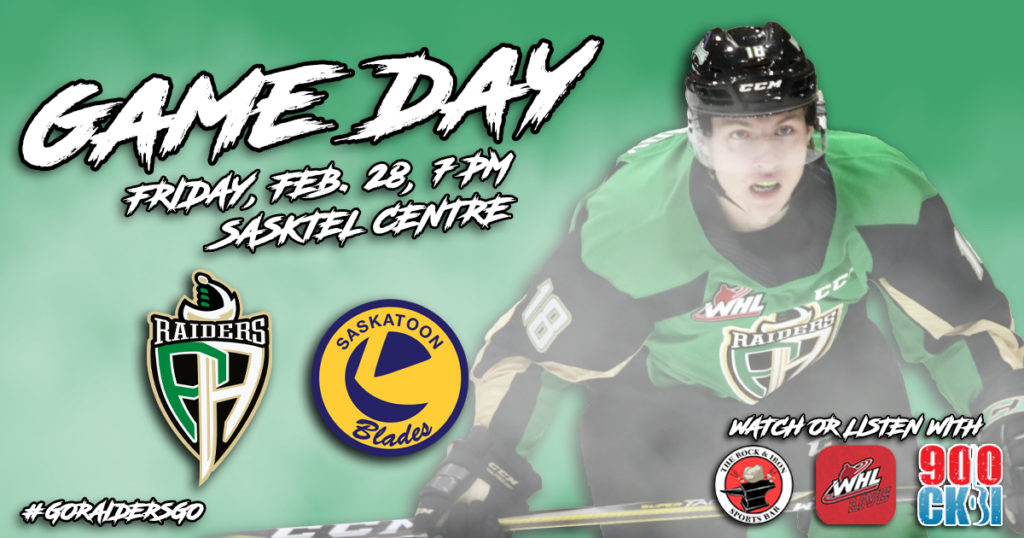 RAIDER REVIEW: The Raiders (32-16-5-4) head to Saskatoon tonight to battle the Blades (30-22-2-3) to open a home-and-home series. Last weekend, the Raiders downed the Wheat Kings 2-1 in Brandon. Ilya Usau and Ozzy Wiesblatt each tallied power-play goals in the win. Wiesblatt and Aliaksei Protas both had two-point nights for the Raiders. Max Paddock stopped 19 shots to pick up the win.

NEW HIGH: Max Paddock picked up his 20th win of the season in his hometown of Brandon on Saturday night, which is a new career high. The goaltender’s previous high was 19 set during the 2017-18 season with the Regina Pats. In that season, Paddock posted a 19-7-1-1 record with a 2.90 goals-against average and a 0.904 save percentage.

STILL STREAKING: Ilya Usau’s goal on Saturday night in Brandon extended his goal-scoring streak to four games and point streak to six games. Both streaks are the longest of his rookie season in the WHL. Over this six-game streak, the 2020 NHL Draft prospect has four goals and four assists to bring his season total to 21 goals and 25 assists in 51 games.

POWER-PLAY GOALS: Ozzy Wiesblatt recorded his 10th power-play goal of the season on Saturday night in Brandon, which continues to lead the team. The 2020 NHL Draft prospect has now tallied 15 goals on the power play in his WHL career. The Raiders have now had at least one player score 10 or more power-play goals in three consecutive seasons.

HELPING HANDS: Aliaksei Protas had two assists on Saturday night in Brandon, bringing his total to 44 on the season. He passed Simon Stransky for the most assists by a Raiders import forward in the past five years. Stransky registered 43 assists during the 2015-16 season. Protas now has the highest assist total for a Raiders import since Leon Draisaitl’s 67 helpers during the 2013-14 campaign.

NEXT UP: The Raiders close out their home-and-home series with the Blades on Saturday night at the Art Hauser Centre. Puck drop is 7 p.m. The Raiders wrap up the week on Sunday when they host the Moose Jaw Warriors at 6 p.m. Tickets for both games are available at the Raiders Office and online here.