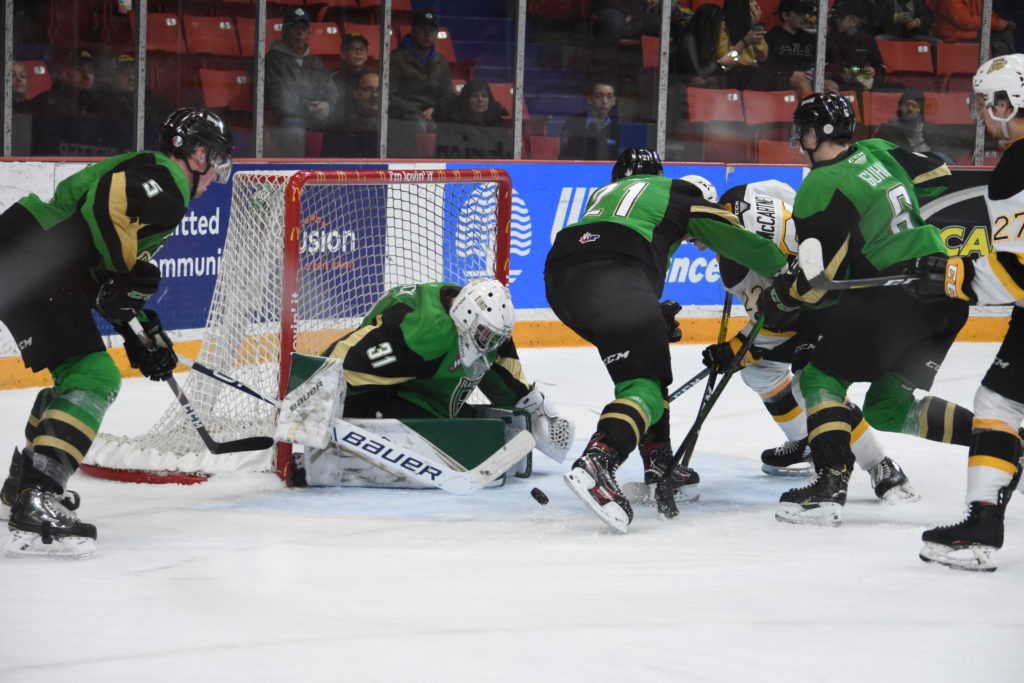 Brandon, MB – The Prince Albert Raiders (32-16-5-4) picked up two power-play goals and were perfect on the penalty kill as they knocked off the Brandon Wheat Kings (31-21-3-2) 2-1 at Westoba Place on Saturday night.

Ozzy Wiesblatt had a goal and an assist for the Raiders in the win. Aliaksei Protas also registered a pair of assists. Ilya Usau tallied the Raiders’ other goal.

Both of the Raiders’ goals came on power plays, finishing the game two-for-five with the man advantage. The Raiders killed off all five of their penalties as well.

The teams battled to a scoreless opening period. Brayden Watts had the Raiders’ best chance of the period with a one-timer from the bottom of the left faceoff circle that was turned aside by Jiri Patera.

The Raiders got on the board 1:58 into the second period. After Ben McCartney took a double minor for slew-footing at the end of the first, Dom Schmiemann was whistled for tripping. Usau took advantage of the five-on-three after Wiesblatt was stopped by Patera. Usau was at the top of the crease and banged in the rebound for his 21st of the season to give the Raiders a 1-0 advantage.

SCORES! Ilya Usau sticks with it and finds the back of the net from the top of the crease!

Just after the Raiders killed off a Wheat Kings’ two-man advantage, they doubled their lead on another power play. Watts started a passing play by dropping a pass for Protas. He whipped the puck across the zone to Wiesblatt who blasted a one-timer past a sliding Patera for his 22nd of the season, putting the Raiders up 2-0.

SCORES! @ozzywiesblatt buries the cross-ice pass from Aliaksei Protas on the power play!

Brandon thought they got on the board late in the second period on a power play of their own. McCartney got the puck past Max Paddock, but the Wheat Kings forward batted the puck into the net with his glove. The goal was waved off on the ice.

The Wheat Kings got one that counted 4:18 into the third period on delayed Raiders penalty. Braden Schneider took a pass on the right wing with some space and was able to skate in and snap a shot past Paddock to make it a 2-1 game.

Late in the third, Brandon thought they tied the game with 4:10 to play. A bouncing puck found its way into the Raiders’ crease on a Wheat Kings power play. Luka Burzan kicked the puck into the goal from the blue paint. Upon further review, the goal was waved off since the puck was in the crease when Burzan kicked it.

As the Wheaties pressed for the equalizer, the Raiders were able to keep them at bay and out of the zone. Brandon was unable to pull Patera for the extra attacker until the final 30 seconds of the game and Paddock denied a final chance from Burzan to wrap up the win.

That’s game! Raiders pick up a big win in Brandon, knocking off the Wheat Kings 2-1!

We’re back at it on Friday night when we head to Saskatoon to take on the Blades.#GoRaidersGo #BDNvsPA pic.twitter.com/3e2KTndJnf

Paddock finished the game with 19 saves to pick up his 20th win of the season. It marks the first time the Brandon, MB product has recorded 20 wins in a season. His previous high was 19 during the 2017-18 season. Patera stopped 28 shots in the loss for the Wheat Kings.

The Raiders are off until Friday night when they open a home-and-home series with the Saskatoon Blades at SaskTel Centre. Game time is 7 p.m. The two teams meet again on Saturday night at the Art Hauser Centre. Puck drop is 7 p.m.

That weekend ends on Sunday with an evening game against the Moose Jaw Warriors. The game begins at 6 p.m. Tickets are available at the Raiders Office and online here.