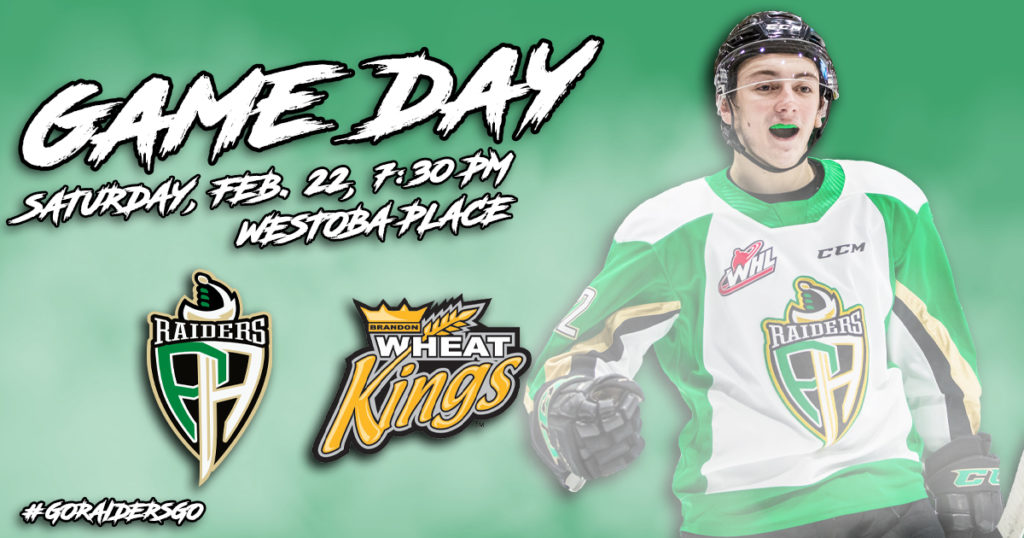 RAIDER REVIEW: The Raiders (31-16-5-4) head to Brandon to take on the Wheat Kings (31-20-3-2) at Westoba Place tonight. On Tuesday night, the Raiders knocked off the Regina Pats 5-2 at the Art Hauser Centre. Aliaksei Protas had a four-point night, while Ozzy Wiesblatt picked up a goal and two assists. Spencer Moe and Ilya Usau each had two points. Max Paddock stopped 15 shots to beat his former team.

CLINCHED: With the Regina Pats’ loss on Friday night, the Raiders have clinched their spot in the 2020 WHL Playoffs. The Raider have now made the WHL Playoffs for three consecutive seasons and four out of the last five postseasons.

The defending WHL Champion @PARaidersHockey have clinched a berth in the 2020 #WHLPlayoffs!

HITTING THE CENTURY MARK: Ozzy Wiesblatt recorded the 100th point of his WHL career on his second-period goal on Tuesday night. His three-point night pushed him to 101 points for his career, giving him 37 goals and 64 assists in 121 games. This season, the 2020 NHL Draft prospect has blown past his rookie offensive totals with 21 goals and 40 assists while playing in all 56 games.

REACHING 20: Ilya Usau became the fourth Raider this season to reach the 20-goal plateau with his third-period marker. He also extended his point streak to five games, which is the longest of his rookie season. Over the five-game stretch, the 2020 NHL Draft prospect has three goals and four assists.

HIT ‘EM WITH THE FOUR: Aliaksei Protas recoded a four-point game for the second time this season on Tuesday night. His other four-point night was also a two-goal, two-assist effort on Nov. 2 in Moose Jaw against the Warriors.

ROOKIE NUMBERS: Landon Kosior reached 20 points in his rookie season when he picked up his 15th assist of the year on Tuesday. Kosior is the first Raiders rookie defenceman to reach the 20-point mark since Tomas Andrlik had two goals and 18 assists during the 2013-14 season.

DOUBLING UP: With his 18th goal of the season on Tuesday night, Spencer Moe has doubled his previous career best for goals in a single campaign. The Calgary, AB product scored nine goals during the 2017-18 and 2018-19 seasons for his previous best.

NEXT UP: The Raiders open a home-and-home series with the Saskatoon Blades on Friday night at SaskTel Centre. Game time is 7 p.m. The two teams meet again on Saturday night at the Art Hauser Centre for a 7 p.m. puck drop. Tickets are available online here.