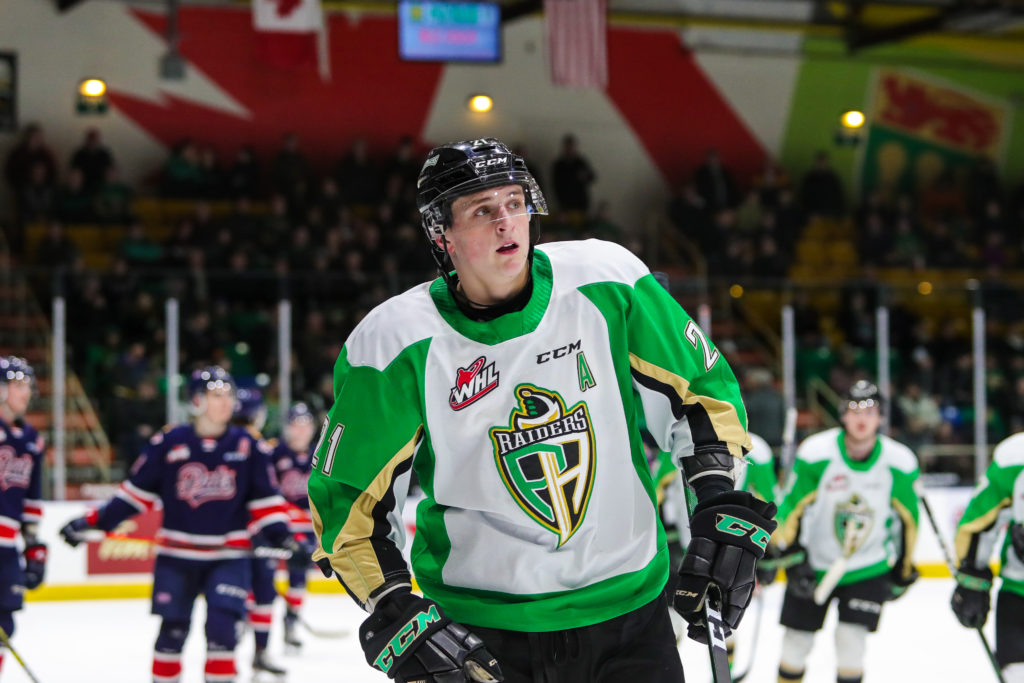 The Raiders extended their winning streak to three games and have won seven of their last nine games.

Protas got the scoring started with 7:22 to play in the first period. Zack Hayes’ shot was stopped by goaltender Donovan Buskey, but the puck found Protas’ stick at the side of the goal. The Belarusian forward banged in the rebound for his 27th goal of the year to make it 1-0.

Related Links
FRANK DUNN TOYOTA HIGHLIGHTS GALLERY POST-GAME INTERVIEWS
Before the end of the opening 20 minutes, Protas added another. With the Raiders on the power play, Wiesblatt had his attempt on goal stopped by Buskey. While tied up with a Pat in front of the goal, Protas was able to kick the puck in from outside of the blue paint to record his 28th of the season, giving the Raiders a 2-0 lead after the first.

Regina got on the board at the 3:37 mark of the second period. Riley Krane chipped a blocked shot out of his own end to set himself up on a shorthanded breakaway. Krane made a move to his forehand to beat Max Paddock and bring the Pats back within one.

The Raiders restored their two-goal advantage with 4:43 to play in the middle frame with another power-play marker. Wiesblatt was left alone as he came off the bench and skated into a pass from Protas. The Calgary product fired a wrister that beat Buskey for his 21st goal of the year. The goal was also Wiesblatt’s 100th career point in the WHL.

With his second-period goal, @ozzywiesblatt now has 100 career points!

Before the end of the period, the Raiders almost increased their lead. Daniil Stepanov, Michael Horon, and Tyson Laventure entered the zone on an odd-man rush. Stepanov and Horon played give-and-go, but Buskey was able to reach his stick back to rob Stepanov of a sure goal to keep it a 3-1 game after two periods.

In the third, the Raiders made it a three-goal game 5:58 into the final period. Wiesblatt carried the puck behind the Pats’ goal and drew the attention of the defence. He made a cross-crease pass to an uncovered Usau who tapped in the backdoor feed for his 20th goal of the season, putting the Raiders up 4-1.

Just more than two minutes later, the Pats cut the lead back down to two. Kyle Walker carried the puck around the zone and behind the Raiders goal. He came out to the left of the net and his wraparound attempt was stopped by a diving Paddock. The rebound came right back to him and Walker threw it back on goal. It deflected off Paddock and over the goal line to make it 4-2.

The Raiders iced the game with an empty-net goal with 56 seconds to play. Moe got the puck around a Pats defender and fought to regain control all the way down the ice. As the two battled, the puck cross the goal line as they both crashed into the net, wrapping up the scoring at 5-2 with Moe’s 18th of the year.

Paddock picked up his 19th win of the season with a 15-save effort against his former club. Buskey made 34 saves for the Pats in the loss.

The Raiders are back in action on Saturday night in Brandon to take on the Wheat Kings. Game time is 7:30 p.m. at Westoba Place. Head to The Rock And Iron Sports Bar to watch the game, or listen to Trevor Redden on 900 CKBI.

The next Raiders’ home game is on Saturday, February 29 against the Saskatoon Blades. Puck drop is 7 p.m. Tickets are available at the Raiders Office and online here.