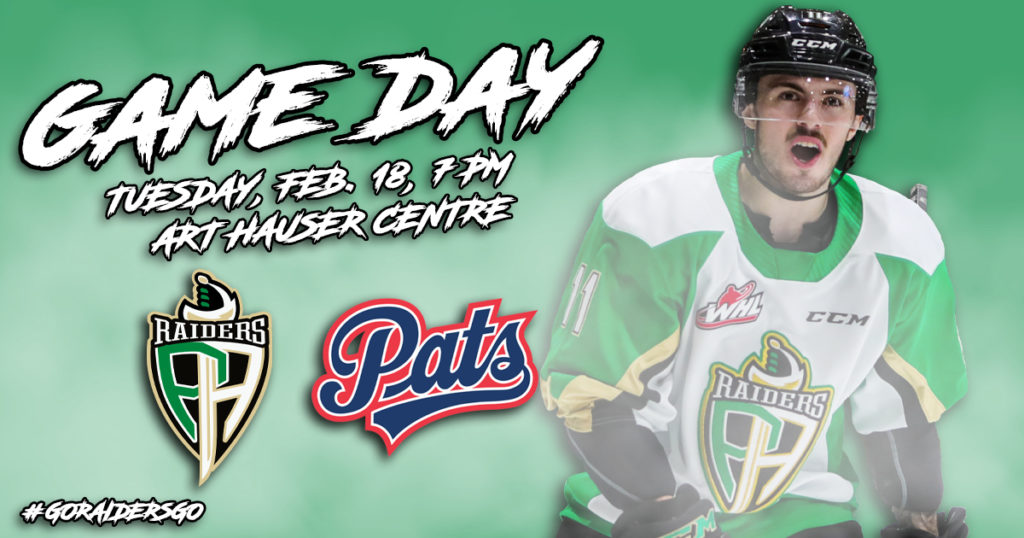 RAIDER REVIEW: The Raiders (30-16-5-4) close out their season series with the Regina Pats (19-29-3-2) tonight at the Art Hauser Centre. In their last outing, the Raiders picked up a 4-1 win over the Brandon Wheat Kings at the Art Hauser Centre. Aliaksei Protas had a goal and an assist in the win. Tyson Laventure, Spencer Moe, and Ilya Usau also scored for the Raiders. Max Paddock stopped 26 shots for the win.

30 FOR 30: On Saturday, the Raiders recorded their 30th win of the season. This is the third consecutive season the Raiders have reached the 30-win plateau. The Raiders have also picked up at least 30 wins in seven of the past eight seasons.

WEEKLY HONOURS: Max Paddock was named the WHL Eli Wilson Goaltending Goaltender of the Week on Monday.  Paddock started and picked up the win in both of the Raiders’ games last week. The Brandon, MB product allowed just one goal over the two games against the Swift Current Broncos and the Brandon Wheat Kings. Since joining the Raiders, Paddock has posted an 8-2-02 record with a 1.48 goals-against average and 0.944 save percentage in 12 appearances.

TWO FIRSTS: Tyson Laventure’s goal on Saturday night was his first at the Art Hauser Centre. The Lloydminster, AB product’s goal was also the first game-winning marker of his WHL career. Laventure has five goals and an assist in 34 games this season.

STREAK SNAPPED: Spencer Moe ended a 15-game goalless drought on Saturday against the Wheat Kings. Moe’s last goal came on January 7 against the Red Deer Rebels.  The Calgary, AB product is tied for fourth in team scoring with 17 goals and 26 assists.

SCORING IN BUNCHES: Aliaksei Protas recorded his team-leading 21st multi-point game on Saturday night. In those 21 games, the Washington Capitals prospect has tallied 51 of his 66 points on the year.

NEXT UP: The Raiders head to Brandon on Saturday night to take on the Wheat Kings. Game time is 7:30 p.m. The next Raiders’ home game is on Saturday, February 29 against the Saskatoon Blades. Tickets are available at the Raiders Office and online here.