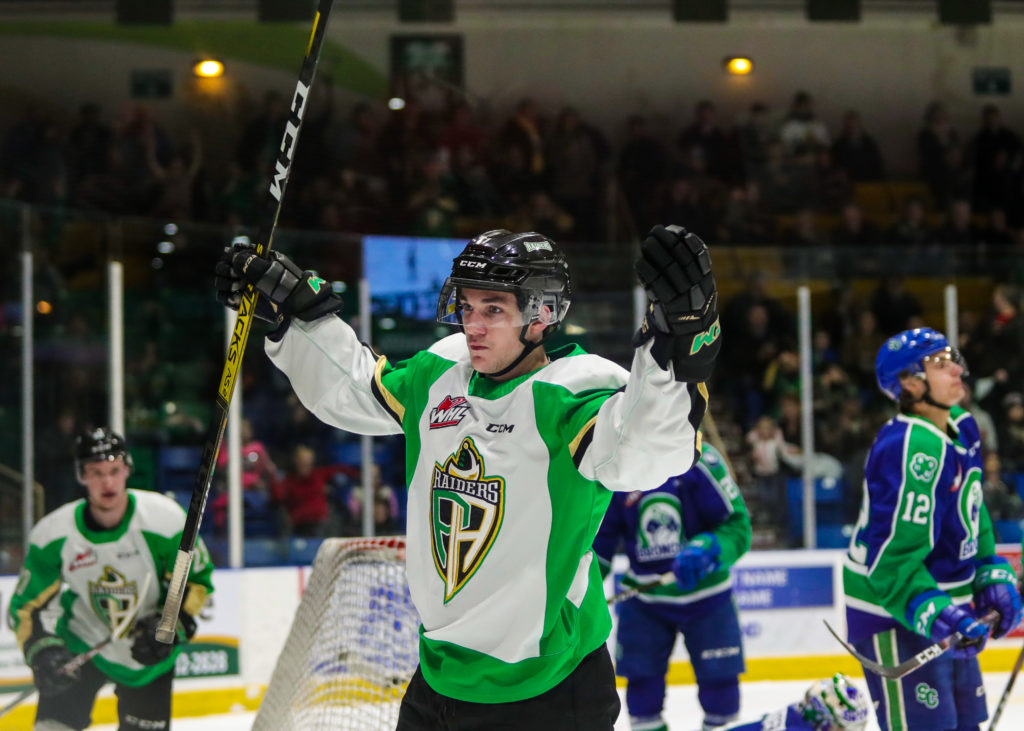 The Raiders defence limited the Broncos to just 13 shots on goal in the contest as Max Paddock picked up his fourth shutout of the season.

Offensively, Aliaksei Protas had a goal and two assists to pace the Raiders. Ilya Usau (one goal, one assist) and Ozzy Wiesblatt (two assists) each chipped in two points. Michael Horon, Matthew Culling, and Brayden Watts also scored in the win.

With their win and a Winnipeg loss, the Raiders are back in the top spot of the East Division with a two-point advantage on the ICE.

While the Raiders enjoyed a 6-1 advantage early on the shot clock, the one save Paddock made was a beauty. On a three-on-two rush, Aiden Bulych received a cross-ice pass and put a shot on goal, but Paddock slid over and turned aside the shot with his blocker.

Horon got the scoring started with 5:33 to play in the opening period. Zack Hayes’ point shot got through traffic and was stopped by Isaac Poulter. The rebound bounced to the left side of the goal and Horon banged home the rebound for his fourth of the season to make it 1-0.

Less than two minutes later, the Raiders converted on a power play to double their lead. From the right side of the goal, Protas turned and fired a no-look pass to Usau who took a second to collect the puck and fire a shot over a sprawling Poulter for the rookie’s 18th goal of the year, giving the Raiders a 2-0 lead after the first.

Protas got in the goal column 4:42 into the second period on the power play. Wiesblatt cut through the neutral zone and drove down the right wing. He found Protas skating to the net and hit the Washington Capitals prospect with a pass. Protas made a quick move to his backhand and slid the puck through Poulter’s five-hole to give the Raiders a 3-0 lead with his team-leading 25th goal.

The Raiders made it 4-0 when Culling struck against his former team. The Regina product got the puck in the corner at the goal line and got a shot through Poulter from the bottom of the faceoff circle for his seventh goal of the campaign.

Late in the second, Watts wrapped up the scoring in the game. At the end of a shift, he fought off a check in the corner and skated into the slot. The overager picked the corner over Poulter’s trapper for his 23rd goal of the season to make it 5-0.

Paddock faced his busiest period of the game in the third as he turned aside eight shots, including a partial breakaway by Hayden Ostir, to preserve his shutout and 17th win of the season.

Poulter finished the game with 25 saves in the loss.

The win gave the Raiders a four-game sweep of the season series against the Broncos. In those four games, the Raiders outscored Swift Current 17-3.

The Raiders are back at the Art Hauser Centre on Saturday night as the Brandon Wheat Kings come to Prince Albert for a key East Division clash. Four points separates the two clubs in the East Division standings. Puck drop is 7 p.m. Tickets are available at the Raiders Office and online here.