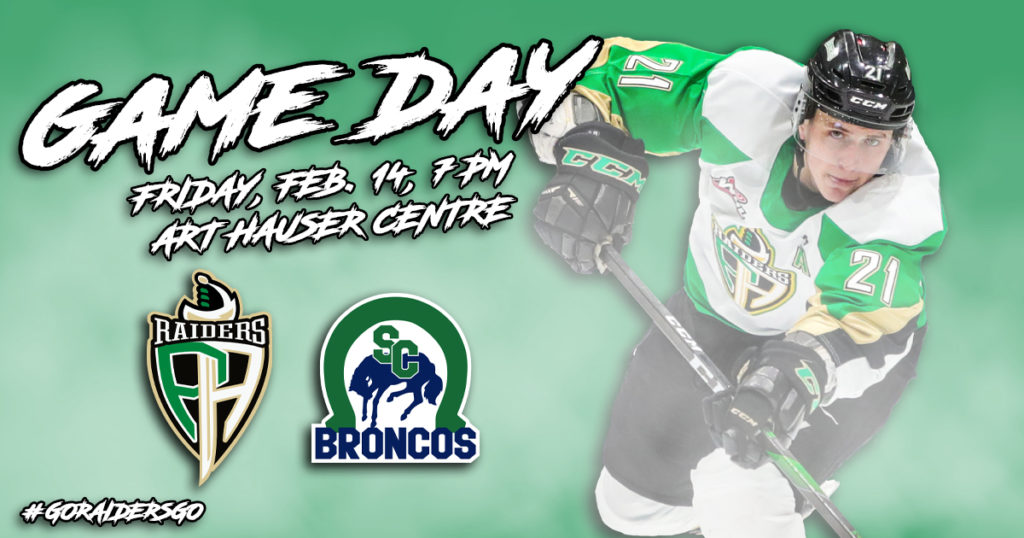 RAIDER REVIEW: The Raiders (28-16-5-4) return to the Art Hauser Centre tonight to take on the Swift Current Broncos (10-37-1-3). In their last outing, the Raiders dropped a 3-1 decision to the Hurricanes in Lethbridge on Saturday night. Zack Hayes scored the Raiders’ lone goal of the contest. Oliver Okuliar had a pair of goals to pace the Hurricanes. Max Paddock stopped 34 shots in the loss.

OPENING SALVO: For the third time this season, Zack Hayes tallied the first goal of the game. The Raiders captain only trails Kaiden Guhle in that category as the 2020 NHL Draft prospect has struck first four times this year. When scoring first, the Raiders have posted a 21-3-3-1 record this season.

POSITIVE: Zack Hayes is also making his impact felt in his own zone. The Calgary product is tied for seventh in the WHL with a plus-31 rating. He is one of just 10 players in the WHL to have a plus-minus rating of 30 or higher.

ROOKIE NUMBERS: With an assist on Saturday night in Lethbridge, Ilya Usau tied Aliaksei Protas’ rookie total of 40 points from last season in 14 fewer games. Prior to Protas, Usau has the most points as a Raiders rookie since Simon Stransky had 42 during the 2014-15 campaign. Usau has 17 goals and 23 assists and is sixth in rookie scoring in the WHL.

DOUBLE DIGITS: Saturday night’s game was Max Paddock’s 10th appearance for the Raiders since being acquired at the WHL Trade Deadline. In Paddock has posted a 6-2-0-2 record with a 1.67 goals-against average and a 0.940 save percentage.

NEXT UP: The Raiders are back at the Art Hauser Centre tomorrow night for a key East Division battle with the  Brandon Wheat Kings. Puck drop is 7 p.m. Tickets are available at the Raiders Office and online here.