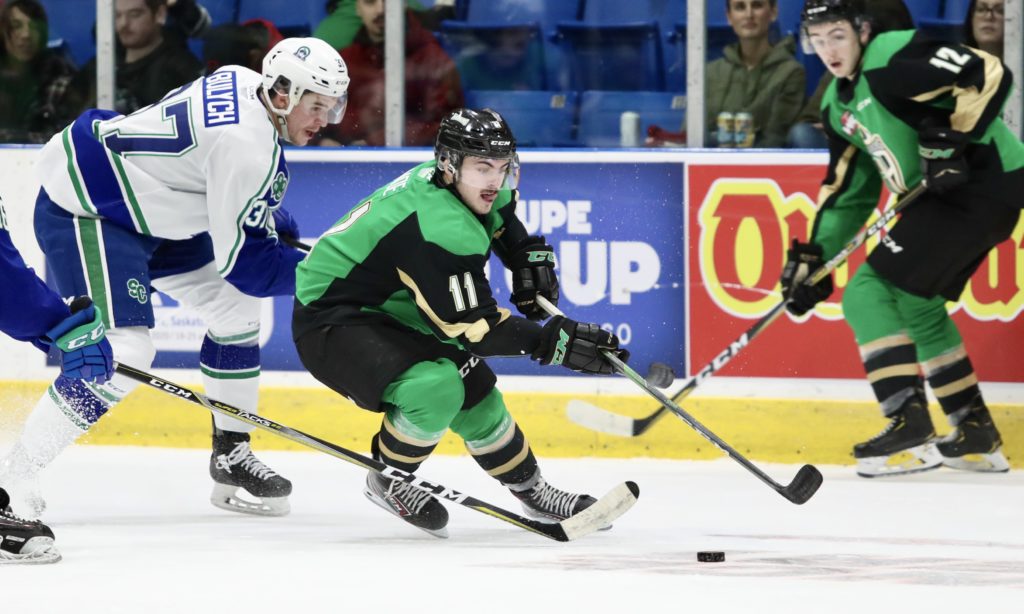 Prince Albert, SK – The Prince Albert Raiders are back at the Art Hauser Centre for a pair of games this weekend.

The Raiders return home following a week-long trip through Alberta as they finished off the road portion of their schedule against the Central Division.

The trip started last Wednesday with a 4-3 overtime win over the Medicine Hat Tigers at the Canalta Centre. Aliaksei Protas tied the game with seven seconds left in regulation then won it in eight seconds into the extra frame.

On Friday, the Raiders dropped a 2-1 game to the Calgary Hitmen at the Scotiabank Saddledome. Brayden Watts scored the Raiders’ lone goal of the contest despite outshooting the Hitmen 40-28 in the loss.

The trip concluded on Saturday with a 3-1 loss to the Lethbridge Hurricanes at the ENMAX Centre. Zack Hayes had the Raiders’ only goal of the game.

This week, the Raiders play two games at the Art Hauser Centre on Friday and Saturday night. Friday night sees the Swift Current Broncos (10-36-1-3) make their final trip to Prince Albert this season. The Raiders have won all three games of the season series against the Broncos to date, all by a 4-1 score. Protas leads the season series in scoring with a goal and four assists.

On Saturday night, the Raiders host the Brandon Wheat Kings (27-19-3-2) in a key East Division matchup. The teams have split the two meetings so far this season with both home teams picking up the win. Hayes and Eric Pearce each have a goal and an assist in the season series, while Ilya Usau has a pair of assists to pace the team at two points.

Next week, the Raiders will be hosting public skate on Monday, February 17 for Family Day as part of the Prince Albert Winter Festival. The skate will be held at Crescent Heights Community Club rink from 4 to 6 p.m.