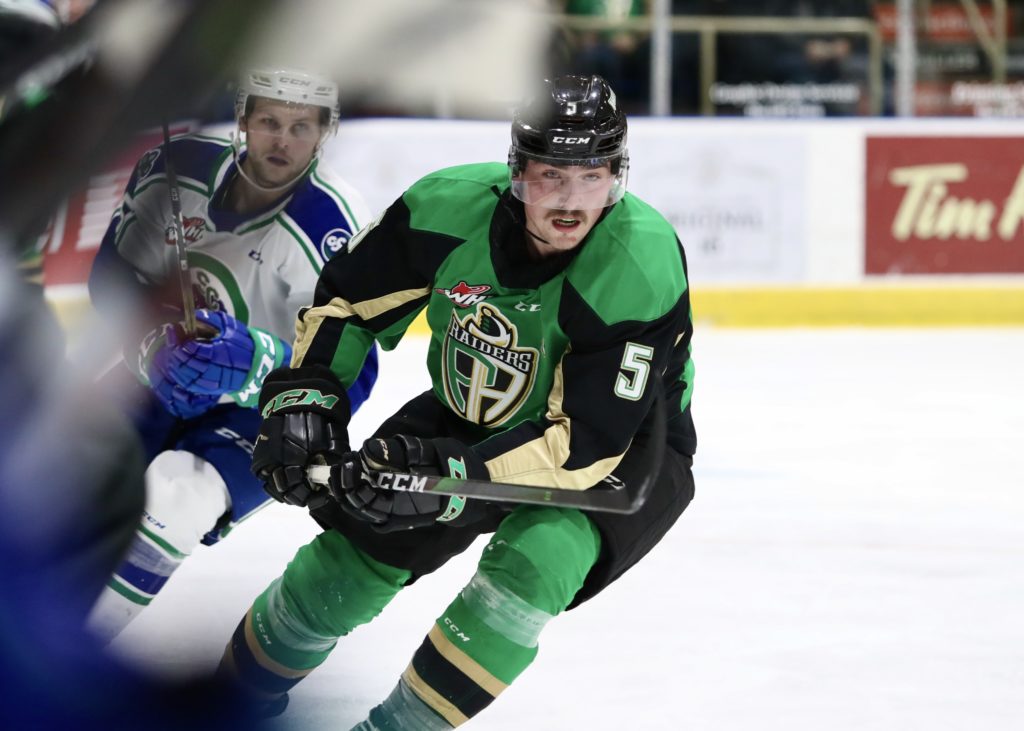 Swift Current, SK – The Prince Albert Raiders (27-14-5-4) scored three goals in the second period en route to a 4-1 win over the Swift Current Broncos (10-34-1-3) at the Innovation Credit Union i-Plex on Saturday night.

Zack Hayes, Evan Herman, Jeremy Masella, and Ozzy Wiesbatt all scored for the Raiders in the win. Hayes also added an assist for a two-point night, while Kaiden Guhle added a pair of assists.

Early in the opening period, Reece Vitelli behind the Broncos’ defence after one of their rearguards fell at the blueline. Vitelli had a breakaway, but he was denied by Isaac Poulter

The Raiders appeared to open the scoring on a power play at the 9:30 mark. Guhle set up Hayes with a one-timer and the overager beat Poulter from the point. However, while Guhle’s pass was coming across, the Raiders were called for slashing in front of the Broncos net and the goal was waved off on the ice due to the delayed penalty.

Just 45 seconds into the second, the Raiders got the scoring started on the power player. Guhle and Hayes traded passes at the blueline before Guhle put a shot towards the net. Wiesblatt was able to get a stick on the shot to deflect it past Poulter for his 20th goal of the year, making it 1-0.

SCORES! Kaiden Guhle puts a shot towards goal and @ozzywiesblatt gets a piece of it to open the scoring on the power play!

Midway through the middle frame, the Raiders struck again on the man advantage. Guhle set Hayes up with a one-timer and the Raiders captain blasted the puck from the point to the back of the net for his fifth goal of the year and second consecutive game with a power-play goal to give the Raiders a 2-0 lead.

SCORES! Hayeser with the laser! @hayesie24 with another power-play goal as he one-times one from the point!

Masella increased the Raiders’ lead with 7:35 to play in the second. He forced a turnover by keeping a Broncos’ clearing attempt in at the blueline. Masella’s shot from the point got through a Justin Nachbaur screen in front of Poulter to put the Raiders up 3-0 with the overage defenceman’s fourth goal of the year.

SCORES! @jeremy_masella gets one through a screen in front!

Late in the third period, Matéj Toman broke Carter Serhyenko’s shutout attempt. Garrett Sambrook found Toman in front of the goal. Toman’s initial shot was blocked, but he collected his own rebound and beat Serhyenko to make it a 3-1 game.

The Raiders ended any hope of a comeback with a 1:46 to play. Herman intercepted a pass and used his speed to skate the puck into the empty net for his ninth goal of the year, rounding out the scoring at 4-1.

Seryhenko picked up his sixth win of the season with a 23-save effort against the Broncos. Poulter finished with 29 saves in the loss.

We’re back in action on Wednesday night as we begin a week-long trek through Alberta in Medicine Hat.#GoRaidersGo #SCvsPA pic.twitter.com/9oTn1E6sPx

The Raiders are off until Wednesday night when they open a week-long trip through Alberta against the Medicine Hat Tigers at the Canalta Centre. Game time is 7 p.m. Head to The Rock And Iron Sports Bar to watch, or listen on 900 CKBI with Trevor Redden.

The next Raiders’ home game is on Friday, February 14 when the Broncos make their final trip of the season to the Art Hauser Centre. Puck drop is 7 p.m. Tickets are available at the Raiders Office and online here.