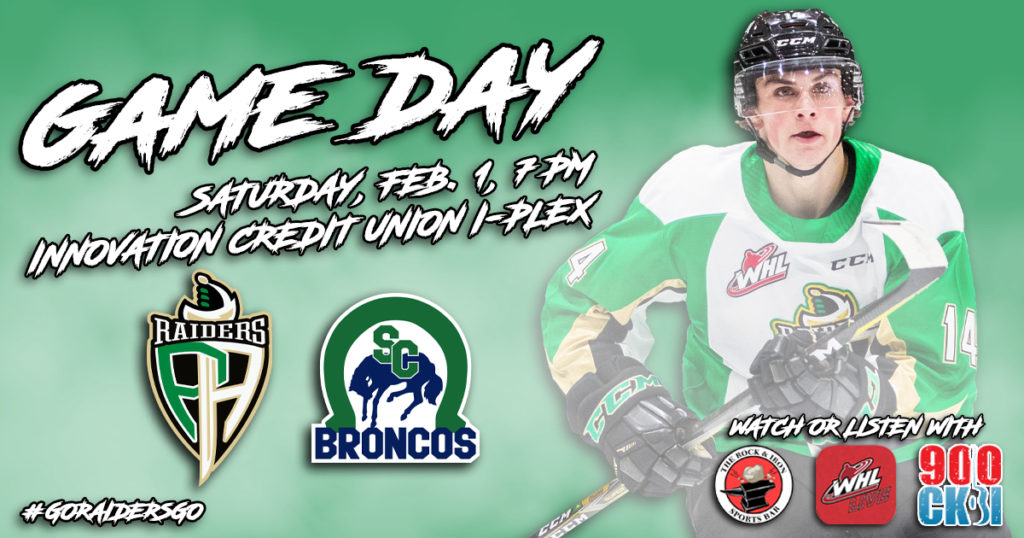 RAIDER REVIEW: The Raiders (26-14-5-4) head to Swift Current tonight to take on the Broncos (10-33-1-3) at the Innovation Credit Union i-Plex. Last night at the Art Hauser Centre, the Raiders downed the Lethbridge Hurricanes on the strength of Brayden Watts’ two goals. Kaiden Guhle and Aliaksei Protas also had a pair of assists. Ilya Usau and Zack Hayes scored the Raiders’ other goals.

JANUARY RECAP: The Raiders finished the first month of 2020 with a 6-2-2-3 record. They close out the month on a 10-game point streak while also earning at least a point in 11 of the 13 games in the month. Ozzy Wiesblatt led the team offensively in January with four goals and nine assists while playing in all 13 games.

20 FOR 27: It took Brayden Watts 300 games in the WHL, but the winger from Bakersfield, CA reached the 20-goal plateau for the first time in his career on Friday night. Watts’ second goal of the night was the game winner, which put him in a tie for top spot on the team with five winning markers this season. His two goals on the night has him at 21 tallies this season as he continues his career-best offensive campaign with 45 points.

POWERING UP: Zack Hayes scored the first power-play goal in the 257th game of his WHL career on Friday night against the Hurricanes. The overage defenceman also set a new career high for goals in a season as he tallied his fourth of the campaign. It was Hayes’ first goal in 29 games, with his last coming on November 8 against the Brandon Wheat Kings.

NEXT UP: The Raiders start an Alberta road trip on Wednesday night in Medicine Hat against the Tigers. Game time is 8 p.m. The next Raiders’ home game is on Friday, February 14 against the Broncos in the final game of the season series. Then, the Raiders face off against the Brandon Wheat Kings on Saturday, February 15. Puck drop for both games is 7 p.m. Tickets are available online here.