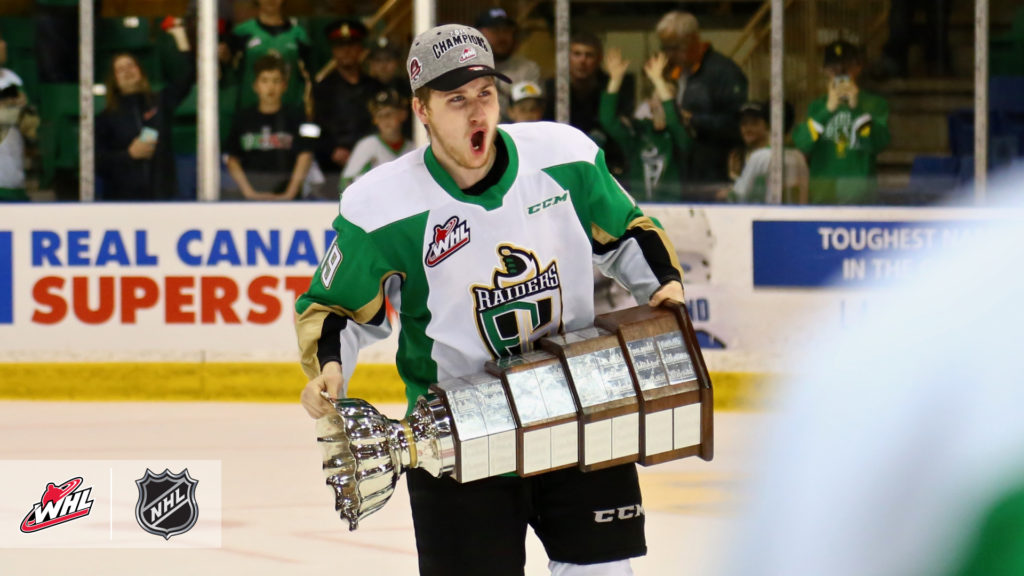 Ozzy Wiesblatt is a lot of things – but above all, he’s a winner.

Yeah, he was a top-25 selection in 2017 WHL Draft. You would also be correct to point out that NHL Central Scouting now has him ranked 19th among North American skaters heading into the 2020 NHL Draft.

Sure, he scored 15 goals in his WHL rookie season with the Prince Albert Raiders and he played a regular contributing role in the post-season.

Heck, he hit the 25-goal plateau and the 70-point mark in his sophomore season in Hockey Town North.

While all of those personal statistics and accolades are nice accomplishments to hang one’s hat on, none of it compares to the bare bones of winning.

Ozzy Wiesblatt is a winner, and he will be the first one to tell you that. It isn’t an arrogant statement, it’s just pure confidence. And that distinction is important.

“I’m a winner, I’ve experienced winning,” Wiesblatt said. “That’s what people want – they want winners and that’s what I am.”

“Whichever team drafts me, I am going to give them my all. I’m ready for it and am prepared for all the hard work that comes after.”#yyc‘s Ozzy Wiesblatt is ready for the #NHLDraft. https://t.co/r0qN4eTxwR

The 18-year-old from Calgary makes it sound so simple. But truth be told, it wasn’t simple.

Wiesblatt’s most treasured experience with winning came in 2019. As a 16-year-old, he was in his rookie season in the WHL, but he was no ordinary freshman. Trusted by veteran bench boss Marc Habscheid, the young Wiesblatt found himself playing a regular shift against older competition and not only in the regular season, but in the heat of the Raiders electrifying playoff run.

“He played a key role on a WHL Championship team at 16 years old,” said Sam Cosentino, NHL Draft expert for Sportsnet, and a colour analyst for the CHL on Sportsnet. “That doesn’t happen very often. A lot of times, those guys are at the back of the bus – they’re either fighting to get into the lineup or they’re fighting for fourth-line minutes. But because of his energy, his passion, his drive, and his skill, it allowed Marc Habscheid to play him as a third-line guy. That’s where he really jumped off the page for me.

“It’s his work ethic, his energy, and his compete – those are the things that stick out with him automatically. Then, as you continue to watch the play, you understand that there is a really good skillset there – the ability to get the shot off in a hurry, a quick release, he can beat you going wide, he has no problem going to the middle of the ice.”

An energetic right winger with more than enough talent to play up the lineup, Wiesblatt served his coach well during the spring of 2019, providing reliable minutes and 10 points in 23 WHL playoff games. After a 4-0 sweep of the Red Deer Rebels in the first round, the second round was a six-game battle with East Division rival Saskatoon. The Eastern Conference Championship turned into a six-game slugfest against the rising Edmonton Oil Kings.

And who could forget the seven-game thrill ride that was the 2019 WHL Championship?

After losing Game 1 to the Vancouver Giants, Wiesblatt and the Raiders rattled off three consecutive victories, including an 8-2 win in Game 3 in Vancouver that would have crushed the souls of most teams. After squeaking out a 1-0 triumph in Game 4, Prince Albert looked primed to cruise to the Ed Chynoweth Cup.

But winning isn’t that easy.

The Giants claimed Game 5. Then they took Game 6. Suddenly, all bets were off.

Game 7 – back and forth they went. Overtime was needed – both teams enjoying glorious opportunities to end it all. Finally, it was the Raiders winning in dramatic fashion in the dying minutes of the first overtime period.

It was far from easy.

And that sort of experience with winning will teach a young player a great deal.

“When you’re going into the league as 16-year-old, you’re not sure what to expect and how hard it actually is,” Wiesblatt said.

In his first year in the WHL, Wiesblatt learned just how difficult it is to win. But he won, and he hasn’t forgotten anything about it.

Though the 2019-20 WHL season was cut short by the COVID-19 pandemic, Wiesblatt had turned into an undisputed leader for the Raiders at the young age of 17. His aforementioned 70 points put him second in team scoring, trailing only 19-year-old Washington Capitals prospect Aliaksei Protas.

“In this day and age, where everyone is so strong and fast, having that level when you can outwork someone no matter the position [is important],” Wiesblatt said. “You need that mindset where you just want it more.

To this point, playing in Prince Albert has paid off in spades for Wiesblatt. He’s won a WHL Championship, he’s enjoyed personal success on the ice, and now here he is – days away from hearing his name called at the 2020 NHL Draft. There was never a doubt in his mind that his journey with the Raiders was going to be a good one.

“When I saw my name get called by Prince Albert, I knew the history they had and the kind of players that went through there, the coaching staff, and the prospects they had coming up,” Wiesblatt said. “I knew we were going to be a really good team.

“When I came in, even at 15, you knew what the energy was and what the goal was at the end of the day – and that was to win. [The Raiders] have shaped me into the person I am today.”

The @PARaidersHockey forward is a tenacious playmaker who won a championship in @TheWHL and is ranked inside the top 20 for the #NHLDraft having scored 25 #CHL goals and 70 points this season.