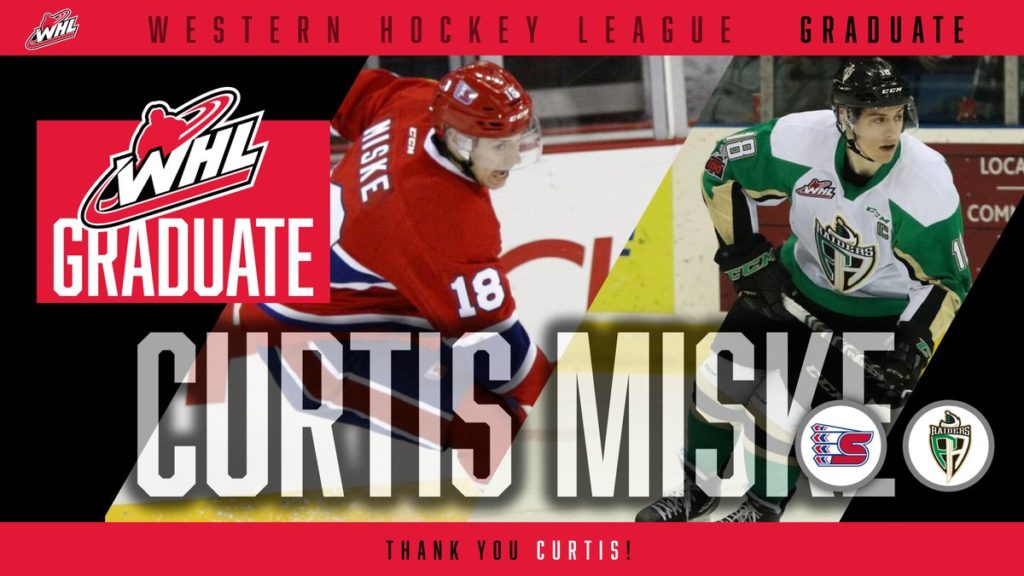 Through the months of July and August, the Western Hockey League is saying ‘thank you’ to its 2018 graduating class. From July 2 to 6, we extended our gratitude to 10 players who concluded their WHL careers in the 2017-18 season.

Prince Albert Raiders captain Curtis Miske had a career high 27 goals, 37 assists, and 64 points in 72 games. Upon the conclusion of the Raiders season he joined the Orlando Solar Bears of the ECHL for their final two regular season games before making three appearances in the playoffs.

Congrats to @C_Miske91 on his WHL career. Miske scored 165 points and went on to play a few games for the @OrlandoHockey of the @ECHL. Best of luck in the future! #WHLAlumni pic.twitter.com/2KR7xSNzIR

Calgary Hitmen forward Jakob Stukel was drafted in the second-round of the 2012 WHL Bantam Draft by the Vancouver Giants. He was traded to the Hitmen in the 2015-16 season where he scored 34 goals and totalled 56 points in 57 games. This past season Stukel set a career high with 37 goals and 64 points. He finished his WHL career with 197 points in 265 games.

Congrats @jakob_stukel on an excellent WHL career, finishing with 197 points (103G-94A) in 265 games over six seasons. Best of luck in the next chapter! #WHLAlumni 🏒🎓 pic.twitter.com/E5VRJqN8CO

Brandon Wheat Kings goalie Logan Thompson won the Ed Chynoweth Cup in 2015-16. This past season he posted a 3.41 GAA and a .908 SVS%. Thompson attended the Washington Capitals Development Camp this week and has committed to the Brock University Badgers for next season.

Congrats Logan Thompson on an excellent WHL career with the @bdnwheatkings Logan has committed to @BrockMensHockey. Good luck! #WHLAlumni 🏒🎓 pic.twitter.com/SNeNILMiUU

Kamloops Blazers defenceman Joe Gatenby won the Ed Chynoweth Cup in 2015-16 with the Kelowna Rockets. He set career highs in goals, assists, and points (13G-46A-59P) and served as the alternate captain last season. Gatenby attended the San Jose Sharks Development Camp earlier this week and committed to the University of New Brunswick Varsity Reds for next season.

Everett Silvertips defenceman Kevin Davis served as their Captain this season. Davis posted a career high with 10 goals, 55 assists, and 65 points in 71 games. He helped his team reach the 2018 Rogers WHL Championship Final. His impressive play earned him an invite to the Colorado Avalanche Development Camp last week.

Congrats @k_davis97 on an excellent WHL career with the @WHLsilvertips. Kevin was a set-up guy recording 149 assists in his career. Best of luck! #WHLAlumni 🏒🎓 pic.twitter.com/Q72Kg9HuBk

Moose Jaw Warriors forward Brayden Burke set career highs with 31 goals and 113 points in 61 games last season. The two-time All-Star also lead the league in assists in 2015-16 was signed by the Arizona Coyotes as a free agent. Burke finishes his WHL career with 338 points in 238 games, a scoring rate of 1.42 points per game.

Congrats to @burkey____19 on his outstanding WHL career. Brayden will be continuing his career after signing with the @ArizonaCoyotes. Best of luck! #WHLAlumni 🏒🎓 pic.twitter.com/BkanozHPtr

Edmonton Oil Kings forward Tomas Soustal set a career high in goals, assists, and points (21G-39A-60P) in 66 games. The Czech Republic native was drafted 60th overall in the CHL Import Draft in 2014 and helped the Kelowna Rockets win the Ed Chynoweth Cup in 2014-15.

Congrats to @TSoustal on an excellent WHL career. Tomas finished his career with 200 points in 295 games. Best of luck in the future. #WHLAlumni 🏒🎓 pic.twitter.com/adWSFfxqxa

Portland Winterhawks forward Alex Overhardt had a career high in goals, assists, and points (15G-25A-40P) in 70 games while posting a plus +/- 22. He finishes his WHL career with 106 points in 273 games, all wearing a Winterhawks Jersey.

Congrats to Alex Overhardt on his great WHL career. Alex finished with 118 points as a member of the @pdxwinterhawks. We wish you the best of luck! #WHLAlumni 🏒🎓 pic.twitter.com/1icx1gaQls

Kelowna Rockets defenceman James Hilsendager matched his output from last season scoring six goals and recording 18 assists for 24 points while serving as the alternate captain. The Lloydminster product played for two clubs in his WHL career, the Rockets and the Regina Pats, where he tasted the post season in five of his six years.

Congrats to @Hillsey4 on a great WHL career. James wore the "A" for the @Kelowna_Rockets this past season. We wish you the best in the future! #WHLAlumni 🏒🎓 pic.twitter.com/7WR3JrcYqy

Kootenay ICE forward Colton Kroeker set career highs with 15 goals, 46 assists and 61 points through 68 games last season. In his six seasons in the league he played for the Regina Pats, Lethbridge Hurricanes, and finally served as the captain for the ICE.

Congrats to Colton Kroeker on a great WHL career. Colton scored 153 points in 265 games. He served as the Captain of the @WHLKootenayICE this past season. Best of luck Colton! #WHLAlumni 🏒🎓 pic.twitter.com/yw7UdSknR2

Thank you to our graduating players for all your contributions on and off the ice. Visit @TheWHL on Twitter daily for new player cards. Weekly recaps of player cards and highlights will appear at WHL.ca each Friday.