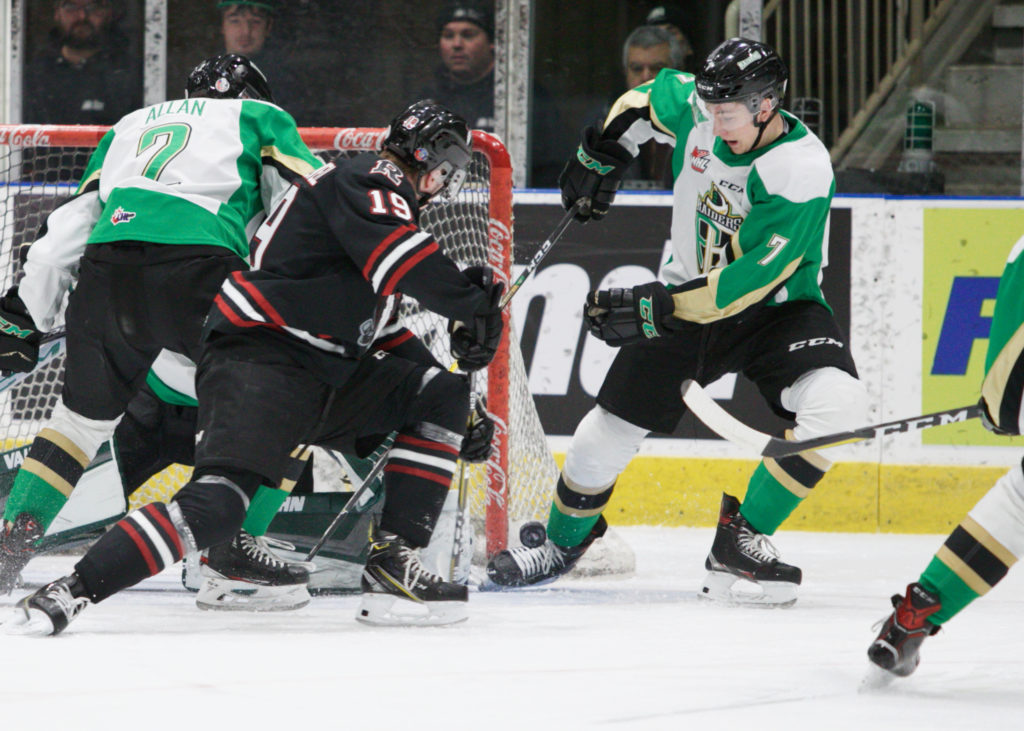 Justin Nachbaur had a goal and two assists in the overtime loss. Landon Kosior added a pair of assists. Evan Herman, Jeremy Masella, and Spencer Moe also scored for the Raiders.

The Raiders opened the scoring for the first time in five games on Tuesday night. Masella got the puck at the left point and crossed the top of the zone. He drove down the right wing and put a backhanded shot on goal that got past Ethan Anders to give the Raiders a 1-0 lead with his third of the season at the 12:19 mark.

In the final minute of the period, the Rebels tied it up on the power play. Christoffer Sedoff faked a shot at the point and cut into the slot. His shot got through the traffic at the top of the crease and past Keegan Karki to make it a 1-1 game after 20 minutes.

In the second, the Raiders pressed to regain their lead. Aliaksei Protas skated the puck into the right corner, leaving the puck for Nachbaur. The Cross Lake, MB product hit Moe with the backdoor pass and the Calgary, AB product lifted a shot over Anders to celebrate his birthday with his 16th goal of the season at the 4:10 mark of the middle frame.

The Rebels tied it again at the 7:40 mark. After an extended period of pressure in the Rebels’ end, Ben King sprung Chris Douglas on a breakaway with a stretch pass. Douglas fired a quick shot past Karki to bring the Rebels back to level at 2-2.

With 8:19 to play in the second, the Raiders took the lead again. Reece Vitelli forced a turnover that Kosior picked off. His shot was from the top of the right faceoff circle was stopped by Anders, but the rebound found Herman’s stick and the The Pas, MB product banged home the rebound for his eighth of the season to give the Raiders a 3-2 advantage at the second intermission.

Red Deer quickly levelled the score in the third period. Josh Tarzwell redirected Ethan Sakowich’s point shot with his foot through Karki to make it a 3-3 game 56 seconds into the third.

The Rebels took their first lead of the game with 8:27 to play. Following a faceoff in the Raiders’ end after an icing call, Arshdeep Bains received a pass in the corner. His shot from the bottom of the faceoff circle went off Karki and in to give the Rebels a 4-3 lead.

Less than a minute later, Sakowich doubled the Rebels’ lead. He recovered the puck along the boards and put it on goal from the bottom of the left faceoff circle. It got through Karki to put the Rebels up 5-3 with 7:48 remaining.

The Raiders responded two minutes later. Brayden Watts’ shot from the hashmarks on the right faceoff circle hit Ilya Usau in front of the goal. Usau was able to get his stick on the puck to knock home the rebound to bring the Raiders back within one with his 13th of the year.

With 3:25 to go, Nachbaur tied the game with a power-play marker. With Vitelli providing a screen in front of the net, Kaiden Guhle blasted a one-timer pass from Kosior onto goal. Anders stopped the shot, but the rebound fell outside of the crease. Nachbaur buried the rebound for his sixth of the season to make it a 5-5 game, sending it to overtime.

In the extra frame, the Raiders had two quality chances to end it. Guhle redirected Ozzy Wiesblatt’s pass on goal, but Anders got a piece of the shot as it slid underneath the goaltender and off the left post.

Later, Zack Hayes beat out an icing call to retrieve the puck in the Rebels’ end. He put a pass behind the net to Vitelli then skated to the front of the net with his stick down. Vitelli hit Hayes with a pass, but Anders stuck out his pad to stop the redirection.

Coming back the other way, Dawson Barteaux left a pick for Bains at the blueline. Bains skated down the right wing, cut across the crease, and tucked in the game-winning goal at the 2:45 mark of the extra frame.

Karki stopped 18 shots in his first start at the Art Hauser Centre. Anders turned aside 30 Raider shots to pick up the win.

Prince Albert now has points in consecutive games since back-to-back wins against the Swift Current Broncos on Nov. 29 and 30.

The Raiders are back in action on Friday night when the Prince George Cougars make their only trip of the year to Prince Albert.

Then on Saturday, the Raiders host the Edmonton Oil Kings on for the third annual Sock Hop Presented By Parkland Ambulance. Fans are asked to bring new pairs of socks to the game for donation to Parkland Ambulance. During the second intermission, they can throw the socks on the ice for a chance to win a new TV.

Both games begin at 7 p.m. Tickets are available online here and the Raiders Office.