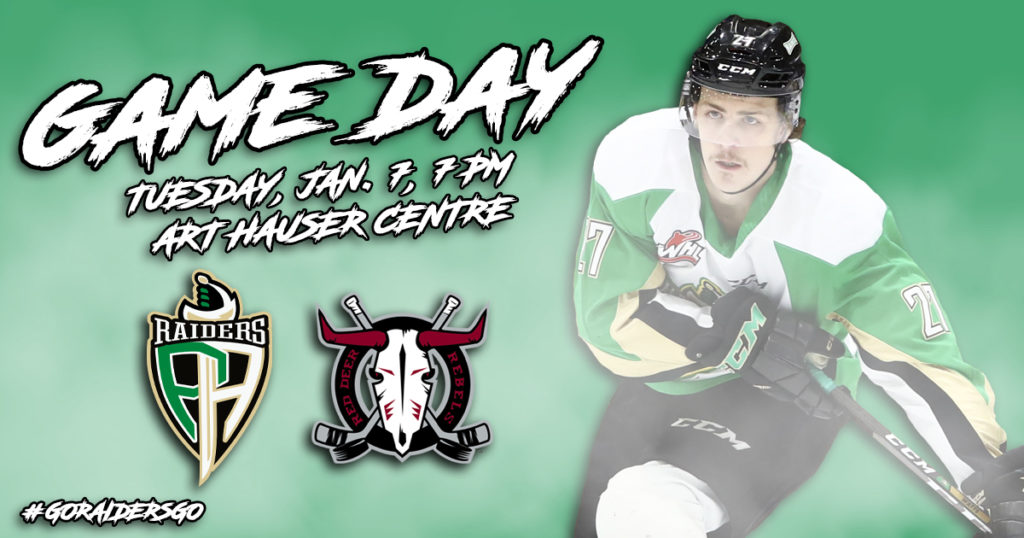 RAIDER REVIEW: The Raiders (21-14-4-1) host the Red Deer Rebels (13-20-1-3) tonight at the Art Hauser Centre. On Sunday night, the Raiders downed the Winnipeg ICE 5-3 at Wayne Fleming Arena. Reece Vitelli led the way with two goals, while Aliaksei Protas, Brayden Watts, and Ozzy Wiesblatt each had a goal and an assist. Keegan Karki earned his first win as a Raider with a 25-save effort.

MONKEY OF HIS BACK: Reece Vitelli’s two-goal performance in his hometown of Winnipeg on Sunday ended an 18-game goalless drought. His last goal came on Nov. 16, 2019 in Regina against the Pats. Sunday was also Vitelli’s second two-goal effort of his career. His other two-goal game was on Feb. 19, 2019 against Prince George while he was with the Everett Silvertips. Since joining the Raiders, Vitelli has four goals and nine assists in 31 games.

PROTAS’ POINTS: Aliaksei Protas reached 51 points on the season with a  goal and an assist on Sunday against Winnipeg. He is the first Raiders import player since Simon Stransky in 2015-16 to reach 50 points in a season.  During that season, Stransky finished with 19 goals and 43 assists in 62 games.

HALF A CENTURY: Ozzy Wiesblatt’s assist on Aliaksei Protas’ goal on Sunday night was the 50th of his career. In 105 career games, the 2020 NHL Draft prospect also has 33 goals for 83 points. The sophomore forward is second on the Raiders in scoring with 17 goals and 26 assists this year.

BACK TO BACK: With a goal on Sunday night, Brayden Watts recorded goals in back-to-back games for the fourth time this season. The last time it happened was during the Raiders’ home-and-home series against the Swift Current Broncos on Nov. 29 and 30. Watts now has 38 points this season, matching his total from last year. He is one point shy of matching his career high of 39 set in 2017-18.

NEXT UP: The Raiders play two home games this weekend. On Friday, they host the Prince George Cougars (10-22-2-3) for the only time this season. The Edmonton Oil Kings (27-7-5-2) visit the Art Hauser Centre on Saturday night. Tickets for both games are available at the Raiders Office and online here.