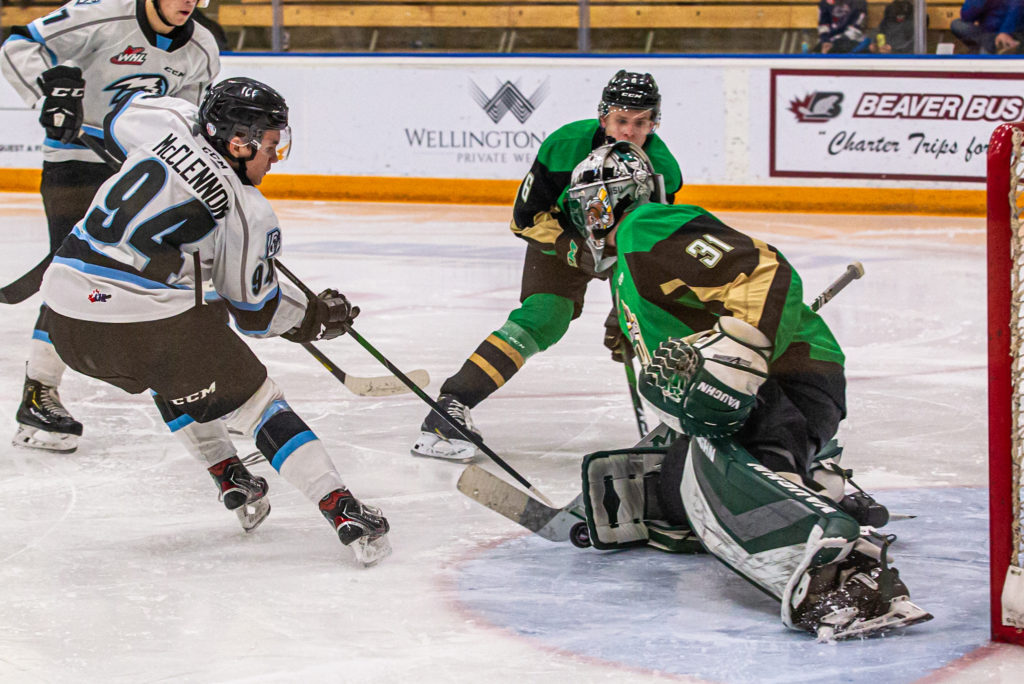 Vitelli was one of five Raiders with a multi-point night. Aliaksei Protas, Brayden Watts, and Ozzy Wiesblatt each had a goal and an assist, while Spencer Moe added two assists.

The win snapped the Raiders’ eight-game losing streak and ended the ICE’s five-game winning streak. The Raiders two points back of the ICE for first place in the East Division.

Winnipeg got the scoring started 1:19 into the contest. Nolan Orzeck found Owen Pederson alone in front of the Raiders goal with a pass. Pederson was able to turn at the edge of the crease and fire a shot past Keegan Karki to give the ICE an early 1-0 lead.

The Raiders used the power play to respond at the 8:34 mark of the period. Moe hit Watts with a pass in the slot. Instead of shooting, Watts found Wiesblatt and the Calgary product buried the one-timer to level the score with his 17th of the season.

SCORES! @ozzywiesblatt finishes off a great passing play with the man advantage!

Less than two minutes later, the ICE regained their lead with a power play of their own. Connor McClennon made a quick pass from behind the goal line out front to Pederson who one-timed it over Karki for his second of the night to make it 2-1.

About three minutes later, the Raiders tied it up again with another power-play marker. Wiesblatt fed Protas with a cross-ice pass. Protas received the pass with his skate, kicked it to his stick, and wired a shot past Jesse Makaj for his 21st goal of the season.

SCORES! The Viper strikes on the power play! @protas_21 buries the feed from Ozzy Wiesblatt!

Protas almost gave the Raiders the lead shortly after. On a rush into the ICE’s end, Moe hit Protas with a cross-ice pass, but Makaj slid over to rob the Washington Capitals prospect of a sure goal.

The Raiders took the lead 2:13 into the second period. While shorthanded, Vitelli got the puck out of the zone and kept working through the neutral. He was able to recover the puck, skate in on a shorthanded breakaway, and slide a puck through Makaj for his third goal of the season.

SCORES! @reecevitelli9 slides it home on a shorthanded breakaway!

Two minutes later, Watts doubled the Raiders’ lead. Moe worked hard on the forecheck to keep the puck in the ICE’s end. He got the puck over to Protas while Watts jumped off the bench to start a brief two-on-none rush. Protas faked the shot and dished to Watts, who put the puck into the empty net for his 18th of the season.

Vitelli tallied his second of the night to give the Raiders a 5-2 lead at the 9:18 mark of the second. After winning an offensive zone faceoff on the power play, Kaiden Guhle got the puck back to Landon Kosior at the point. Kosior put a shot on net that was deflected by Vitelli past Makaj for his fourth of the year.

SCORES! @reecevitelli9 with his second of the game, tipping home the point shot!

In the second half of the period, Karki came up big on two occasions for the Raiders. First, he denied ICE captain Peyton Krebs on a breakaway with a calm glove save. Then while the Raiders were on the power play, McClennon got in on the left wing and was stopped by Karki. The rebound squirted out to Pederson in the slot. Karki stayed back and got the paddle down as Pederson tried to slide it around the Sartell, MN product.

The ICE brought it back within two with 5:41 to play in the third period. Cole Muir picked the pocket of a Raiders defender, turned back towards goal, and snapped a shot from the slot that beat Karki to make it a 5-3 game.

It was as close as the ICE came on the evening. Late in the game, they pulled their goalie for the extra attacker during a power play. However, Jackson Leppard took a high sticking penalty late in the contest to end any chance of a comeback.

We’re back at it on Tuesday night at home against the Red Deer Rebels. Game time is 7 p.m.#GoRaidersGo #WPGvsPA pic.twitter.com/Zvl6wDHMt8

Karki finished the game with 25 saves to pick up his first win in his first start as a Raider. Makaj stopped 29 Raider shots in the loss.

The Raiders return home on Tuesday night to take on the Red Deer Rebels. Puck drop is 7 p.m. Tickets are available at the Raiders Office and online here.