Raiders Fall to ICE in Winnipeg 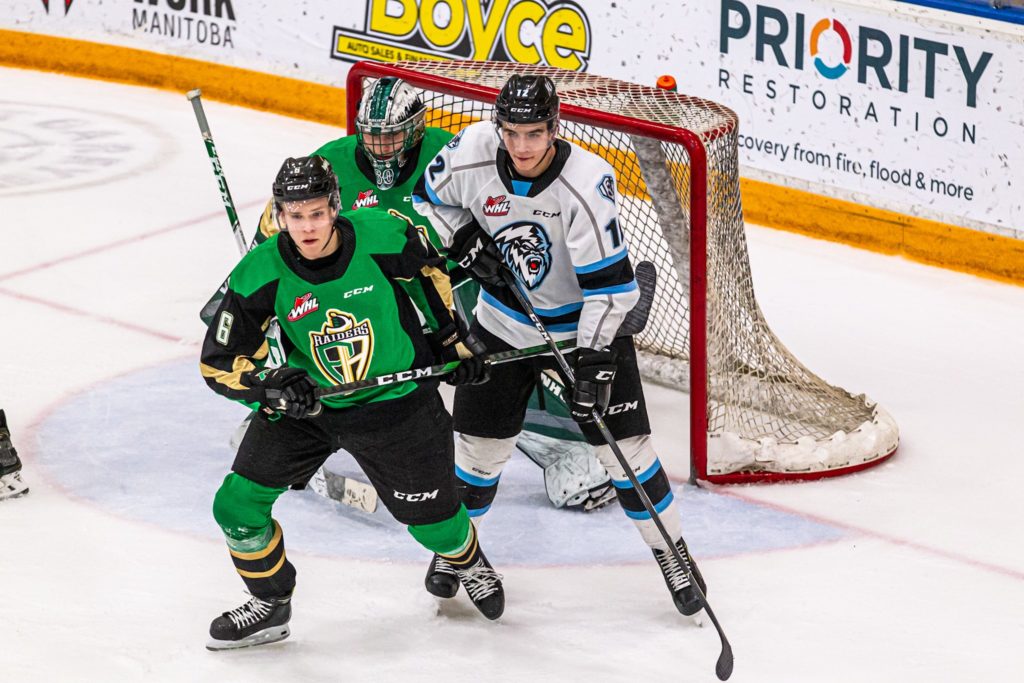 After falling behind 2-0 early in the contest, the Raiders were able to tie the game late in the second period. However, the ICE responded with three third-period goals to get the win.

Ilya Usau had a two-point night in the loss with a goal and an assist. Brayden Watts and Justin Nachbaur also scored.

Winnipeg opened the scoring 57 seconds into the contest. Connor McClennon picked off a pass at the Raiders blueline and carried the puck in. He looked to shoot, but the puck rolled off his stick. He was able to get the puck back and make a pass to Owen Pederson who put the puck into the empty side of the net to make it 1-0.

Eleven seconds later, the ICE doubled their lead. Peyton Krebs drove down on the right wing and put a pass across the goal mouth. Pederson was able to kick the puck in from outside the crease and past Boston Bilous for his second goal of the night.

The goal ended Bilous’ night after facing two shots in 1:08. He gave way to Keegan Karki, who was acquired by the Raiders from the Everett Silvertips late on Friday night.

Midway through the period, the Raiders thought they had got on the board. Liam Hughes stopped a shot, but put the rebound up in the air. Reece Vitelli crashed the goal and put the puck in, but did so with his hand. After a review, the no-goal call on the ice stood and the game went to the media timeout.

On the other side of the break, Usau brought the Raiders back within one. He put a pass toward the front of the net for Brayden Watts that deflected off a Winnipeg player’s stick and past Liam Hughes to make it a 2-1 game. Usau got credit for his 12th goal on the play.

SCORES! Ilya Usau’s centering pass goes off a stick and in!

The Raiders ran into some penalty trouble in the middle frame. After killing off the first two, the ICE struck on their third. Isaac Johnson made a cross-zone pass to McClennon who one-timed the pass past Karki to restore Winnipeg’s two-goal lead with 7:26 to play in the second.

Just 35 seconds later, the Raiders got back within one by forcing Hughes into a turnover behind his net. The Raiders worked the puck to Watts who snapped a shot that beat Hughes on the glove side for his 17th of the season, making it a 3-2 game.

SCORES! @brayden_watts29 with the quick response!

The Raiders levelled the score with 3:18 to play in the second. Aliaksei Protas dug the puck out and fed Spencer Moe, who was unable to get a shot off and carried the puck around the goal. He hit Kaiden Guhle with a pass at the point and the 2020 NHL Draft prospect put a shot on goal that got through traffic. Guhle originally got credit for the goal, but the puck deflected off of Nachbaur’s leg for the Cross Lake, MB product’s fifth goal of the season to send the game to the intermission at 3-3.

SCORES! Kaiden Guhle’s shot through traffic finds the back of the net!

The ICE regained their lead 3:47 into the third period. Winnipeg forced a turnover at the Raiders blueline. Jackson Leppard found Johnson after creating the turnover. Johnson snapped a shot from the slot that went off the crossbar and in to make it a 4-3 game.

Less than three minutes later, Winnipeg increased its lead to 5-3. Carson Lambos made a nice touch pass over to Johnson, who make a quick feed back over the Leppard, who was able to tap in the backdoor pass.

Leppard added another with 5:01 to play in the contest. He protected the puck from the corner, made a quick move to his forehand, and beat Karki from the slot to round out the scoring at 6-3.

Karki finished the game with 22 saves in relief of Bilous. Hughes stopped 25 Raiders’ shots to earn the win.

The Raiders and ICE square off again on Sunday evening at Wayne Fleming Arena. Game time is 6 p.m. Head to The Rock And Iron Sports Bar to watch the game, or listen on 900 CKBI with Trevor Redden.

The next Raiders’ home game is on Tuesday night when the Red Deer Rebels come to town. Puck drop is 7 p.m. Tickets are available at the Raiders Office and online here.