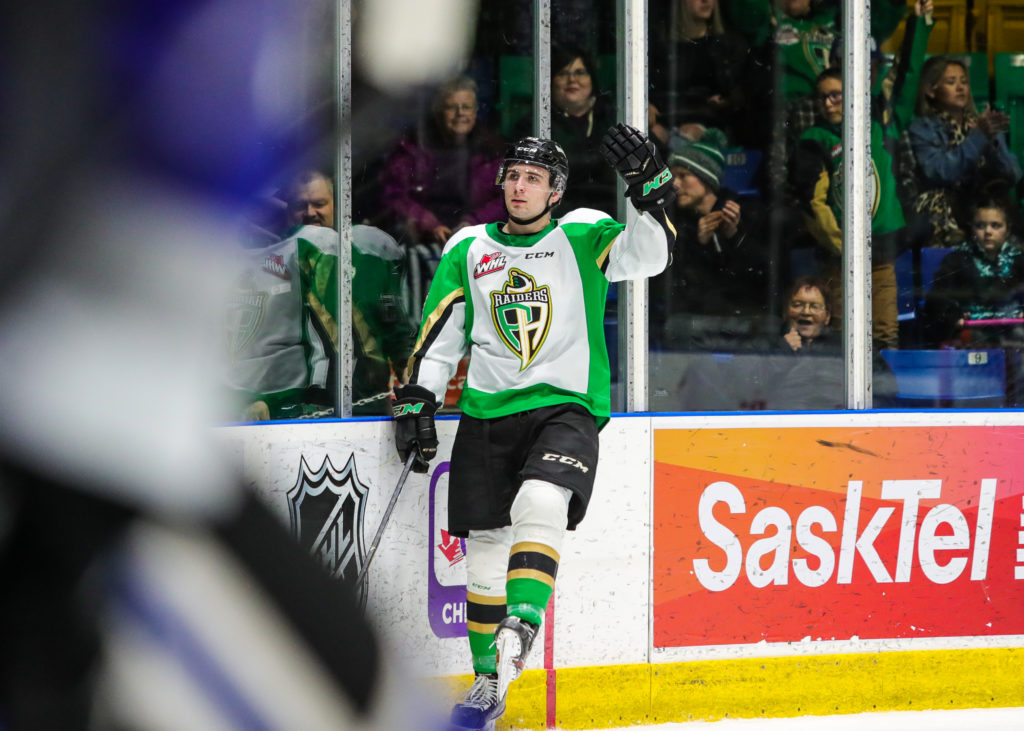 Prince Albert, SK – Kaiden Guhle and Ilya Usau had two-point nights while Max Paddock stopped all 17 shots faced as the Prince Albert Raiders (25-14-5-4) posted a 3-0 shutout over the Victoria Royals (25-18-4-0) at the Art Hauser Centre on Wednesday night.

It was Guhle’s fifth multi-point night and Usau’s ninth multi-point effort of the season. The Raiders extended their point streak to nine consecutive games.

After the two teams played a cautious first period, the chances started to come in the second period. Brayden Watts was left alone in front of the goal and picked up a rebound, but was unable to lift a backhander over Evanoff’s glove.

Watts had another great chance during the period. Landon Kosior skated into the slot then fed a cross-ice pass to the overager. Watts didn’t get all of the shot and sent it just outside of the post.

Late in the second, the Raiders opened the scoring. Kaiden Guhle got the puck and crept in from the left point. His shot got through an Usau screen in front and past Adam Evanoff to make it a 1-0 contest. It was Guhle’s ninth goal of the season.

Less than five minutes into the third, Usau doubled the Raiders’ lead. He got a pass from Ozzy Wiesblatt in front of the goal, moved to his left, outwaited Evanoff and put it into the open net for his 16th of the year, giving the Raiders a 2-0 advantage.

Usau and Wiesblatt nearly teamed up again to make it 3-0, but Evanoff made a highlight-reel save. On a breakaway, Usau skated across the crease, dropping a backhanded pass for the trailing Wiesblatt. The Calgary product one-timed the puck on goal, but Evanoff came back over and robbed him with his glove.

The Raiders wrapped up the game win an empty-net goal with 1:39 to go. Reece Vitelli carried the puck through the neutral zone and found the empty net as he stepped over the blueline to wrap up the scoring at 3-0 with his sixth goal of the year.

Paddock picked up his first shutout as a Raider and third overall this season with his 17 saves. It’s the fewest shots he has faced this season while playing a full game. Evanoff stopped 24 shots in a losing effort.

The Raiders close out their homestand on Friday night when the Lethbridge Hurricanes (29-11-2-5) visit the Art Hauser Centre. Puck drop is 7 p.m. Tickets are available at the Raiders Office and online here.