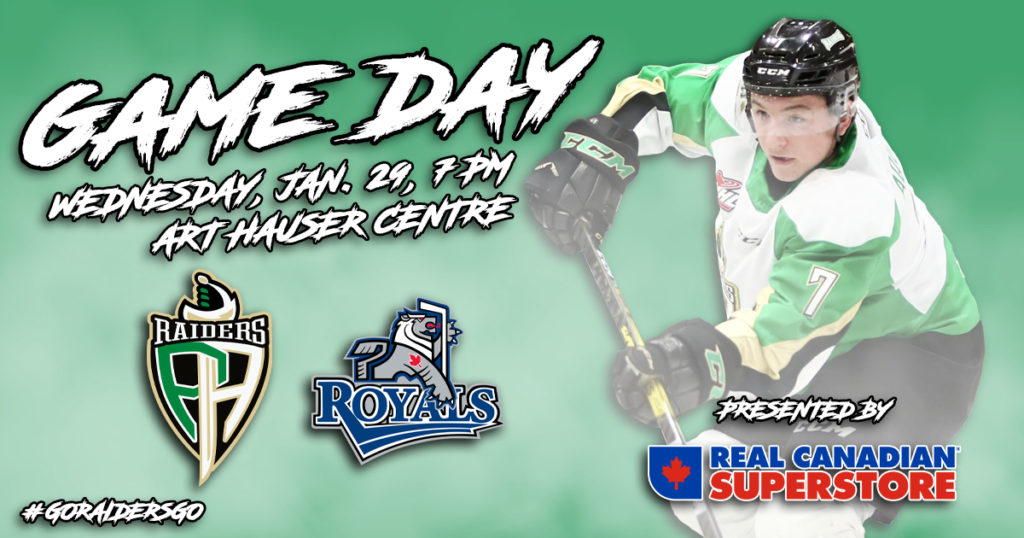 RAIDER REVIEW: The Raiders (24-14-5-4) wrap up their seasons series with the BC Division tonight when the Victoria Royals (25-17-4-0) visit the Art Hauser Centre. In their last outing on Saturday, the Raiders fell 4-3 in a shootout to the Medicine Hat Tigers. Ozzy Wiesblatt had a pair of assists, while Matthew Culling, Landon Kosior, and Kaiden Guhle were the goal scorers.

VS. VICTORIA: The Raiders have won back-to-back games against the Victoria Royals. Last year, the Raiders downed the Royals 4-1 in Victoria om Jan. 22, 2019. In the Royals’ last trip to Prince Albert, the Raiders edged Victoria 4-3 on Oct. 25, 2017.

CONSECUTIVE FOR CULLIING: Forward Matthew Culling has scored in back-to-back games for the first time as a member of the Raiders. All three of Culling’s goals with the Raiders have come since the WHL Trade Deadline on Jan. 10. It’s his first time scoring in consecutive games since Feb. 27 and March 1 with the Swift Current Broncos last year. His longest streak of his WHL career was a five-game stretch last season from. Dec. 14 to Dec. 30.

STREAKING: Rookie defenceman Landon Kosior continued to fill the net when he scored his third goal in as many games on Saturday. He is the second Raiders’ blueliner this season to have a three-game goal-scoring streak, joining Kaiden Guhle who had a four-game streak in November.

KEEPING PACE: With an assist on Saturday night against Medicine Hat, Ilya Usau has picked up a point in three of his last four games. Usau kept pace with the rookie scoring race as he currently sits in fourth with 35 points (15 goals, 30 assists).

DOUBLED UP: Ozzy Wiesblatt recorded his third two-assist performance of the season, marking a new career high. Wiesblatt is second in assists on the team with 32 helpers. He also has 19 goals to sit second in team scoring with 51  points.

NEXT UP: The Raiders close out their four-game homestand on Friday night against the Lethbridge Hurricanes. Puck drop is 7 p.m. Tickets are available at the Raiders Office and online here.