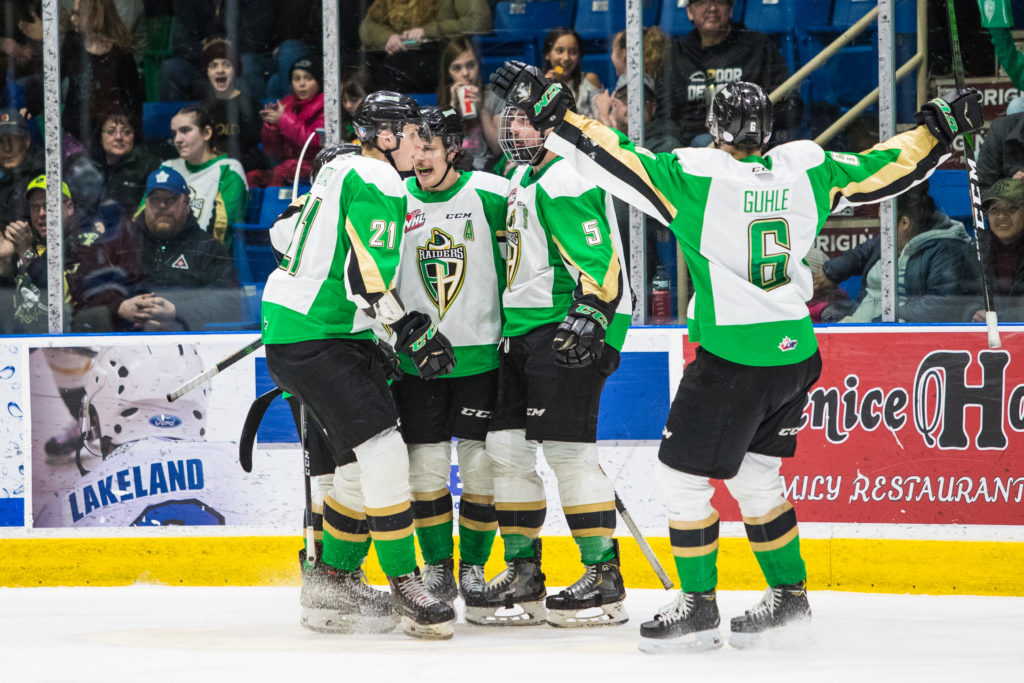 Prince Albert, SK – The Prince Albert Raiders close out their homestand this week before a trip to Swift Current to finish out the week.

Last weekend, the Raiders earned three out of a possible four points against the top two teams in the Central Division to extend their games with at least a point streak to eight.

Friday night saw the Raiders beat the Edmonton Oil Kings 3-2. Aliaksei Protas had two assists, while Matthew Culling, Landon Kosior, and Brayden Watts finding the back of the net.

On Saturday, the Raiders fell 4-3 in a shootout to the Medicine Hat Tigers. Ozzy Wiesblatt had two assists for the Raiders, while Culling, Kosior, and Kaiden Guhle scored the Raiders’ goals.

This week begins with a matchup against the Victoria Royals (25-17-3-0) as the season series with the B.C. Division comes to an end. The Raiders are 2-2 so far against teams from the B.C. Division, picking up wins over the Prince George Cougars and Vancouver Giants.

Last season, the Raiders downed the Royals 4-1 at the Save-On-Foods Memorial Arena in Victoria. Cole Fonstad, Max Martin, Sean Montgomery, and Justin Nachbaur were the goal scorers. In the last meeting at the Art Hauser Centre, the Raiders picked up a 4-3 win over the Royals on Oct. 25, 2017.

Wednesday’s game is presented by Real Canadian Superstore with someone in attendance winning 250,000 PC Optimum Points.

On Friday night, the Raiders complete their four-game homestand against the Lethbridge Hurricanes (29-11-2-5). The Raiders have won the first two meetings against the Hurricanes this year. They knocked off the Hurricanes 4-2 on Oct. 11 at the Art Hauser Centre, then won a 5-3 game at the ENMAX Centre on Nov. 22. Kaiden Guhle and Spencer Moe lead the season series with three points each.

Both Raiders home games begin at 7 p.m. Tickets are available at the Raiders Office and at raiderhockey.com.

The week concludes in Swift Current on Saturday night to take on the Broncos (10-31-1-3) at the Innovation Credit Union i-Plex. The Raiders swept a weekend home-and-home series on Nov. 29 and 30 this season by a combined 8-2 margin. Aliaksei Protas is the leading point producer in the season series with a goal and four assists.

Saturday’s game in Swift Current starts at 7 p.m. Head to The Rock And Iron Sports Bar to watch the game, or listen on 900 CKBI with Trevor Redden.