Raiders Fall In Shootout to Tigers 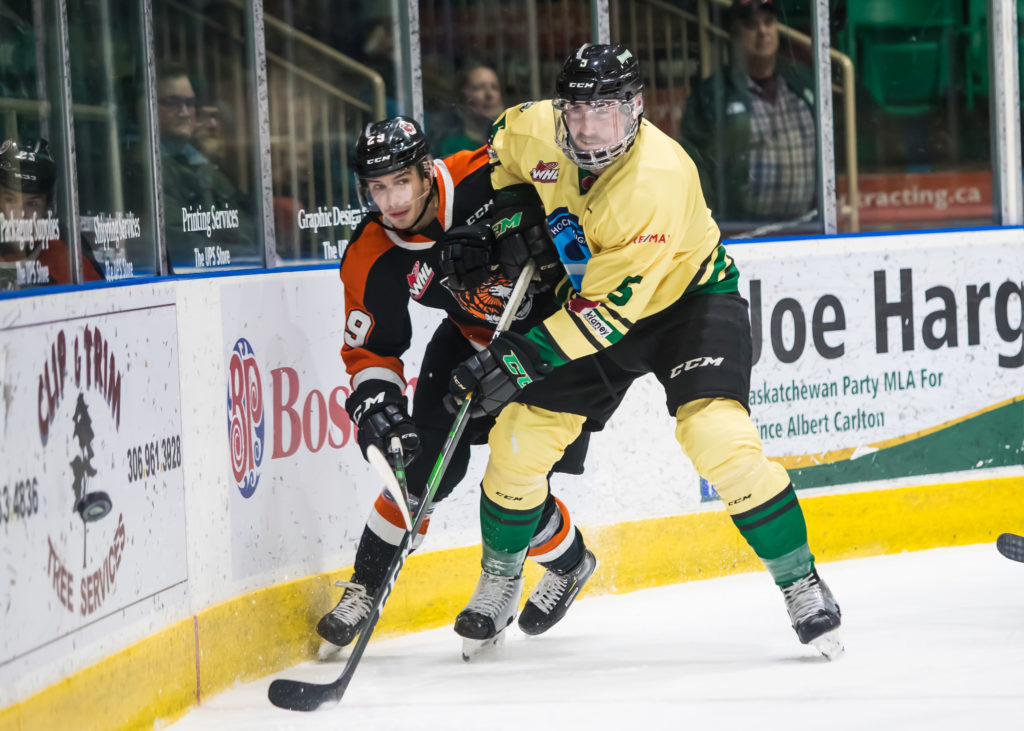 Matthew Culling had a goal and an assist for the Raiders, while Ozzy Wiesblatt chipped in a pair of assists in the loss. Kaiden Guhle and Landon Kosior also found the back of the net.

Despite the shootout loss, the Raiders extended their streak of games with at least a point to eight contests.

The Tigers got out to a quick start in the game. A puck skipped away from the stick of a Raiders defenceman and found Corson Hopwo. The Tigers forward fired a quick shot on goal. Max Paddock got a piece of it, but it wasn’t enough and found the back of the net 52 seconds into the game.

Two minutes later, the Raiders responded on a partial odd-man rush. Ilya Usau outwaited a sliding Tigers defenceman and laid a backhand pass for Culling, who deposited into the empty side of the net for his sixth goal of the season. Culling now has goals in consecutive contests for the first time as a Raider.

With 5:32 to play in the opening period, the Raiders took the lead with a power-play marker. Kosior got a puck at the point. He was given space, skated into the slot, and put a snap shot through Mads Søgaard to put the Raiders up 2-1. It extended Kosior’s goal-scoring streak to three games.

In the second, Paddock made some key saves to keep the Raiders ahead. His best of the frame came when Brett Kemp found space in front of the goal on a Medicine Hat power play. Kemp tried a quick deke to his backhand to fool the Raiders goaltender, but Paddock got his pad to the post to keep it out.

The Tigers tied the game with 2:37 to play in the middle frame. Daniel Baker’s slapshot from the point got through traffic in front of the goal to level the score at 2-2 after 40 minutes.

Medicine Hat took the lead 1:52 into third period. Cyle McNabb carried the puck into the zone on a two-on-one rush. He was able to outwait a Raiders defenceman and put a backhand pass into the path of Nick McCarry who jammed in the feed to put the Tigers up 3-2.

The Raiders tied it up with 6:34 to play in regulation. Guhle took a pass from Wiesblatt at the point. He faked to his right and cut around his man to the left, skated into the left faceoff circle and snapped a shot short-side past Søgaard to make it 3-3.

Guhle’s goal sent the game to overtime, where the two teams traded chances. Paddock stopped all three shots fired his way in the extra frame, while Søgaard stopped a pair of attempts by the Raiders.

In the shootout, James Hamblin struck first for the Tigers. Wiesblatt responded in the third round for the Raiders. Kemp ended the game for Medicine Hat when he beat Paddock with the final shot of the third round, wrapping the game up at 4-3.

The Raiders are off until Wednesday night when the Victoria Royals make their lone trip of the season to the Art Hauser Centre. Puck drop is 7 p.m. Tickets are available online here.