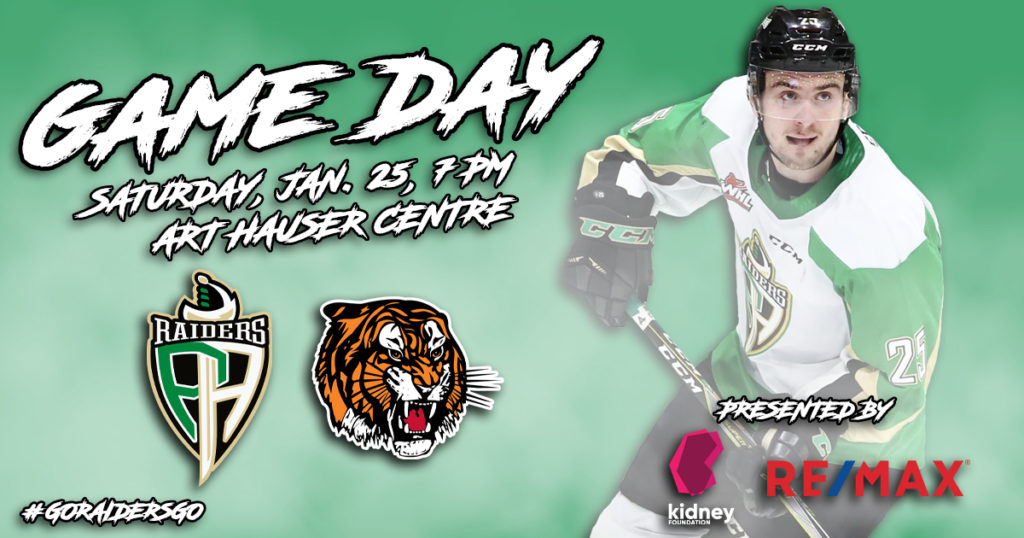 RAIDER REVIEW: The Raiders (24-14-5-3) welcome the Medicine Hat Tigers (29-14-1-1) on RE/MAX Presents WHL Suits Up to Promote Organ Donation Night. Last night, the Raiders downed the Oil Kings 3-2 at the Art Hauser Centre. Aliaksei Protas had a pair of assists in the win. Matthew Culling, Landon Kosior, and Brayden Watts were our goal scorers. Max Paddock made 30 saves for the win.

WHL SUITS UP: As part of RE/MAX Presents WHL Suits Up to Promote Organ Donation Night, fans will receive a scratch ticket when they enter the building for a chance to win one of 1,000 Hockey Night In Canada themed bobbleheads. Also, four of the special Hockey Night In Canada themed jerseys will be raffled off at tonight’s game. Fans can buy tickets for the draw. At the end of the second intermission, tickets will be drawn to select the winner of each of the four jerseys.

DOUBLE DIGITS: Aliaksei Protas picked up his 10th two-assist game of the season in Friday’s win over the Oil Kings. The Washington Capitals prospect has 35 assists on the season, which leads the team. His two points also increased his team-leading point total to 57 this season. The Belarusian forward is three points away from 100 in his WHL career.

BACK TO BACK: For the first time in his WHL career, Landon Kosior has recorded goals in back-to-back games after scoring on Friday night against Edmonton. The 2020 NHL Draft prospect from Regina has four goals and 14 assists  while playing in all 46 games this season.

STREAK SNAPPED: Ozzy Wiesblatt saw his six-game point streak come on an end on Friday night. During that span, the 2020 NHL Draft pick had three goals and five assists. Wiesblatt is second on the team in scoring with 49 points (19 goals, 30 assists).

STARTING STRONG: The Raiders continued their trend of starting the lead and keeping it. On Friday, the Raiders improved to 13-1-0-0 when leading after the first period.

NEXT UP: The Raiders continue their homestand on Wednesday night when the Victoria Royals make their only trip of the season to the Art Hauser Centre. Puck drop is 7 p.m. Tickets for the game are available at the Raiders Office and online here.