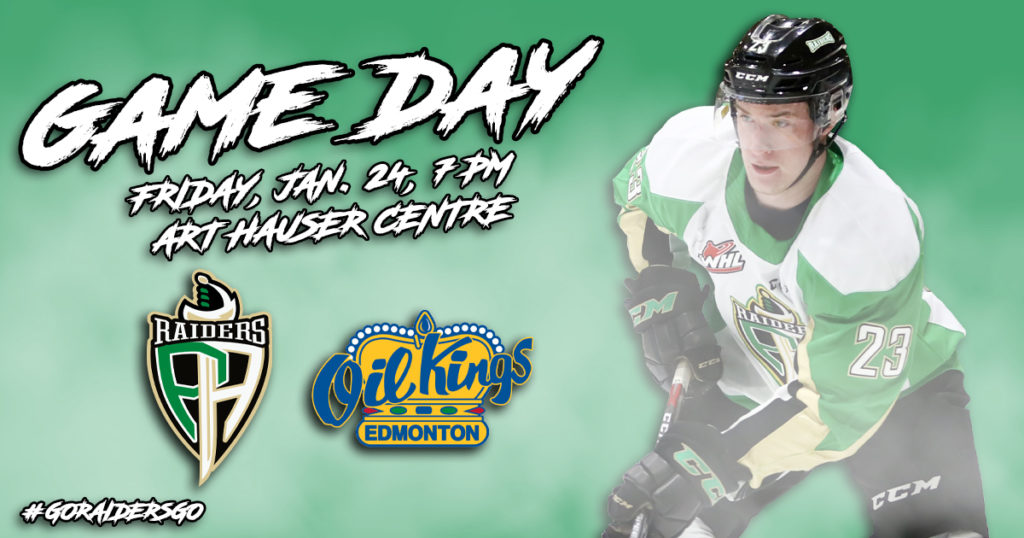 RAIDER REVIEW: The Raiders (23-14-5-3) close out their season series against the Edmonton Oil Kings (31-7-6-3) tonight at the Art Hauser Centre. In their last outing, the Raiders fell 4-3 in a shootout against the Rebels in Red Deer. Landon Kosior led the way for the Raiders with a goal and an assist. Ilya Usau and Eric Pearce also scored. Carter Serhyenko stopped 24 shots in the loss.

FIVE STRAIGHT: Saturday night marked the fifth-straight game that the Raiders needed to go beyond regulation to find a winner. It is the first time the Raiders have played five straight overtime games during the WHL’s “Internet Era,” which features information dating back to the 1996 WHL Playoffs. Over this streak of overtime games, the Raiders have posted a 2-0-1-2 record.

TWO FOR KOSIOR: Rookie Landon Kosior picked up his third two-point night of the year on Saturday in Red Deer. He also snapped a 30-game goalless skid with his second-period marker. His last goal was on October 26 in Spokane against the Chiefs. Kosior is second on the Raiders in scoring among defencemen with three goals and 14 assists.

BACK IN THE GOAL COLUMN: Eric Pearce found the back of the net for the first time on Saturday night since November 8 against the Brandon Wheat Kings, which was a span of 20 games. The Regina product has three goals and three assists in 40 games this season.

SPORTSMANLIKE: Aliaksei Protas was the last Raider not to take a penalty during the 2019-20 season. On Saturday night in Red Deer, the Washington Capitals prospect took his first minor penalty of the season. He is tied for the fewest penalty minutes among Raiders skaters with Spencer Moe, who also has just two penalty minutes.

NEXT UP: The Raiders host the Medicine Hat Tigers tomorrow night on WHL Suits Up to Promote Organ Donation Presented By RE/MAX Night. The Raiders will be wearing special Hockey Night In Canada themed jerseys that are being auctioned off for the Kidney Foundation. The auction closes tonight at 11 p.m. Click here to check out the auction. Puck drop is 7 p.m. Tickets are available at the Raiders Office and online here.