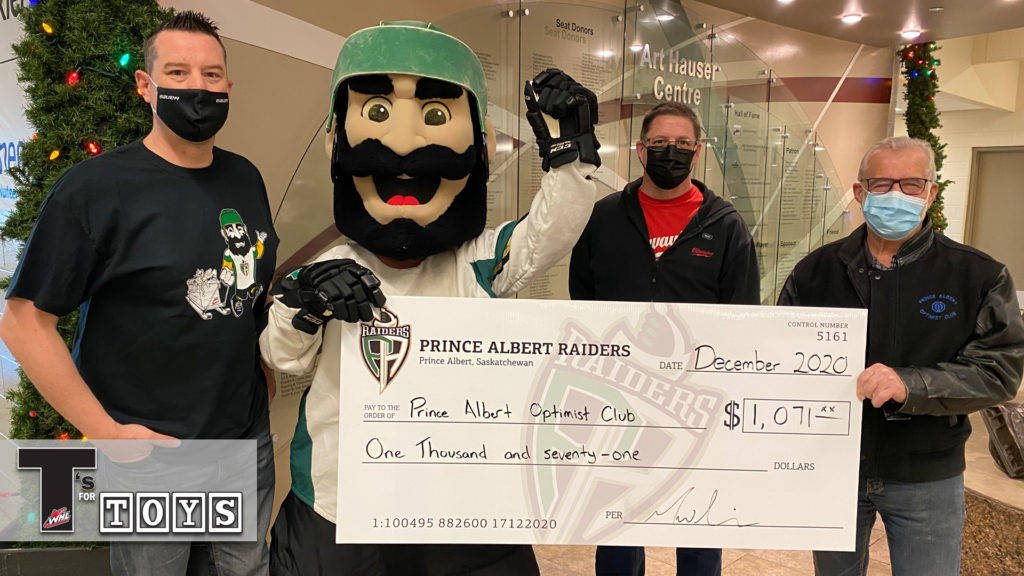 Prince Albert, SK –  Thanks to the generosity of Raiders fans, the Prince Albert Raiders were able to donate $1,071 to the Optimist Club of Prince Albert as part of the WHL T’s For Toys Campaign.

The WHL and its 22 member Clubs are proud to announce that over 800 children across WHL territory have been supported as a result of the WHL T’s For Toys Campaign.

In normal years, the Raiders partner with the Optimist Club of Prince Albert for Santa Anonymous Night, where fans are aksed to bring new, unwrapped toys for donation to kids in need. Through the Santa Anonymous program, an estimated 1,200 to 2,000 toys are collected and distributed annualy to Prince Albert and area.

“We were excited to find another way to continue our partnership with the Optimist Club to help kids have a happy holiday season in place of our usual game night,” said Raiders Business Manager Michael Scissons.

Santa Anonymous depot locations are accepting toys through the rest of the week, including inside the Johnny Bower Lobby at the Art Hauser Centre. For a full explanation of the Santa Anonymous program, click here.

The WHL T’s For Toys Campaign sought out the efforts of all 22 WHL Club Mascots, each of whom had their likeness depicted on one of 22 unique WHL Club T-shirts. This represented the first time all 22 WHL mascots joined forces to benefit children in their communities. From November 16 through December 14, collectible WHL Club Mascot T-shirts were sold, with $7.00 (CAD) from each T-shirt sold going directly to local charities to purchase toys for local children.

“On behalf of all 22 WHL member Clubs, we want to thank WHL fans everywhere who supported the WHL T’s For Toys Campaign,” commented WHL Commissioner Ron Robison. “Your display of generosity will help to ensure that children across the WHL territory will receive toys during the holiday season.”

Each WHL Club partnered with a local charity to benefit from the WHL T’s For Toys Campaign: