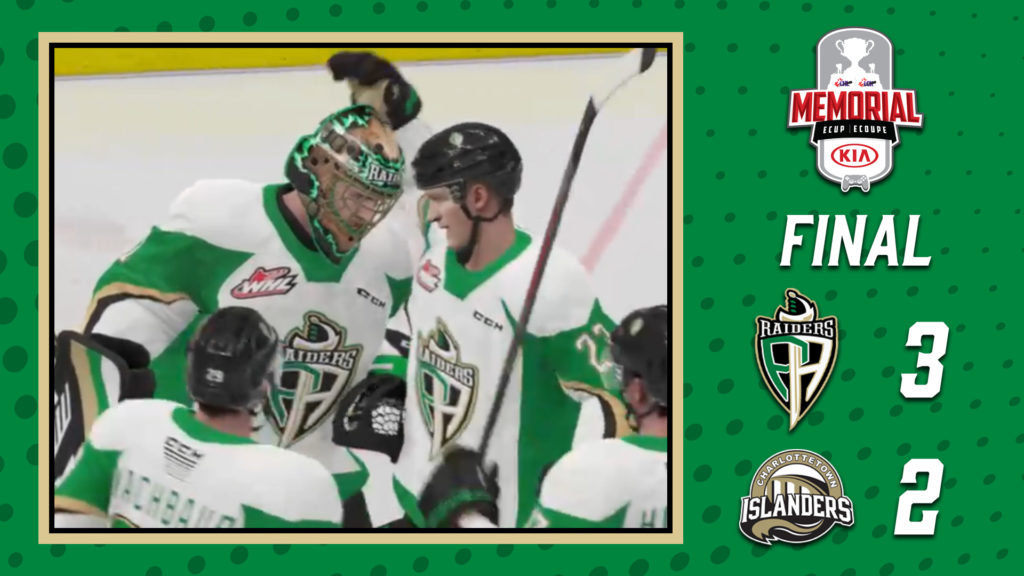 Zack Hayes guided the Prince Albert Raiders to a three-goal third period in a 3-2 win over the Charlottetown Islanders in Round 1 of the CHL Memorial eCup Presented By Kia.

The Islanders opened the scoring of a defensive contest late in the second period following a turnover deep in the Raiders’ end. Nikita Alexandrov pounced on the puck and set up Thomas Casey with a one-timer at the top of the crease in front of Max Paddock to give Charlottetown a 1-0 lead heading into the second intermission.

Off the faceoff to open the third period, the Raiders gained the zone. Kaiden Guhle found Ozzy Wiesblatt in the corner. The virtual version of the San Jose Sharks prospect connected on a cross-crease pass with Aliaksei Protas to make it a 1-1 contest.

Casey struck again for the Islanders roughly four virtual minutes later for his second of the contest. He let the Raiders defence skate by then wired a shot past Paddock to put Charlottetown ahead again.

Hayes wasted no time on the joysticks to tie the game again. Matthew Culling worked a give-and-go with Spencer Moe the Regina product’s avatar buried the one-timer to tie it up at 2-2.

Late in the third, Hayes controlled Wiesblatt to a highlight-reel goal. The virtual Wiesblatt toe-dragged around an Islander in the neutral zone, gained entry into the offensive zone, toe-dragged another defender and lifted a shot by Islanders goaltender Colten Ellis’s glove to give the Raiders their first lead of the game at 3-2.

With less than a minute to go, the virtual Paddock stood tall in the Raiders goal as Noah Laaouan was sprung on a breakaway. The defenceman deked to his forehand, but Paddock got his left pad to the post to deny the attempt and preserve the win. Here are the statistics from the contest: 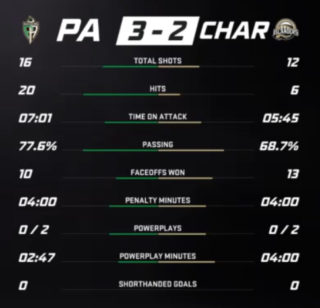 Zack Hayes will take on Gabriel Belley-Pelletier and the Baie-Comeau Drakkar in Round 2 of the CHL Memorial eCup Presented By Kia. Catch the game on the Raiders’ Twitch channel and on Facebook Live.