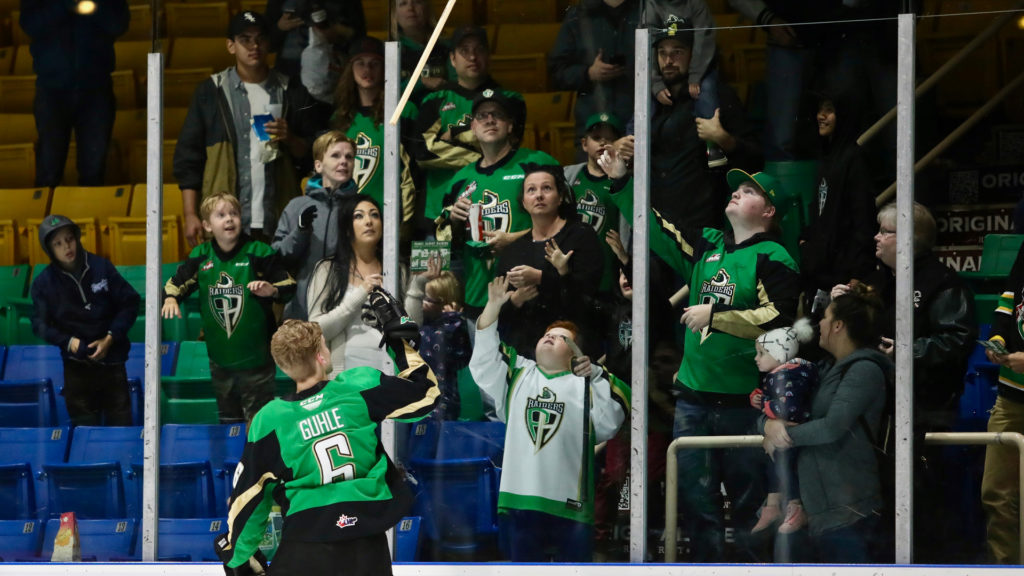 Growing up in Regina, Curtis Hunt had a front-row seat for the evolution of the Saskatchewan Roughriders.

Not only did Hunt witness a time when the Riders struggled just to survive, he was also around years later when the CFL club went from a doormat to a flagship franchise.
Hunt has been part of a similar turnaround as GM of the Prince Albert Raiders, who’ve emerged after some tough seasons to become one of the WHL’s most successful clubs.

Their transformation reinvigorated an already loyal fan base, much like what happened years ago with another prominent community-owned team.

“When I was 20-something, there were some long years (for the Riders),” recalled Hunt, 53. “But they’ve done a tremendous job of marketing that team and turning (each game) into an event. I’d like to think in a small town that’s exactly what it is for us. People wait for it on the calendar. At minus-40, the parking lot is full.”

Related Links
Harder: Stakes are high for WHL's small-market clubs during pandemic Harder: Swift Current Broncos won't throw in the towel Harder: Warriors expected to play vital role in Moose Jaw's COVID recovery
That dedication is one reason why Hunt is confident his team will weather the COVID-19 storm. He views hockey as part of the “lifeblood” in Prince Albert and believes the Raiders can play a role in the recovery of “Hockey Town North.”

“I’d like to think we are as important to the community as anything,” said Hunt, a former Raiders’ defenceman who helped them win the 1985 Memorial Cup. “(The team is) a source of entertainment and it can be a source of pride. There is some ownership from the fans — it’s our team, our town, those kind of things.”

The Raiders don’t have a deep-pocketed owner to keep them afloat during the pandemic, but they try to make up for it with a dedicated group of volunteers and supporters.Those allies — including corporate sponsors and ticket buyers — are essential during these uncertain times.

“People are prepared to give more and take less,” Hunt continued. “That’s a real advantage to some small-market teams, assuming we can ride this wave in these tough economic times.”

The Raiders are an important contributor to the local economy in P.A., but Hunt believes there is also a social and mental-health aspect to the equation.

When the team finally returns to the ice, he expects it to be a welcome distraction.

“That’s the biggest challenge right now,” he said. “I think it’s the balance that leaders have to consider for all of society.”

Hunt praised his staff members for their dedication and contributions during the pandemic.

Thanks in part to federal subsidy programs, the Raiders were able to avoid laying off any of their 11 full-time employees, although there have been some internal “sacrifices.”Hunt noted that “prudent fiscal management” is always critical for a small-market team like the Raiders, who have little margin for error at the best of times.

After ending a 33-year championship drought in 2019, Prince Albert was on its way to another division pennant last spring when the league shut down with two weekends left in the regular season.

Not only did the Raiders lose two critical home dates, they were deprived of another potentially lucrative playoff run.

So, instead of enjoying what could have been one of the most profitable seasons in franchise history, the team recorded a net loss of $331,895 (including about $167,000 for the CHL’s recent class-action settlement).

“It’s hard for us not to think: ‘Geez, we would have had ourselves on real good footing (in a normal year),’ ” Hunt noted. “There’s a buzz around town about a (new) building. Certainly we would have loved to try to have as much momentum as possible in the event that something like that could happen. Then, boom, it’s out of your control.”

The Raiders are positioned to ice another strong team in 2020-21, assuming the league is able to get an abbreviated season off the ground.

Either way, Hunt expressed “100-per-cent confidence” that his team will survive the COVID crisis.

“We’ll bare-bones it,” he added. “We’ll do whatever it takes internally without sacrificing the player experience. I just know our community is resilient. We have people committed to our success. We have tremendous support from our board. I just don’t see us doing anything but coming out of this a little bumped and bruised but (with our) head up and forging ahead.”