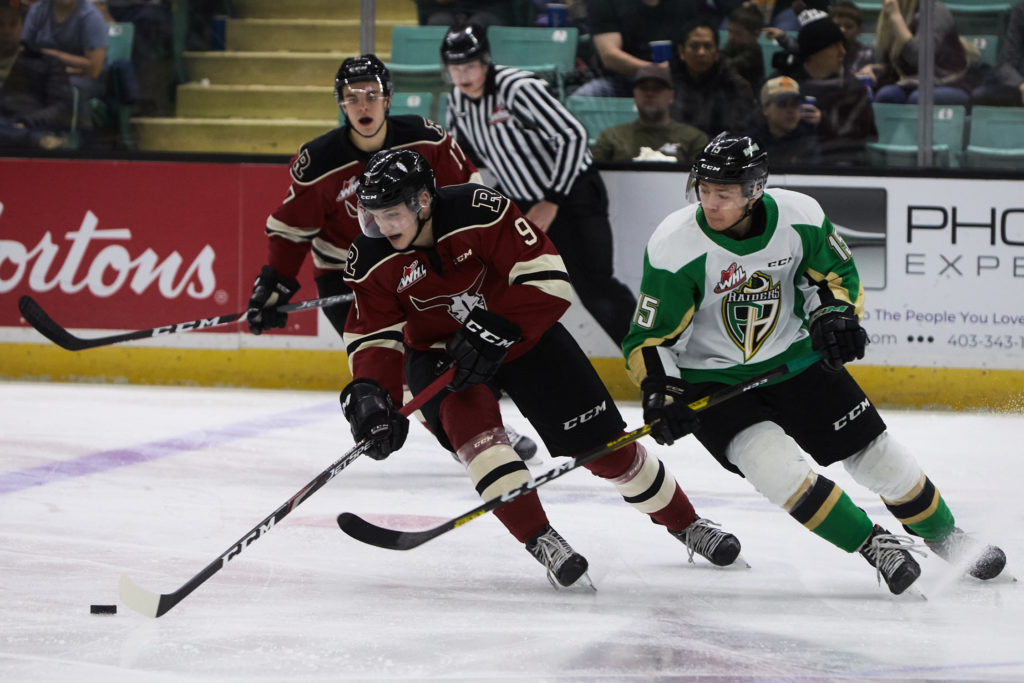 Red Deer, AB – The Prince Albert Raiders (23-14-5-3) picked up at least a point in their sixth consecutive contest, but fell 4-3 in a shootout to the Red Deer Rebels (15-23-2-3) at the Westerner Park Centrium on Saturday night.

Landon Kosior had a goal and an assist for the Raiders, while Eric Pearce and Ilya Usau scored for the Raiders in regulation. Ethan Anders kept the Raiders at bay during the game, stopping 31 of 34 shots and both attempts in the shootout.

Usau got the scoring started 5:07 into the opening frame with a highlight-reel goal. He took a drop pass from Ozzy Wiesblatt, faked a move to the outside and cut back inside to get around Mason Ward, then got back to his forehand to beat Anders for his 15th goal of the season.

SCORES! What a goal from Ilya Usau!

In the second, the Rebels levelled the score. Zak Smith fought off an Aliaksei Protas check in front of the net, spun, and slid the puck through Carter Serhyenko to make it a 1-1 game at the 8:50 mark.

The Raiders had a chance to regain their lead with about seven minutes to play in the second period. Matthew Culling saucered a pass that sent Wiesblatt in alone on Anders, but the Rebels goalie turned Wiesblatt aside with the blocker.

Kosior put the Raiders ahead with 37 seconds left in the second. As a four-on-four situation came to an end, Brayden Watts sent Kosior in on a breakaway. Kosior stumbled a little as he got the puck under control and fired a quick shot past Anders for his third goal of the year, to give the Raiders a 2-1 lead after 40 minutes.

SCORES! Out of the penalty box and into the goal column! @LandonKosior beats Anders with 37 seconds left in the second!

Early in the third, the Raiders picked up a two-goal lead. Reece Vitelli and Pearce got the puck to the front of the goal. Pearce found the loose puck at the top of the crease and beat Anders for his third of the season at the 1:27 mark.

SCORES! @EricPearce16 cleans up in front of the goal and pots the loose puck!

The Rebels got back within one just more than a minute later. Keaton Sorensen got the puck at the left side of the goal. Serhyenko slid over to that side, but Sorensen went around the goal and tucked in the wraparound to make it 3-2.

Red Deer tied it up with a power-play goal at the 5:54 mark of the third. Arshdeep Bains found Smith with a cross-ice pass as the Rebels entered the zone. Smith fired a shot past Serhyenko for his second of the night to level the score at 3-3.

Late in the third, Moe set up Watts with a pass in front of the goal. Watts went to stickhandle around Anders, but the Rebels goaltender pokechecked the puck away from the Raiders overage forward at the top of the crease.

In the overtime period, Kaiden Guhle had a great chance to end the game for the Raiders. He got his first shot on goal that was stopped by Anders, followed up the play, but a sliding Anders threw out his glove hand to rob the 2020 NHL Draft prospect.

In the waning moments of overtime, Serhyenko kept the Raiders alive. He stoned Chris Douglas on a two-on-one rush, then denied the next two shots from his stomach to send the game to a shootout.

In the shootout, Josh Tarzwell and Ben King scored while Wiesblatt and Usau were turned aside to give the Rebels the win.

Serhyenko made 24 saves in the shootout loss.

Both games start at 7 p.m. Tickets are available at the Raiders Office during business hours and online here.