Raiders Come Back For Overtime Win In Edmonton 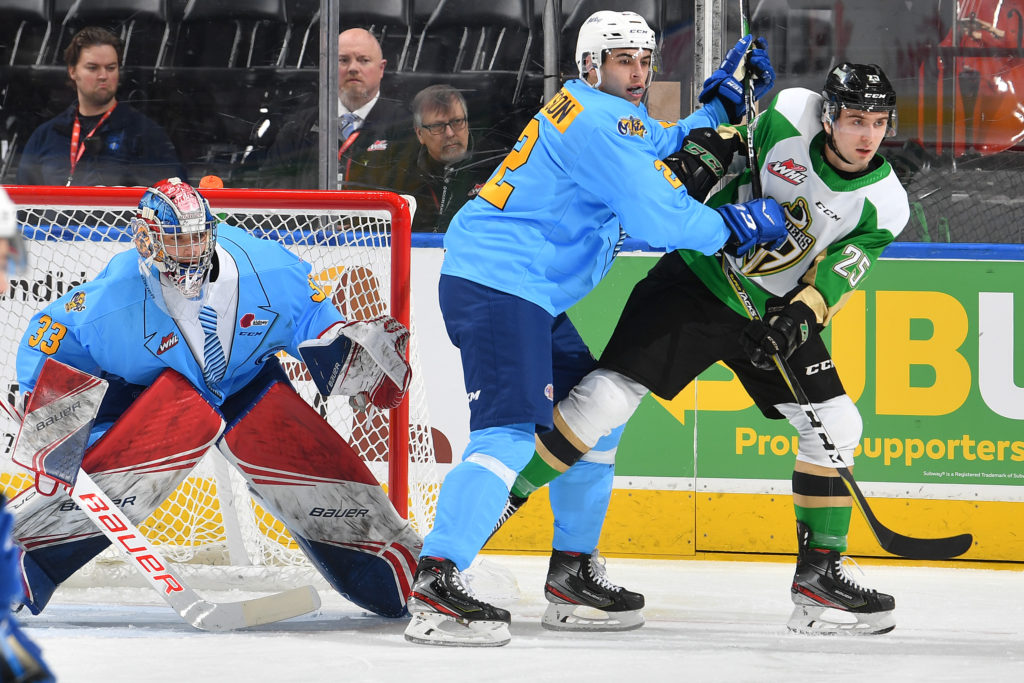 Edmonton, AB – Ozzy Wiesblatt tied the game in regulation and ended the game in overtime as the Prince Albert Raiders (23-14-5-2) picked up a 2-1 win over the Edmonton Oil Kings (29-7-6-3) at Rogers Place on Friday night.

Both of Wiesblatt’s goals came within 5:37 of each other in game time. It was his fourth two-goal effort of the season.

The Raiders have picked up at least a point in five consecutive games and have needed extra time in four straight contests.

Edmonton opened the scoring at the 8:36 mark of the opening period. Riley Sawchuk picked off a pass in the Raiders’ end. He tried a cross-ice pass that was partially blocked, but found the stick of Dylan Guenther. The Oil Kings’ rookie was alone in front and snapped a shot that beat Max Paddock to make it 1-0.

That goal held as the lone marker of the game until the third period. Paddock did his part to keep the Oil Kings at bay in the third. He made two quick stops on an Edmonton power play. Then, he turned aside two consecutive two-on-one rushes by the Oil Kings, one of which was stopped by his skate blade on Vladimir Alistrov.

It gave the Raiders the opportunity to tie the game on a power play late in the frame. Brayden Watts drew a penalty on a rush into the Edmonton end, forcing Jalen Luypen into holding him as Watts tried to split the defence.

On that power play, Ilya Usau took a shot from the point that hit a body in front of the goal. The puck ricocheted to Wiesblatt at the side of the net. Wiesblatt fired a shot on goal that went off Sebastian Cossa and in to tie the game with 4:30 to go. The Calgary, AB product’s 18th goal of the year sent the game to overtime.

SCORES! @ozzywiesblatt buries the rebound off a blocked shot to tie the game!

SCORES! @ozzywiesblatt does it again! He bangs home the rebound to give us the 2-1 win in overtime!

We're back at it tomorrow night in Red Deer against the Rebels. Game time is 8 p.m.#GoRaidersGo #EDMvsPA pic.twitter.com/pPzsZ7Habk

Paddock picked up his second win with the Raiders by stopping 27 of 28 shots faced en route to his third consecutive first-star performance. Cossa made 22 saves in the loss for the Oil Kings.

The Raiders head to Red Deer tomorrow night to battle the Rebels at the Westerner Park Centrium. Game time is 8 p.m. Head to The Rock And Iron Sports Bar to watch, or listen on 900 CKBI.

Next weekend, the Raiders return to the Art Hauser Centre for a pair of games against Central Division foes. On Friday, the Oil Kings come to town to wrap up the season series. Then on Saturday, the Medicine Hat Tigers visit Prince Albert. Puck drop for both games is 7 p.m. Tickets are available online here.