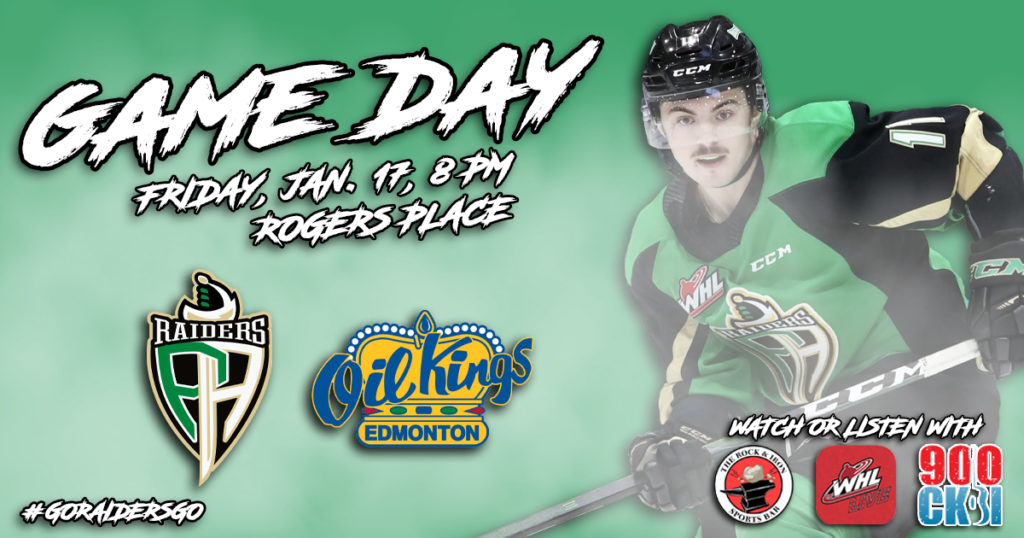 RAIDER REVIEW: The Raiders (22-14-5-2) begin a weekend trip to Alberta tonight against the Oil Kings (29-7-5-3) in Edmonton at Rogers Place. On Saturday, the Raiders fell 3-2 in a shootout to the Oil Kings at the Art Hauser Centre. Aliaksei Protas and Reece Vitelli scored in the game.  Jake Neighbours had a goal and the shootout winner for Edmonton. Max Paddock made 34 saves in the loss.

SHINING AT THE TOP PROSPECTS: Kaiden Guhle had a goal for Team White as his side skated to a 5-3 win over Ozzy Wiesblatt and Team Red at the 2020 Kubota CHL/NHL Top Prospects Game on Thursday night in Hamilton, ON.  Wiesblatt was held off the scoresheet for Team Red.

DOUBLING UP: With a goal and an assist on Saturday night, Aliaksei Protas picked up his team-leading 16th multi-point game of the season. The Washington Capitals prospect has nine two-point games, six three-point efforts, and a four-point night this season. Protas leads or holds a share of all of the Raiders’ offensive categories.

HEATING UP: Reece Vitelli is starting to find his offensive game. The Winnipeg, MB product has three goals and an assist over the past four games. Since joining the Raiders, Vitelli has five goals and 10 assists in 34 games.

HEY AQUILON: Defenceman Remy Aquilon played in his 100th career WHL game on Saturday against the Oil Kings. The blueliner from Kelowna, BC was acquired by the Raiders during the preseason from the Victoria Royals.

NEXT UP: The Raiders are off to Red Deer on Saturday night to take on the Rebels. Game time is 7 p.m. The Raiders return to the Art Hauser Centre on Friday, Jan. 24 to wrap up the season series with the Oil Kings. Puck drop is 7 p.m. Tickets are available online here.