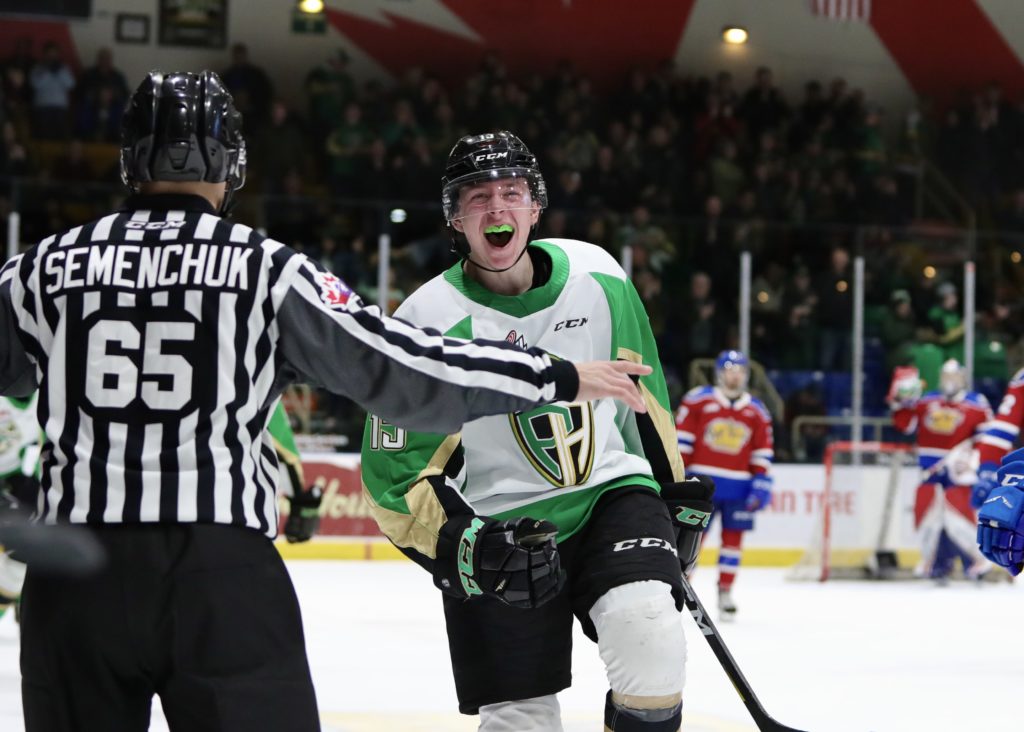 Last week, the Raiders picked up four out of a possible six points during their three-game homestand.

The week started with a 6-5 overtime loss to the Red Deer Rebels. Justin Nachbaur had a goal and two assists. Landon Kosior also added two assists in the overtime defeat.

On Friday, the Raiders downed the Prince George Cougars 2-1 in overtime. Ilya Usau scored on the third, while Matthew Culling fired home the game winner in the extra frame. Max Paddock, who was acquired on Thursday prior to the WHL Trade Deadline, got his first win in his first start with the club.

The Raiders wrapped up their week on Saturday night as they fell 3-2 in a shootout to the Edmonton Oil Kings. Aliaksei Protas had a goal and an assist in the loss, while Paddock had another impressive performance with 34 saves.

This week, the Raiders head to Alberta for the weekend beginning on Friday night with a rematch against the Oil Kings at Rogers Place in Edmonton. Following Saturday’s loss, the Raiders taken three of four points against the top team in the WHL this season.

On Saturday, the Raiders have another chance to avenge a loss from last week when they take on the Rebels in Red Deer. The Rebels have won two of the three meetings this season, but the road teams have prevailed in all of the games so far.

Both games begin at 8 p.m. CST. Head to The Rock And Iron Sports Bar to watch the games, or listen on 900 CKBI with Trevor Redden.

Also this week, Kaiden Guhle and Ozzy Wiesblatt head to Hamilton, ON to take part in the 2020 Kubota CHL/NHL Top Prospects Game on Thursday night. Wiesblatt is an alternate captain for Team Red, while Guhle will suit up for Team White. Catch the game on Sportsnet and Sportsnet 360 at 6 p.m. CST.

2020 #NHLDraft prospects are set to shine at the #CHLKTP on @Sportsnet this Thursday from Hamilton! #WhereGreatnessBegins pic.twitter.com/vRNmOTfiBF

The Raiders return to the Art Hauser Centre for a pair of weekend games against Central Division opponents on Friday, January 24 and Saturday, January 25. Friday night sees the Oil Kings return to Prince Albert as the teams wrap up their season series. On Saturday, the Raiders host the Medicine Hat Tigers.

Both home games start at 7 p.m. Tickets are available at the Raiders Office and online here.