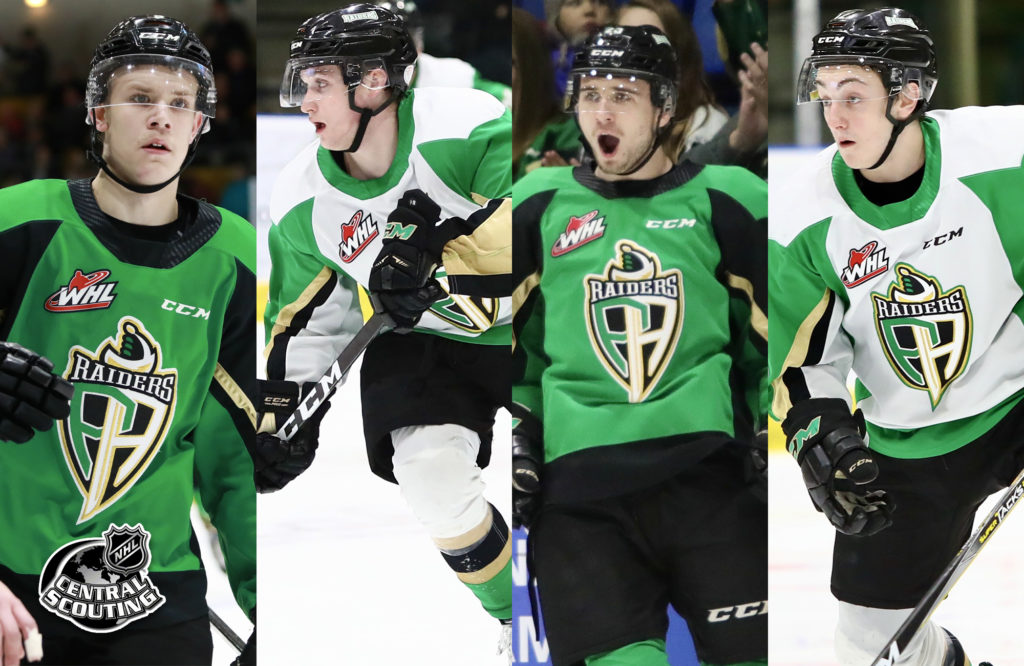 Guhle was the top-ranked Raider, listed at seventh by NHL Central Scouting. The 6’3, 184-lb blueliner leads the Raiders defence in scoring with seven goals and 18 assists while playing in all 43 games. He has also posted a plus-nine rating with 42 penalty minutes.

The Sherwood Park, AB product was the first overall selection in the 2017 WHL Bantam Draft. He was an ‘A’ ranked prospect on the Players to Watch list, which indicates a first-round candidate.

Wiesblatt is the second Raider in the top 15 of the rankings, coming in at 14. The Calgary, AB product has 17 goals and 29 assists in 43 games this year, which is good for second in team scoring.

The 5’10, 182-lb who forward has played centre and on the wing this season was a second round pick of the Raiders in the 2017 WHL Bantam Draft. Wiesblatt received a ‘B’ rating in the Players to Watch list, which indicates a second- or third-round candidate.

Guhle and Wiesblatt will be taking part 2020 Kubota CHL/NHL Top Prospects Game in Hamilton, ON on Thursday night. Catch the game on Sportsnet and Sportsnet 360 at 6 p.m. CST.

Usau, in his first season in the WHL, is fifth in team scoring with 14 goals and 18 assists in 43 games. The centreman worked his way up the rankings to be listed at 63rd.

Listed at 6’1 and 180 lbs, Usau was a player on the Raiders’ protected list and signed with the club prior to the season. He represented Belarus at the 2020 IIHF World Under-20 Hockey Championship Division 1A tournament in December. He was not ranked on the Players to Watch List in November.

Kosior was ranked 126th among North American skaters. In his rookie season this year, the 5’11 and 190-lb rearguard has a pair of goals and 13 assists in 43 games. He also is plus-13 with eight penalty minutes.

Hailing from Regina, Kosior signed with the Raiders during this year’s training camp. He was a ‘C’ rated prospect on November’s Players to Watch list, which indicates a fourth-, fifth-, or sixth-round draft candidate.

The Raiders are on the road this weekend, beginning on Friday night in Edmonton against the Oil Kings. Puck drop is 8 p.m. Catch the game at The Rock And Iron Sports Bar or listen on 900 CKBI with Trevor Redden.

The next Raiders’ home game is on Friday, January 24 against the Oil Kings. Puck drop is 7 p.m. Tickets are available at the Raiders Office and at online here.