Raiders Get Point in Shootout Loss to Oil Kings 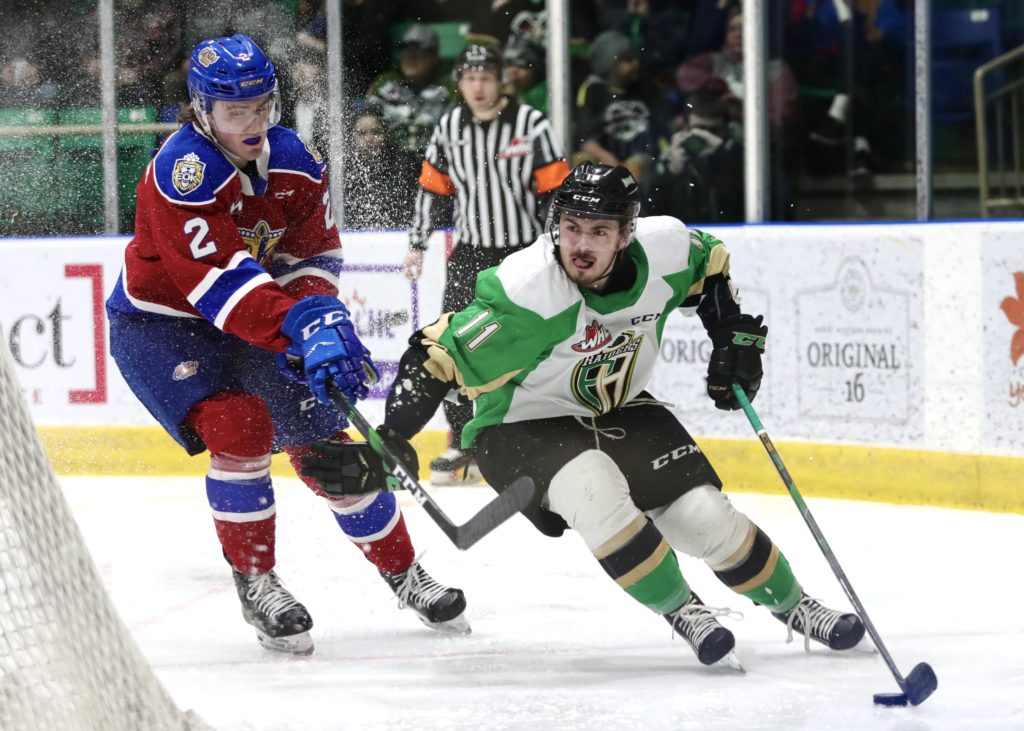 Reece Vitelli tied the game with 7.3 seconds in remaining to send the game to overtime. Aliaksei Protas netted the Raiders’ other goal.

Jake Neighbours tallied the winner in the skills competition, while Sebastian Cossa turned aside all three Raider shootout attempts.

The Oil Kings got the scoring started 3:22 into the contest. Brendan Kuny flipped a puck out of the zone that bounced to Vladimir Alistrov. The Belarusian import was in on a breakaway on Max Paddock and snapped a shot through the Raiders goaltender to make it a 1-0 games.

Three minutes later, Protas answered his countryman with a goal of his own. Ozzy Wiesblatt drove deep into the zone and made a centering pass for Brayden Watts. The overager was able to get his stick on it to touch it over to Protas who fired a quick shot through Cossa for his 22nd of the season.

The two teams traded shots in the second period, combining for 32 pucks on goal in the frame. Paddock turned aside all 19 Oil Kings shots in the frame. His best came at the side of the goal. He made the initial save off Josh Williams then reached back to pull the puck off the line after an Alistrov tried to pot the rebound.

Edmonton regained the lead 5:42 into the third period. Jalen Luypen sprung Neighbours on a shorthanded breakaway. He went forehand-backhand and tucked it around Paddock to put the Oil Kings up 2-1.

The Raiders pressed for the equalizer throughout the third and were rewarded with 7.3 seconds to play in regulation. From the left boards, Zack Hayes threw a puck towards the goal and Vitelli was able to get his skate on the puck to deflect the shot past Cossa to tie the game at 2-2.

The teams traded chances in the extra frame. Paddock made a big stop on a Neighbours partial breakaway to keep things tied. The Raiders enjoyed possession during the extra frame. Their best chance came from the stick of Protas after switching with Hayes at the faceoff circle. He tried going shortside on Cossa, but he was denied.

In the shootout, Protas, Ilya Usau, and Ozzy Wiesblatt were all turned away by Cossa. After Paddock stopped Dylan Guenther, Neighbours notched the lone goal of the shootout in the second round when he faked a shot then made a quick move to his forehand.

Paddock finished the game with 34 saves in regulation and overtime with another stop in the shootout. Cossa made 29 saves during his 65 minutes and made all three in the shootout.

The Raiders are off until Friday night when they travel to Edmonton for a rematch with the Oil Kings at Rogers Place. Game time is 8 p.m. Listen to the game on 900 CKBI, or head to The Rock And Iron Sports Bar to watch.

The next Raiders’ home game is on Friday, January 24 when the Oil Kings return to the Art Hauser Centre to wrap up the season series. Puck drop is 7 p.m. Tickets are available at the Raiders Office and online here.