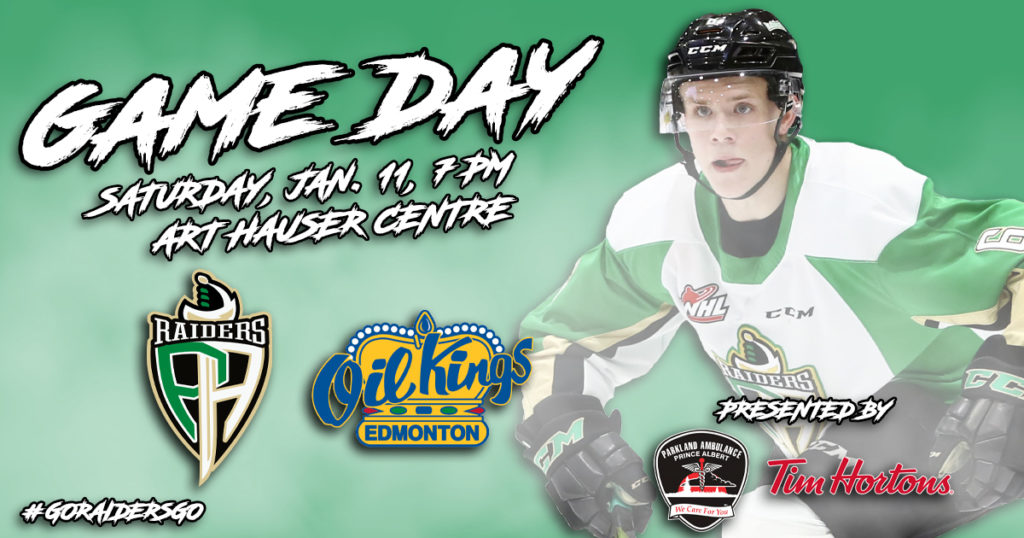 RAIDER REVIEW: The Raiders (22-14-5-1) take on the Edmonton Oil Kings (28-7-5-3) at the Art Hauser Centre for the first of three January games between the clubs. Last night against Prince George, the Raiders knocked off the Cougars 2-1 in overtime. Matthew Culling scored the winning goal in the extra frame. Ilya Usau also found the back of the net. Max Paddock stopped 20 shots in the win.

ON THE BOARD: Matthew Culling picked a great time to score his first goal as a Raider with his overtime marker on Friday night. It was Culling’s first game-winning goal of his career. The Regina product also snapped a 21-game goalless and pointless drought with his goal on Friday. Culling has four goals and an assist in 40 games with the Raiders and the Swift Current Broncos.

BETWEEN THE PIPES: Max Paddock earned his first win as a Raider in his debut on Friday night against the Cougars. It was the 45th win of the Brandon, MB product’s WHL career.

MILESTONE GAME: Zack Hayes dressed in his 250th career game on Friday night against the Cougars, marking the occasion with an assist on the game-winning goal. The captain has spent his entire WHL career with the Raiders, posting 11 goals, 58 assists and 304 penalty minutes with the team.

STREAK EXTENDED: Ilya Usau picked up a point in his fourth consecutive game goal on Friday, which is the Raiders’ longest active streak.

LEADERSHIP GROUP: Ozzy Wiesblatt was named an alternate captain for Team Red at the 2020 Kubota CHL/NHL Top Prospects Game in Hamilton on Thursday night. Wiesblatt is joined in the group by captain Quinton Byfield of the OHL’s Sudbury Wolves and alternate Dawson Mercer of the QMJHL’s Chicoutimi Sagueneens.

NEXT UP: The Raiders head to Edmonton on Friday to open a weekend in Alberta against the Oil Kings at Rogers Place. Game time is 8 p.m. The next Raiders’ home game is on Friday, Jan. 24 for another meeting with the Oil Kings. Puck drop is 7 p.m. Tickets for the game on Jan. 24 are available at the Raiders Office and online here.