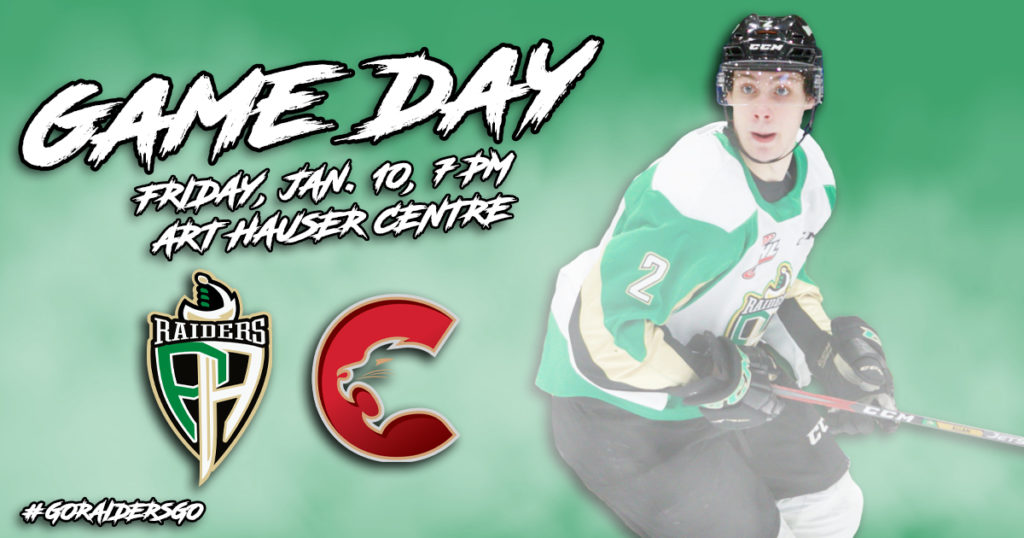 RAIDER REVIEW: The Raiders (21-14-5-1) take on the Prince George Cougars (10-22-2-4) tonight at the Art Hauser Centre. On Tuesday, the Raiders fell 6-5 in overtime to the visiting Red Deer Rebels. Justin Nachbaur picked up a goal and two assists in the game. Landon Kosior added a pair of helpers. Evan Herman, Jeremy Masella, Spencer Moe, and Ilya Usau also scored for the Raiders.

VS. PRINCE GEORGE: The Raiders have won their last two games against the Prince George Cougars, both by 6-2 scores. In last year’s win at the CN Centre, Sean Montgomery had a goal and an assist while Sergei Sapego chipped in two assists.

DIESEL POWERED: Jeremy Masella scored his third goal of the season on Tuesday night against Red Deer. The Phoenix, AZ product also scored the first goal by a Raiders defenceman in 10 games, which was a Kaiden Guhle marker on Dec. 11 against the Medicine Hat Tigers.

NACHBAUR’S NIGHT: Justin Nachbaur recorded the third three-point night of his career on Tuesday with a goal and two assists. His previous two came during the 2017-18 season, which was his rookie year in the league. The Cross Lake, MB product has goals in two of his last three games after snapping a span of seven games without a goal.

TWO HELPINGS: Landon Kosior picked up the second two-assist night of his rookie season on Tuesday. His previous two-point night was also against Red Deer on Nov. 20. Kosior is tied for fourth among rookie defencemen with 15 points.

NEXT UP: The Raiders wrap up their three-game homestand tomorrow night against the Edmonton Oil Kings on the third annual Sock Hop Night Presented By Parkland Ambulance. Fans are asked to bring new socks to throw on the ice during the second intermission for a chance to win a new TV. Tickets are available online here and at the Raiders Office.