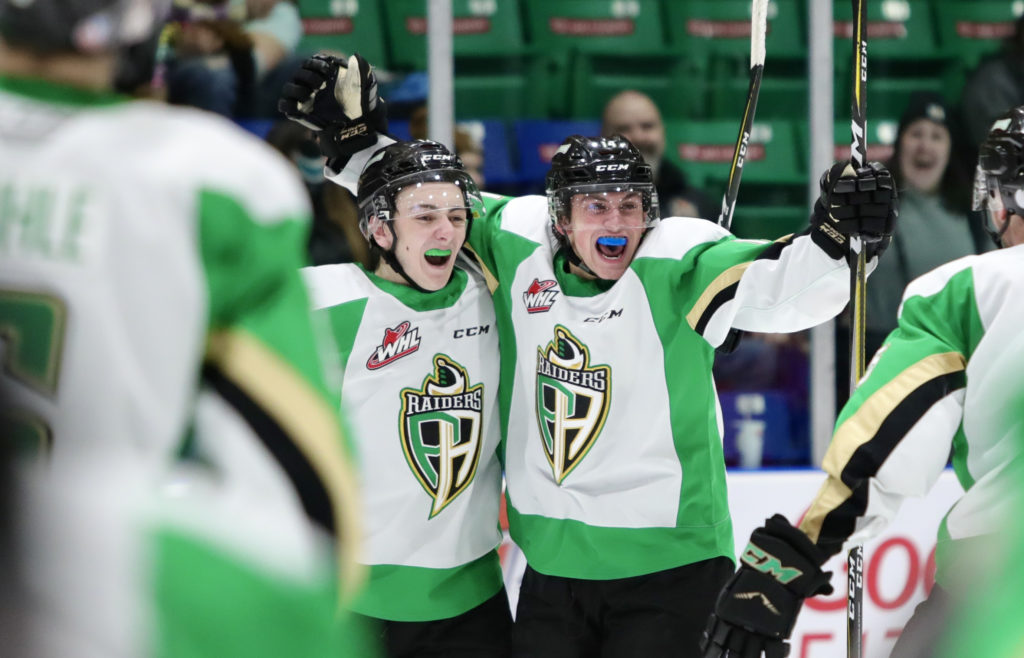 Prince Albert, SK – Matthew Culling scored the overtime winner and Max Paddock was the first star as the Prince Albert Raiders (22-14-5-1) picked up a 2-1 win over the Prince George Cougars (10-22-3-4) at the Art Hauser Centre on Friday night.

Culling’s goal was his first point as a Raider after being acquired from the Swift Current Broncos after the holiday break. It also stopped a 21-game goalless skid for the Regina product.

Paddock stopped 20 of 21 shots faced in the contest for his first win as a Raider. He also picked up back-to-back wins against the Cougars as he last game as a member of the Pats came against Prince George.

Ilya Usau got the scoring started 13 seconds into the final frame. The Raiders’ forecheckers forced a turnover deep in the Cougars’ end. Ozzy Wiesblatt found Ilya Usau at the top of the right faceoff circle. Usau wired a shot off the far post and in past Gauthier to give the Raiders a 1-0 lead. It was Usau’s 14th goal of the year, extending his point streak to four games.

Two minutes later, the Cougars tied it up with a power-play goal. Jack Sander’s shot from the point was deflected past Max Paddock from the top of the crease to make it a 1-1 game.

The Raiders forced Gauthier to make a number of great saves in the third period. One of their better chances came when Usau skated the puck into the zone, got past the defenceman, cut across the goal mouth, but wasn’t able to tuck it in past Gauthier.

For the second straight game, the Raiders went to overtime at home. During the extra frame, the Raiders were given a power play. Right off the faceoff, Aliaksei Protas set up Kaiden Guhle with a cross-zone one-timer, but Gauthier slid over to make the save.

Shortly after, Evan Herman was able to come in from the right side and fire a shot on goal that was gloved down by Gauthier.

Culling put the game away at the 3:34 mark of the extra frame. Zack Hayes carried the puck into the zone and had his shot blocked. Reece Vitelli poked the puck free from the defender who picked up the rebound and it found Culling. The Regina product wired a shot past Gauthier from the inside hashmarks for his fourth goal overall of the season to give the Raiders the win.

Gauthier kept the Cougars in the game with 38 saves in a losing effort.

The Raiders are back at home on Saturday night as they host the Edmonton Oil Kings on for the third annual Sock Hop Presented By Parkland Ambulance. Fans are asked to bring new pairs of socks to the game for donation to Parkland Ambulance. During the second intermission, they can throw the socks on the ice for a chance to win a new TV.

Puck drop is 7 p.m. Tickets are available online here and the Raiders Office.