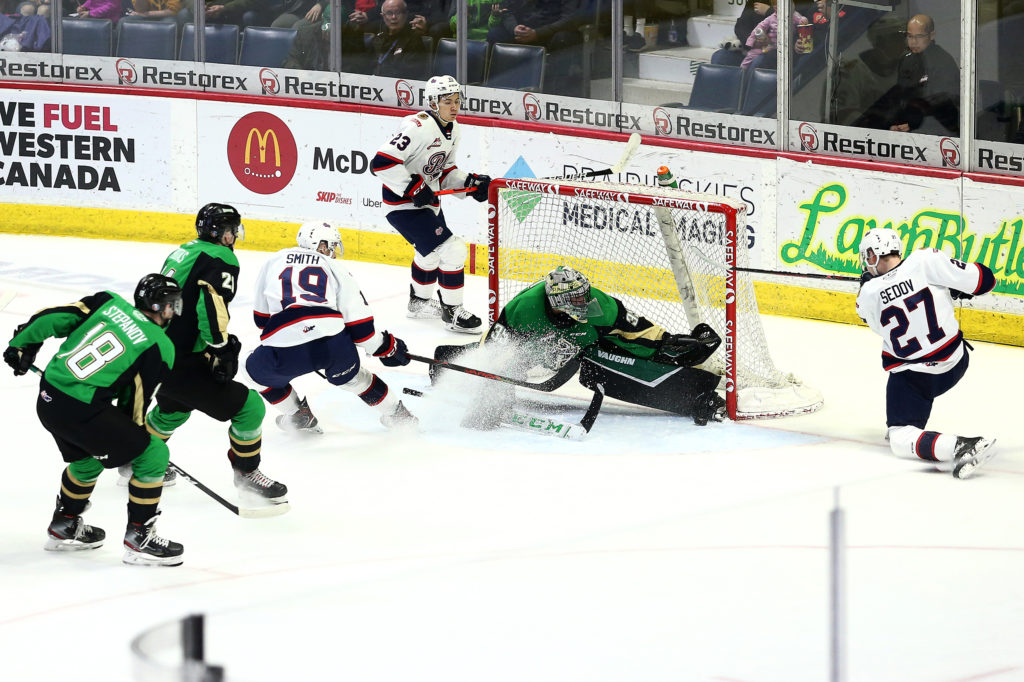 Robbie Holmes scored the game-winning goal 13 seconds into the extra frame for the Pats. Ozzy Wiesblatt scored the Raiders’ lone goal of the game late in the second period.

The first period was highlighted by penalties that took over the opening 10 minutes of the contest. The Raiders had three opportunities with the man-advantage and some five-on-three time, while the Pats went to the power play twice with some overlap. However, neither team was able to convert on their chances.

Justin Nachbaur had the best chance of the opening period with about six minutes remaining. He blocked a Pats shot near the point to spring himself on a breakaway. Nachbaur’s initial shot and rebound was stopped on a breakaway by Max Paddock. The puck came to Daniil Stepanov alone in front, but he sent his attempt over the goal with Paddock out of position.

Aliaksei Protas had a chance to get his side on the board early in the second. He took a pass from behind the Pats’ net and walked in front of goal, but Paddock kicked away his attempt on goal.

The Pats opened the scoring late in the middle frame. Logan Nijhoff was able to keep the puck in at the Raiders blueline and Riley Krane slipped behind the defence. Nijhoff found Krane, who outwaited Boston Bilous and tucked the puck into the net to give the Pats a 1-0 lead with 3:22 to play in the middle frame.

The Raiders were able to tie the game before the end of the period. Spencer Moe took the puck around the goal and hit Wiesblatt with a pass in front as he was being cross-checked by Tyson Feist. Wiesblatt turned and slid a shot through Paddock’s five-hole for his 16th goal of the season – a new career high – to make it a 1-1 game after 40 minutes.

SCORES! @ozzywiesblatt slips one through Paddock to tie it up!

In the third, the Raiders kept the momentum from the late goal into the third period. They put 13 shots on goal in the final frame, but were unable to solve Paddock for a second time.

The game headed to overtime, giving the Raiders their first point in the standings since a win on Dec. 13 against the Winnipeg ICE. Thirteen seconds into the extra period, Krane slid a pass to Holmes who got behind the defence off the opening faceoff. Holmes made a quick move to his backhand and beat Bilous to end the game and give the Pats the 2-1 win.

Bilous finished the game with 16 saves in the Raiders’ loss. Paddock stopped 29 shots for Regina in the win.

The Raiders continue their New Year’s road trip on Friday night in Brandon against the Wheat Kings (17-17-1-2) at Westoba Place. Game time is 7:30 p.m.

The next Raiders’ home game is on Tuesday night when the Red Deer Rebels (13-19-0-3) visit the Art Hauser Centre. Puck drop is 7:00 p.m. Tickets are available at the Raiders Office and online here. Discounted tickets for the Lake Country Co-op Section are also available at the Marketplace in Cornerstone.