Guhle, Wiesblatt Selected in First Round of 2020 NHL Draft 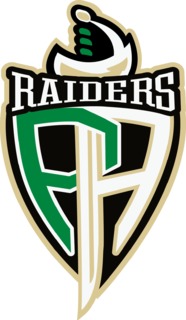 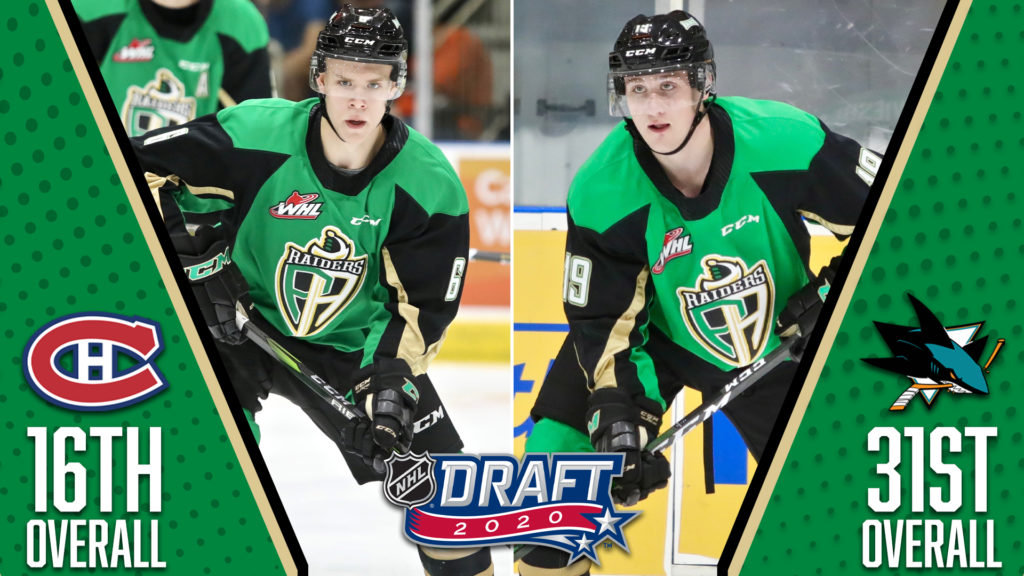 Prince Albert, SK – Kaiden Guhle and Ozzy Wiesblatt heard their names called on the first night of the NHL Draft.

On Tuesday night, Kaiden Guhle and Ozzy Wiesblatt were selected in the first round of the NHL Draft. Midway through the evening, Guhle was selected 16th overall by the Montreal Canadiens. On the final pick of the night, the San Jose Sharks drafted Wiesblatt with the 31st selection. 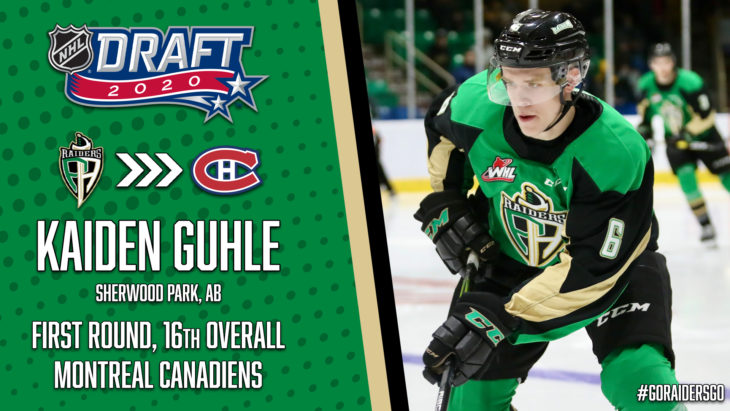 “It was awesome,” said Guhle on the Montreal Canadiens’ Zoom meeting of being drafted. “I know there’s been a lot of players to come out of the Western league that have been a part of that team.”

Montreal has drafted four Raiders in the team’s history prior to Guhle, most recently Cole Fonstad in 2018. The Canadiens also selected Kyle Chipchura 18th overall in the 2004 NHL Draft.

With the 16th-overall pick, the Montreal Canadiens are proud to select: Kaiden Guhle!#GoHabsGo | @RONAinc pic.twitter.com/rQQsYHdNIl

Guhle played more minutes and increased his offensive production in his sophomore season in the WHL. He set new career highs in all offensive categories, scoring 11 goals and adding 29 assists in 64 games. Five of his goals were on the power play and three were the game-winning goal.

Related Links
Kaiden Guhle Highlight Reel Ozzy Wiesblatt Highlight Reel
For his play this season, Guhle was the co-recipient of the Jim Neilson Award as the Raiders’ Most Valuable Defenceman Presented By North Star Signs. He was also the 2019-20 Third Star in the Three Stars Award Presented By Redhead Equipment.

Guhle said he believes his game will translate well to the NHL.

“Nowadays you need to be able to skate to play, and I think that’s my biggest attribute. If I ever get to the NHL, my skating and my play will work well with the modern NHL.” 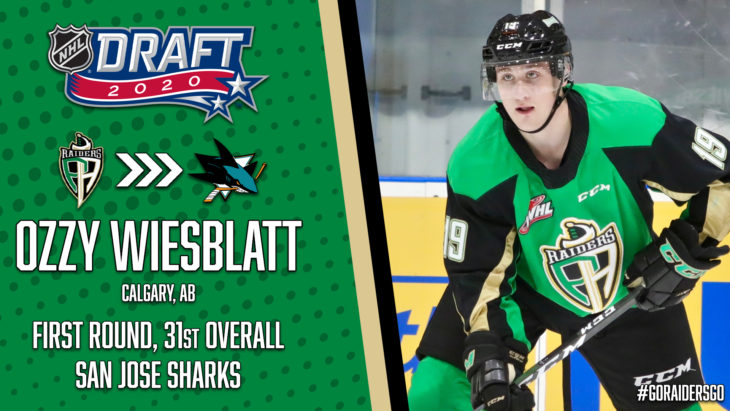 Wiesblatt is only the second Raider to be drafted by the Sharks. Cam Severson was picked by San Jose in 1998.

“I had a couple conversations with them,” Wiesblatt said on the San Jose Sharks’ Zoom meeting. “Right of the bat, they sort of felt like family. I’ve been lucky enough already. I can’t wait to meet everybody.”

Along with Sharks Director of Scouting Doug Wilson Jr. signing Wiesblatt’s name in ASL, four members of the Sharks – Brent Burns, Logan Couture, Erik Karlsson, and Kevin Labanc – joined the media call to congratulate the newest member of the organization.

“I can tell the Sharks organization is a family,” Wiesblatt said. “I’m ecstatic to be a part of it.”

He took a leap in his offensive game in his second season in the WHL. He finished second on the team in assists (45) and points (70), while also scoring the third-most goals (25) in 64 games last season. Ten of his goals came on the power play, while he also recorded five game-winning goals.

For his season, Wiesblatt was the Raiders’ First Star for the Three Stars Award Presented By Redhead Equipment.

Wiesblatt was also a point producer during the Raiders’ run to claiming the 2019 Ed Chynoweth Cup as a rookie in the WHL. He had five goals and five assists in 23 games, including one game-winning goal.

He joins another member of the WHL Championship team in the organization – Noah Gregor.

“We kind of clicked right away and ended up being linemates for the majority of the year,” Wiesblatt said of Gregor. “It’s really special and I can’t wait see some familiar faces.”

Guhle and Wiesblatt were both part of the Raiders’ WHL Championship team in 2019. Both players dressed in all 23 games. Guhle registered three assists, while Wiesblatt had five goals and five assists.

They were both also on Canada’s team at the 2019 Hlinka Gretzky Cup. Guhle, who served as an alternate captain, picked up an assist in five games. Wiesblatt played in all five games.