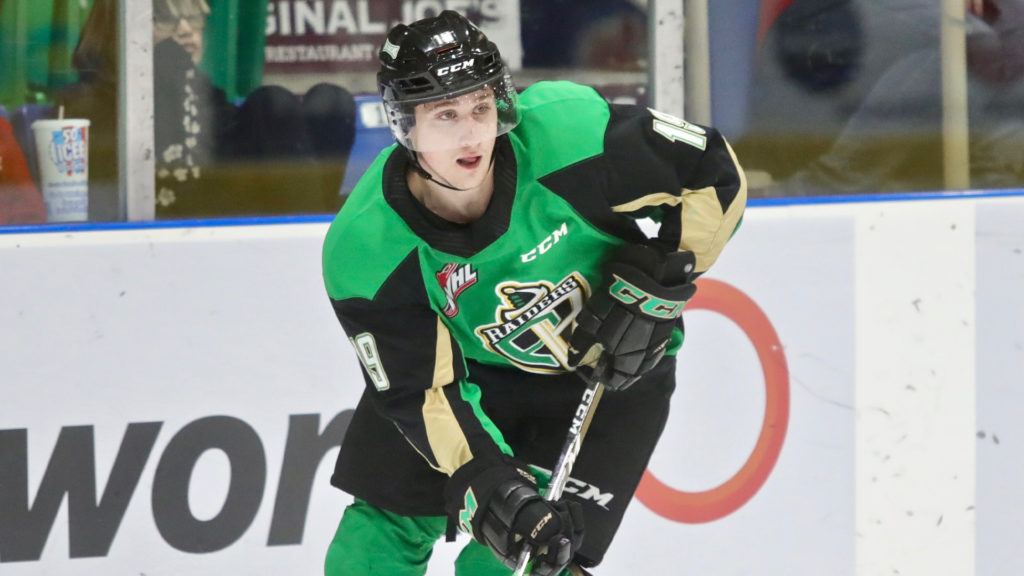 Ozzy Wiesblatt considers himself pretty lucky in these uncertain times.

While many people are trying to find ways to keep busy during the COVID-19 pandemic, the Prince Albert Raiders forward has been fairly active with his family since heading back home to Calgary in March.

“With three brothers (Ocean, Orca and Oasiz) and a sister (Oceania), we’re pretty much doing something together every single day,” Wiesblatt said. “We’re constantly playing sports outside or finding new things to do, such as hiking.

“We’ve all grown up playing baseball, basketball and football, so we’re a pretty athletic family. It gets pretty competitive when we go against one another, especially between Ocean, Orca, Oasiz and I, but it’s all been good.”

Related Links
Prince Albert Daily Herald 2020 NHL Draft
In addition to that, Wiesblatt has also changed his off-ice training methods to make sure that he’s in tip-top shape when the 2020-21 Western Hockey League gets underway.

“I’ve taken a lot of steps in improving my nutrition and looking after my body properly,” Wiesblatt.

“Whether it’s working out, eating right, and getting the proper amount of sleep, those are the things that are going to help me in taking the step in my career.”

The next major event in the 18-year-old’s hockey journey will take place on Oct. 6 and 7, as he’s is eligible to be selected at this year’s National Hockey League Draft.

Wiesblatt is ranked 19th overall among North American skaters by NHL Central Scouting and is projected to be selected anywhere from late in the first round to the middle of the second round by various scouting services and draft rankings.

“Being drafted is something that I’ve always dreamed of, but that’s only one part of the process and the hard work starts after that,” Wiesblatt said.

“When you are talking with teams that you grew up watching, it’s a really special time. I’m definitely not taking it for granted and I’m super grateful to have this opportunity.”

After posting 39 points in 64 games during his rookie campaign with the Raiders, Wiesblatt increased his scoring output in 2019-20 as he was second in team scoring with 70 points in 64 contests.

He also took part in the CHL Top Prospects Game in Hamilton, Ont. in January and had an assist for Canada’s silver medal winning side at the Hlinka Gretzky Cup last August.

“Anytime that you can get a few games under your belt before the season starts is a huge advantage and to be able to represent Canada at the Hlinka was a really cool experience,” Wiesblatt said.

“I think my confidence was a lot higher going into last year, especially after we came off of a season where we won a championship. I’ve also been lucky enough to have ‘Habby’ (head coach Marc Habscheid), ‘Truy’ (assistant coach Jeff Truitt) and (assistant coach) Dan (Gendur) put a lot of trust in me to make moves in the offensive zone and be given key roles in the defensive zone.”

Like everyone else in the WHL, Wiesblatt is also counting days until the new campaign gets underway, which is currently slated for Dec. 4.

“I think there’s a lot that we can build off of from last season,” Wiesblatt said. “We were close to winning our second straight East Division title (when the season ended due to the COVID-19 pandemic) and I think we got a group of guys that can do it again.

“We just have to make sure that we are all working hard in order to accomplish that.”

Wiesblatt is one of four Raiders players that have been ranked by NHL Central Scouting for this year’s draft.

The others are fellow forward Ilya Usau and blueliners Kaiden Guhle and Landon Kosior.