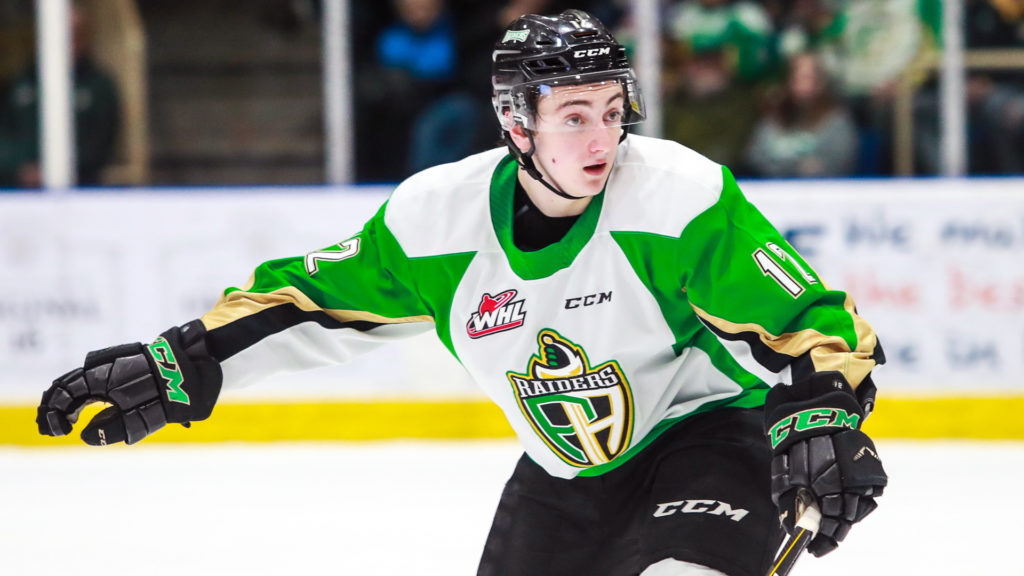 Heading into last season, Landon Kosior had a couple of options when it came to his hockey future.

After posting 52 points in his sophomore season in the Midget AAA ranks with the Tisdale Trojans, the then 17-year-old could have stayed in his home province to play in the Western Hockey League for the Prince Albert Raiders, or he could have ventured south of the border to suit up for the Chicago Steel of the United States Hockey League.

In the end, the Regina product elected to sign with the Raiders and put up 23 points in 64 games during his rookie campaign to finish tied for second with Zack Hayes on the team in defensive scoring and third among all first-year blueliners in the league.

“When I came into the league, I really didn’t know what to expect, but the year couldn’t have gone any better,” Kosior said.

“I was lucky to come into a team with a lot of great veterans and leaders. Everyone welcomed me with open arms and it really helped to make the transition into the WHL a lot easier for me.”

Related Links
Prince Albert Daily Herald 2020 NHL Draft
Kosior was also able to learn a lot from overage blueliners Hayes and Jeremy Masella, who he was paired with on multiple occasions during the 2019-20 campaign.

“I was able to pick up so many tips from them, even just by watching how they played,” Kosior said.

“They are both so good defensively and they really know how to take care of things in their zone. Plus, they also taught me a lot on how to treat my body off of the ice.”

The only drawback to Kosior’s rookie season was the fact that the year was cut short in March due to the COVID-19 pandemic.

At the time, the Raiders had a 36-18-6-4 record and were five points ahead of the Winnipeg ICE in the race for first place in the East Division with four games left on their schedule.

“We were on a bit of a run there (a 7-3 record in their last 10 games) before the season was cancelled and I think we were poised to make a pretty good run,” Kosior said.

During the elongated off-season, which is projected to end in early December when the WHL hopes to start the upcoming campaign, Kosior has kept himself busy in a variety of ways.

“I’ve been trying to stay in the gym and I’ve been skating lots since everyone could get back on the ice here in Saskatchewan,” Kosior said. “I’ve also been playing a lot of different sports like golf, tennis and basketball. It’s added to my cardio and I’ve been able to work out different muscles that I wouldn’t spend as much time working on if I was only playing hockey.

“I’ve also started doing yoga for the first time this off-season, which has been good for stretching out my muscles and helping me relax. If you are just lifting a lot and not really stretching, it could cause injuries, so the yoga is helping with preventing that from happening and it’s also helping to keep my body loose.”

In between his training and celebrating his 18th birthday last month, the upcoming NHL Draft is also on the back of Kosior’s mind.

He’s ranked 98th among North American skaters by NHL Central Scouting and could be picked on the second day of this year’s draft, which is being held virtually on Oct. 6 and 7.

“I’ve tried to not think about it too much, but it’s something that’s always on your mind and it (being drafted) is something that I’ve wanted since I was a kid,” Kosior said.

“Being able to talk with scouts from the NHL teams is something that not many people get to experience, so I’ve been grateful for that. I’m going into the draft with an open mindset and hopefully I’ll be lucky enough to be picked.”

In addition to going through this year’s draft process with Raiders teammates Kaiden Guhle, Ozzy Wiesblatt and Ilya Usau, who are all eligible to be picked next month, Kosior also gained some insight into what prospects experience from former Trojans goaltender and teammate Roddy Ross.

“Roddy (who spent the last two years with the Seattle Thunderbirds before being dealt to the Regina Pats in April) went through the draft process last year (before being picked by the Philadelphia Flyers in the sixth round) so I was able to see firsthand what he went through,” Kosior said.

“That gave me a really good idea of what everything would be like for me as I went into my draft year.”