Guhle Enjoying Lead Up to the NHL Draft 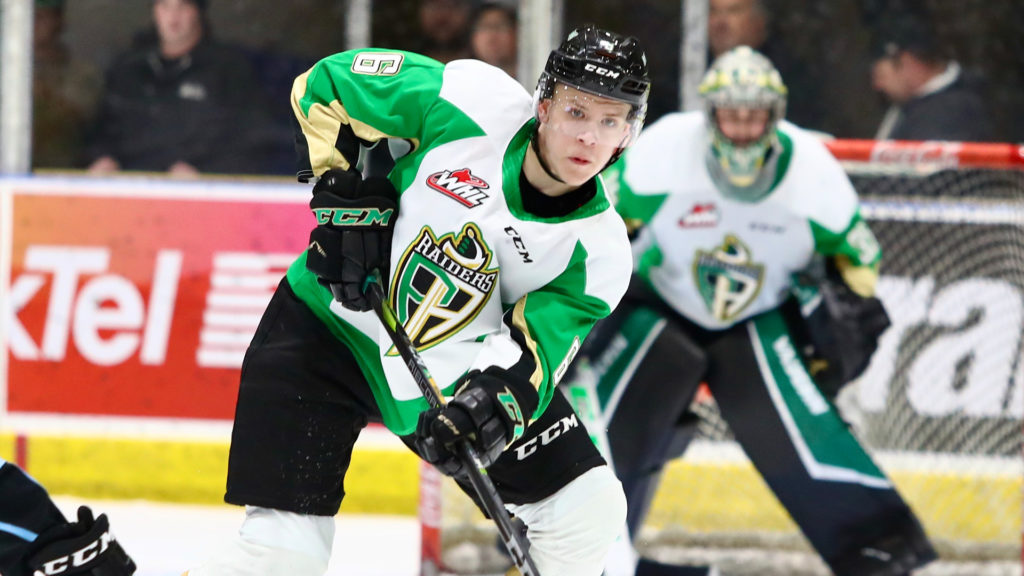 The waiting is almost over for Prince Albert Raiders defenceman Kaiden Guhle.

After a delay due to the COVID-19 pandemic, the 18-year-old blueliner from Sherwood Park, Alta. will hear his name called during the 2020 National Hockey League Draft, which will be held virtually on Oct. 6 and 7.

“Everything leading up to the draft has been unbelievable,” Guhle said. “Having the chance to go to the CHL Top Prospects Game (which was held in Hamilton, Ont. in January) was really cool as I had the chance to meet a lot of great people during that week.

“There’s been a lot of Zoom calls and questionnaires with NHL teams over the last couple of months as they are trying to make it as much like the Draft Combine as possible in these times. Every time that you get the chance to talk to a team is an hour and you want to make a good impression on them. They know what you can do on the ice…and now you are showing them what your personality is like off the ice.”

If he’s selected on the opening day of the draft, he will become the first Raiders player to be picked in the first round since Leon Draisaitl was taken third overall by the Edmonton Oilers in 2014.

While the process heading into the 2020 NHL Draft has been vastly different than in normal seasons, Guhle has been able to get a lot of advice from people leading into the event, especially from his older brother and former Raider blueliner Brendan.

“He’s been a huge help through this whole process,” Guhle said of his brother, who was a second round pick by the Buffalo Sabres in 2015. “The best advice that he gave me was to just be myself when talking to all teams as they’ll want to pick you for the type of person that you are.

“I also learned a lot from watching (Brett) Leason and (Aliaksei) Protas last year when they were being interviewed by teams after games. I’ve asked them what certain teams were like and they’ve let me know what teams are tougher interviews than others.”

The first overall pick by the Raiders in the 2017 Western Hockey League Bantam Draft, Guhle saw his scoring numbers increase after moving into a more prominent role in his sophomore campaign.

Following a 17-point showing in 65 games during his rookie campaign, he was sixth in team scoring and led all blueliners with 40 points in 64 contests during the shortened 2019-20 season.

While his offensive contributions are what stand out to some, Guhle himself was pleased with the growth that he made in his defensive game last year.

“I got introduced to being in that role during the Hlinka Gretzky Cup in the summer (where he won a silver medal with Team Canada), but I knew going into my second season in Prince Albert that I would be moving into more of a defensive role and having more minutes,” Guhle said.

“I thought that I was able to adjust really well to that and as the season went on, I got better with my reads and I wasn’t being too aggressive out there.”

Guhle also moved into more of a leadership role with the team as he was able to use the lessons he learned from the veteran players he suited up with during the Raiders’ run to the WHL title in 2019.

“When I came to Prince Albert as a 16-year-old, I didn’t know what the culture was going to be like,” Guhle said. “The older guys did a great job of helping us out, especially for (rookie players) Ozzy, Brooksy (Jakob Brook) and I.

“Towards the end of that year, I watched the things that they would be doing as I knew I would be put into that role going forward. “

Since the WHL went on hiatus in March due to the COVID-19 pandemic, Guhle has kept himself busy to make sure that he’s ready to go for when training camp gets underway for the 2020-21 season.

“I’ve been trying to do as much as I can after being stuck inside for so long,” Guhle said. “You get pretty sick and tired of sitting on the couch and watching Netflix all day.

“Off the ice, I’ve put on a little bit more muscle this year as I’ve tried to take advantage of having more time in the gym, especially after our run last year and the shorter off-season that we had. I’ve also been working with a lot of different skill coaches on the ice to see what I can improve on, such as with my edge work.”

Guhle also had an opportunity to take part in Hockey Canada’s virtual summer camp in July for next season’s tournament, which is slated to be held in Edmonton at a yet to be determined date.

“They kept it pretty similar to what they do at the summer camps for the Under-17 and Under-18 teams, except for the fact that we didn’t have the chance to go out on the ice,” Guhle said. “The main goal of the week was to have us get to know one another so that we aren’t all strangers if we have a camp leading up to the tournament.

“It would be incredible to have the chance to play at the World Juniors, but my bigger focus right now is to help the Raiders bring home another WHL title. We’re going to have a lot of returning guys from last year and everyone will have to step up into bigger roles.”