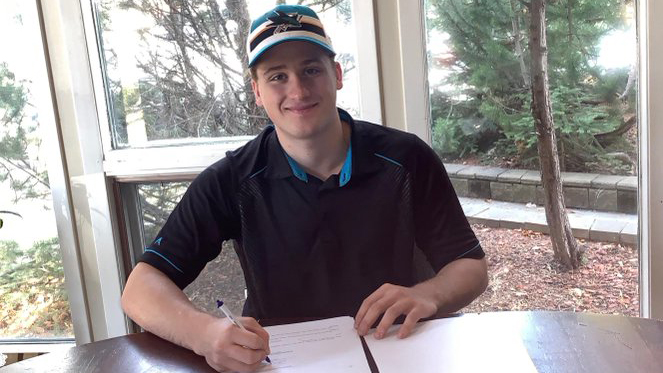 Wiesblatt was selected 31st overall in the 2020 NHL Draft by the Sharks on October 6.

“Ozzy brings speed, playmaking, and offense to the lineup, which makes it difficult to play against a talented skater like him,” said Sharks General Manager Doug Wilson in a team press release. “His tenacity for the puck paired with his ability to retain possession and drive the offensive side of the game, along with his character on and off the ice, makes him a valuable player for our organization.”

We have signed @ozzywiesblatt to a standard, entry-level contract!

The Calgary product wrapped up second season in the WHL with 25 goals and 45 assists in 64 games. His 70 points placed him second on the team in scoring. He also finished second in assists and third in goals.

Related Links
San Jose Sharks Press Release
In his WHL career, Wiesblatt has 110 points (41 goals, 69 assists) in 129 career games. He chipped in five goals and five assists while playing in all 23 games on the Raiders’ WHL Championship squad in 2019.

The 2020-21 WHL season will begin on Friday, January 8, 2021 as announced by the WHL’s Board of Governors earlier this week. For more information, click here.