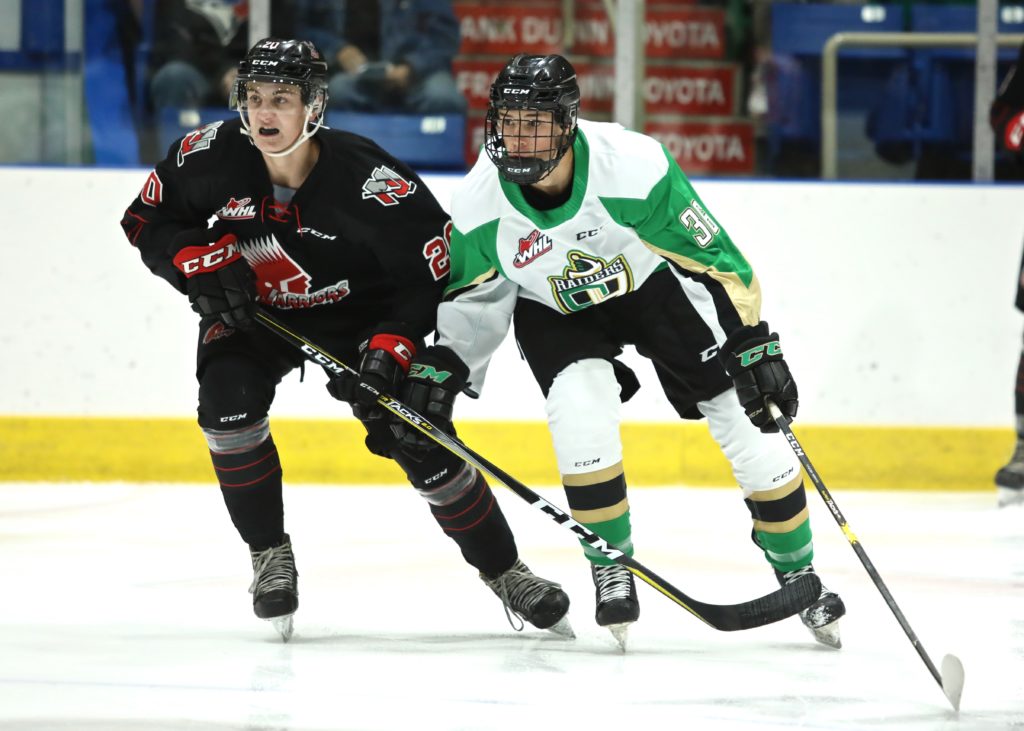 RAIDER REVIEW: The Raiders (1-1-0-0)  continue the WHL Pre-season tonight as they head to Moose Jaw tonight to take on the Warriors (1-3-0-0) at Mosaic Place. Last night in Warman, the Raiders late push fell short as they dropped a 4-3 game to the Saskatoon Blades. Spencer Moe, Cole Nagy, and Ozzy Wiesblatt were the goal scorers for the Raiders.  In his first action of the pre-season, Brett Balas stopped 21 shots in the loss.

BACK TO BACK: With a goal last night against the Saskatoon Blades, Ozzy Wiesblatt scored in consecutive contests.  Last season, the Calgary, AB product scored in back-to-back games twice, including a three-game goal-scoring streak from Feb. 18 to 23. He also scored in consecutive games once during the WHL Playoffs. In his rookie season, Wiesblatt finished with 15 goals and 24 assists during the regular season and added five goals and five assists in the post-season.

ON THE BOARD: Cole Nagy picked up his first point of the WHL Pre-season on Friday night in Warman. Last season, Nagy tied for second in scoring in the Saskatchewan Midget AAA Hockey League with 65 points (26 goals and 39 assists) in 44 games for the Saskatoon Blazers. He added four goals and eight assists in 13 playoff games.

POWER PLAY: The Raiders scored their first power-play goal of the WHL Pre-season on Friday night in Warman. Last year, the Raiders converted on 22% of their power-play opportunities during the regular season. In the WHL Playoffs, they upped that number and scored on 23.7% of their chances with the man advantage.

NEXT UP: The Raiders start a home-and-home series with the Regina Pats (2-1-0-1) at the Brandt Centre to close out the WHL Pre-season on Friday night. On Saturday, the two teams meet at the Art Hauser Centre in their Pre-season finales. Puck drop is 7 p.m. The Raiders open the 2019-20 WHL Regular Season on Friday, September 20 when they take on the Saskatoon Blades where the team will raise the 2019 WHL Championship banner prior to the game. Single-game tickets are now on sale. Tickets are available at the Raiders Office and online here.