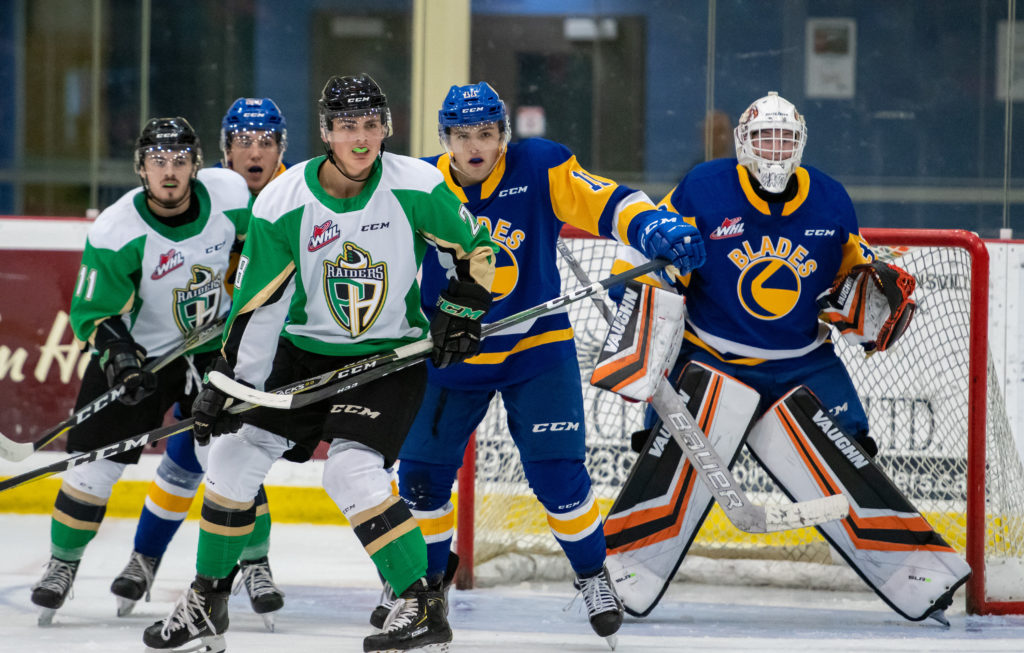 Warman, SK – The Prince Albert Raiders (1-1-0-0) fought hard in the third, but were unable to complete their comeback as they dropped their first game of the 2019 WHL Pre-season 4-3 to the Saskatoon Blades at The Legends Centre in Warman.

Seven different Raiders picked up points in the loss with Spencer Moe, Cole Nagy, and Ozzy Wiesblatt finding the back of the net.

The Blades jumped out to a lead 6:59 into the contest. Hayden Smith found a loose puck on the right side of the goal and potted it into the empty side of the cage to make it a 1-0 game.

With 5:02 to play in the opening period, Ryan Hughes gave Saskatoon a two-goal advantage. He got the puck in the slot, deked around a defender and beat Brett Balas.

Saskatoon added another before the end of the first. Brandon Lisowsky set up Kyle Crnkovic with a one-timer and the Blades’ forward got his shot past Balas to put Saskatoon up 3-0 at the end of 20 minutes.

In the second, the Raiders got on the board thanks to their special teams. Just as a four-on-four situation turned into a power play for the Raiders, Justin Nachbaur saucered a cross-ice pass that found Wiesblatt and the Calgary product deposited his second goal of the WHL Pre-season.

Just before the end of the second, the Blades restored their three-goal advantage. Lisowsky set up a Crnkovic with another one-timer and the 10th overall pick in the 2017 WHL Bantam Draft tallied his second of the contest.

The Raiders cut the lead in half 7:37 into the third period. Nagy found a loose puck at the side of the Blades goal and scored his first of the pre-season schedule to make it a 4-2 game.

About four minutes later, Moe wrapped around the back of the Blades’ goal and beat Ethan Chadwick with a backhanded to bring the Raiders back within one with 8:13 to go.

The Raiders were able to press hard in the final moments of the game. With a power-play opportunity and the net empty, Wiesblatt sent a deflection just past the post and Kaiden Guhle’s blast from the point trickled through Chadwick, but was swept away from harm.

In total, the Raiders fired 42 shots on the Blades goaltender and Chadwick stopped 39 of them. For the Raiders, Balas made 21 saves in his first appearance of the WHL Pre-season.

The Raiders are back in action on Saturday night when they travel to Moose Jaw to face off against the Warriors (1-3-0-0) at Mosaic Place. Game time is 7 p.m. Keep up to date with Saturday’s game by downloading the Raiders App for iOS and Android devices.

The next Raiders’ home game is on Saturday, Sept. 14 in their pre-season finale against the Regina Pats. The opening faceoff is 7 p.m. Tickets are $10 for adults and students and $5 for children 12 and under.