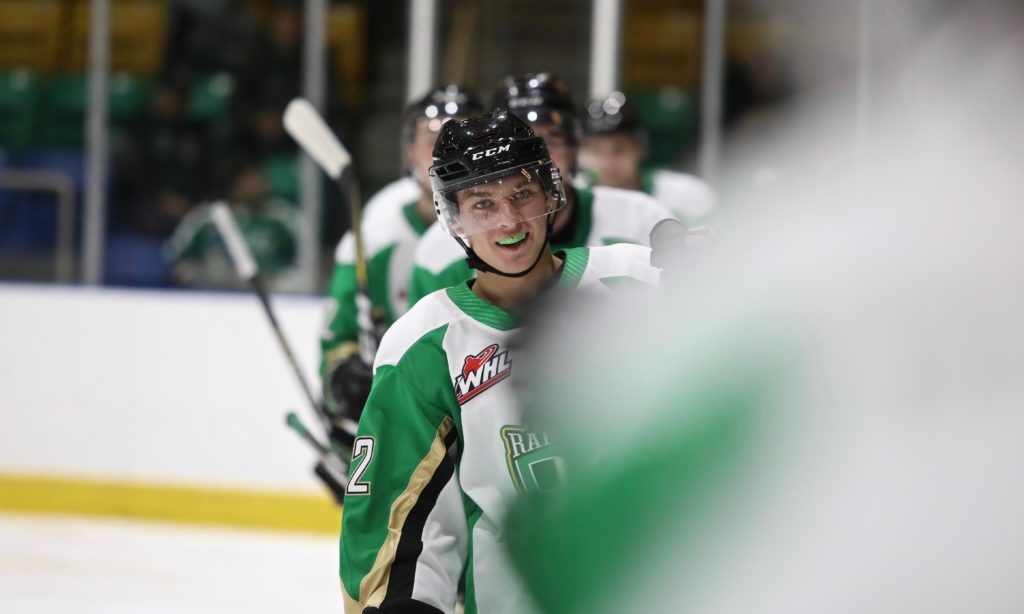 After a scoreless first period, the Raiders broke the deadlock 1:52 into the middle frame. Herman tipped an Ilya Usau shot through the five-hole of Warriors goaltender Jackson Berry.

Just over a minute later, Clark extended the Raiders’ lead. Berry kicked out a rebound from Tyson Laventure’s shot that found the stick of Clark. The blueliner from Langely, BC, who was filling in at left wing for the evening, buried the rebound to make it 2-0.

About a minute later, the Raiders extended the lead to three. Landon Kosior led Wiesblatt behind the Warriors’ defence with a stretch pass, sending the Calgary, AB product in on a breakaway. Wiesblatt snapped a shot past Berry to end the stretch of three goals in less than three minutes.

The Raiders held the lead until there was 6:47 left to play. Eric Alarie finished off a cross-ice one-timer on a Warriors’ power play to break Raiders goaltender Boston Bilous’ shutout bid.

Nine seconds later, the Warriors cut the lead to one. Tate Popple found the back of the net after beating a scrambling Bilous.

It was as close as the Warriors came to tying the game. While killing a penalty, Herman got the puck at the blueline. He spotted Berry heading to the bench for the extra attacker and the The Pas, MB product hit the open cage from the neutral zone with 1:15 to play, wrapping up the scoring.

Bilous played the full game in his WHL Pre-season debut, stopping 29 shots for the win. Berry made 26 saves in the loss for the Warriors.

Up next for the Raiders is a trip to Warman to take on the Saskatoon Blades (1-0-1-0) at The Legends Centre on Friday night. Puck drop is 7 p.m. The Raiders’ next home WHL Pre-season game is on Saturday, September 14 against the Regina Pats (1-1-0-1), which is also the exhibition finale.