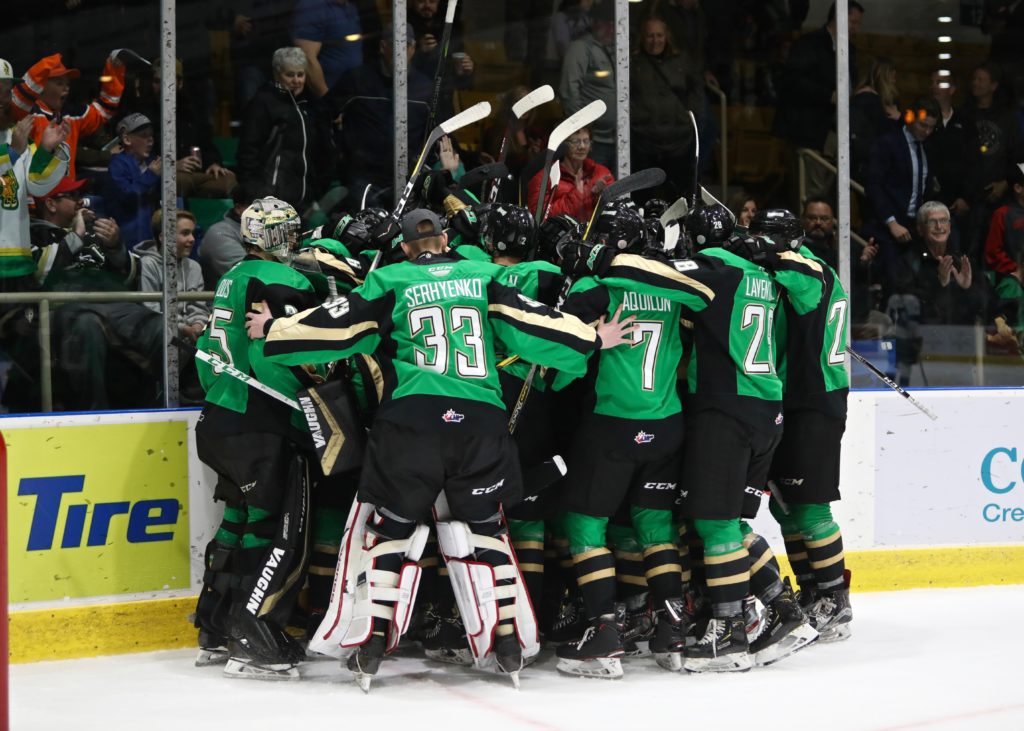 It was Masella’s second career game-winning goal and first in overtime. Aliaksei Protas led the Raiders with a goal and an assist in the win.

Protas opened the scoring 4:51 into the first period. The Washington Capitals prospect toe-dragged to the centre of the zone and snapped a shot past goaltender Gage Alexander low blocker for his third of the year.

Boston Bilous did his best to preserve the one-goal lead in the opening frame. He robbed Nino Kinder with a sprawling glove save shortly after the goal. Then, he pulled a fanned shot by Isaac Johnson off the goal line with his stick.

In the second, the Raiders increased their lead at the 7:09 mark. Fonstad touched a pass ahead to Ilya Usau. The rookie centre streaked down the left wing, kept on the two-on-one, and beat Alexander short side for his first career WHL goal.

The ICE got back into the game in the third period. Michael Milne got the puck in the corner, cut across the goal mouth, and tucked it in around Bilous’ stretched pad to make it a 2-1 game 2:27 into the final frame.

Midway through the third, the ICE found the equalizer. Cole Muir won a battle behind the net and threw a puck into the slot. Austin Schellenberg was on the other end of the pass and wired a shot past Bilous to level the score at 2-2.

The Raiders were robbed of the go-ahead goal late in the third. On a short two-on-one, Alexander slid across to rob Cole Nagy of a sure goal to send the game to overtime.

In the extra frame, Masella jumped onto the ice on a line change. Protas won the puck in the corner and found the Phoenix, AZ product in the slot. Masella stepped into a wrist shot and the puck got through Alexander to end the game.

Bilous picked up his third consecutive win with a 16-save effort. At the other end, Alexander made 21 saves in his WHL debut.

The Raiders continue their homestand on Friday night when the Saskatoon Blades (1-2-0-0) make their second trip to the Art Hauser Centre this season. Puck drop is 7 p.m.

Then on Saturday, the Raiders host the Regina Pats on Ozzy Wiesblatt Bobblehead Night Presented By Canadian Tire. Get your bobblehead with a minimum $2 donation. Proceeds from the bobblehead will be donated to Jumpstart Prince Albert.

Tickets for both games can be purchased at the Raiders Office and online here.