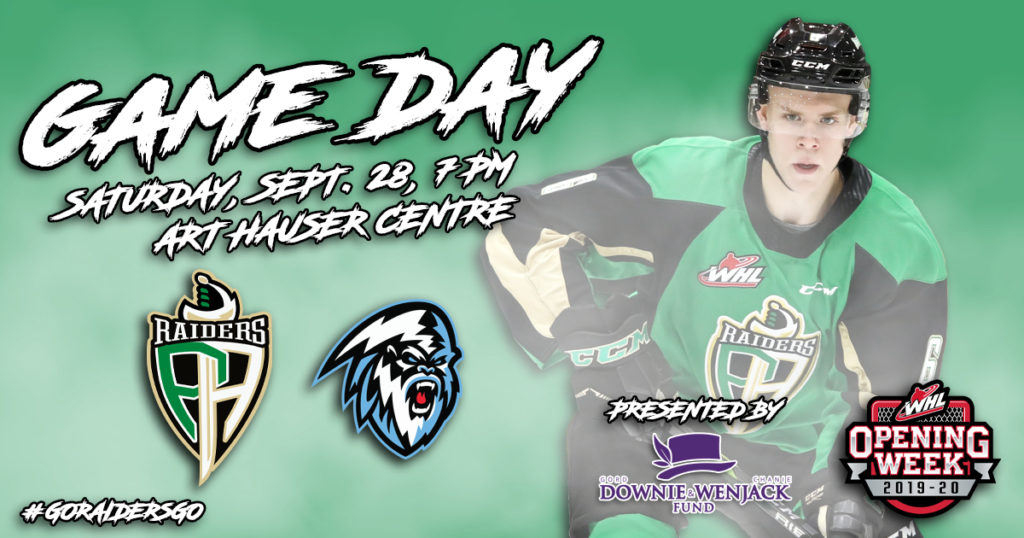 RAIDER REVIEW: The Raiders (2-0-1-0) start a six-game homestand tonight against the Winnipeg ICE (2-1-0-0) at the Art Hauser Centre. Last night in Regina, the Raiders scored five unanswered goals to beat the Pats 5-2 at the Brandt Centre. Aliaksei Protas, Brayden Watts, and Ozzy Wiesblatt each had three points in the third period. Boston Bilous earned the win with a 23-save performance.

FIRST THINGS FIRST: Friday was a night of firsts for the Raiders. Evan Herman and Cole Nagy tallied their first career WHL goals in Regina against the Pats. Also, newly acquired Brayden Watts scored his first goal as a member of the Raiders, which held up to be the game winner.

STARTING STRONG: Washington Capitals prospect Aliaksei Protas has started his sophomore season in the WHL with a three-game point streak. Over that span, he has two goals and three assists to lead the team in points.

HELPING HAND: Ozzy Wiesblatt set a new career high for assists in game with three in Friday night’s win over Regina. He recorded two assists in a game twice last season. Wiesblatt also tied a career high for points in a game with three. His other three-point outing was February 23, 2019 against the Brandon Wheat Kings. In that game, the 2020 NHL Draft eligible prospect had a goal and two assists.

BACK IN THE LINEUP: Jakob Brook returned to the Raiders’ lineup on Friday night after recovering from an injury suffered in the offseason. The Roblin, MB product had an assist in his first game of the year.

POWERING UP: The Raiders scored their first power-play goal of the season on Friday night in Regina. After three games, the Raiders are 1/9 with the man-advantage.

NEXT UP: The Raiders continue their homestand on Friday night when the Saskatoon Blades (1-2-0-0) visit the Art Hauser Centre. Puck drop is 7 p.m. Tickets are available at raiderhockey.com and at the Raiders Office.