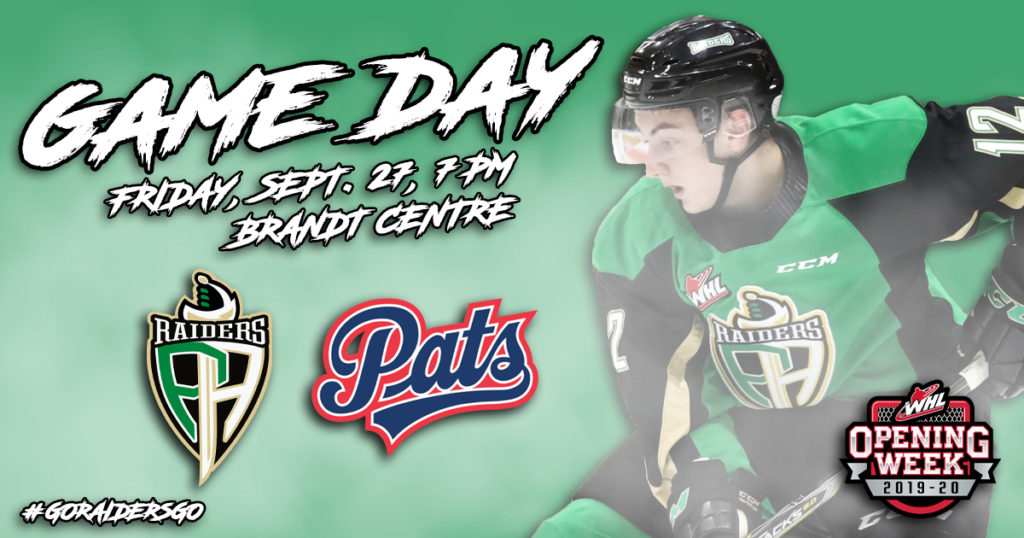 RAIDER REVIEW: The Raiders (1-0-1-0) open their six-game season series with the Regina Pats tonight at the Brandt Centre. Last weekend, the Raiders shutout the Saskatoon Blades 1-0 at SaskTel Centre. Cole Fonstad scored the Raiders’ lone goal of the game with 7:58 to play. Aliaksei Protas set up the goal with a drop pass at the blueline. Boston Bilous earned his first shutout as a Raider with a 26-save performance.

SHUTTING THE DOOR: Boston Bilous recorded his second career shutout on Saturday in Saskatoon against the Blades. It was the first Raiders’ 1-0 shutout victory since October 17, 2015 when Ian Scott made 33 saves. Austin Glover scored the only goal of the game with 14 seconds to play in the third.

COMING UP CLUTCH: Cole Fonstad scored the goal that gave the Raiders their first win of the season on Saturday. It was Fonstad’s 11th career game-winning goal, which leads all active Raiders. The closest player is Max Martin with five career game winners.

EVEN: On Saturday, the Raiders and Blades both had 26 shots on goal. It was the first time in 33 regular season games that the Raiders tied their opponents on the shot clock. The last time was a 4-2 win over the Blades on Dec. 28, 2018.

MAKING MOVES: The Raiders acquired 1999-born winger Brayden Watts from the Vancouver Giants on Tuesday. Watts, from Bakersfield, CA, had 12 goals and 26 assists in 57 games for the Giants last season. He added seven goals and three assists in the 2019 WHL Playoffs. His 254 career WHL games is the most among active Raiders.

SIGNED: On Tuesday, the Raiders announced the signing of 2004-born defenceman Tre Fouquette. The blueliner from Warman is playing for the Prince Albert Mintos of the SMHL this season.

NEXT UP: The Raiders are back at home on Saturday night when the Winnipeg ICE come to the Art Hauser Centre. Puck drop is 7 p.m. Saturday’s game is in support of The Gord Downie & Chanie Wenjack Fund. Tickets are available at the Raiders Office and online here.