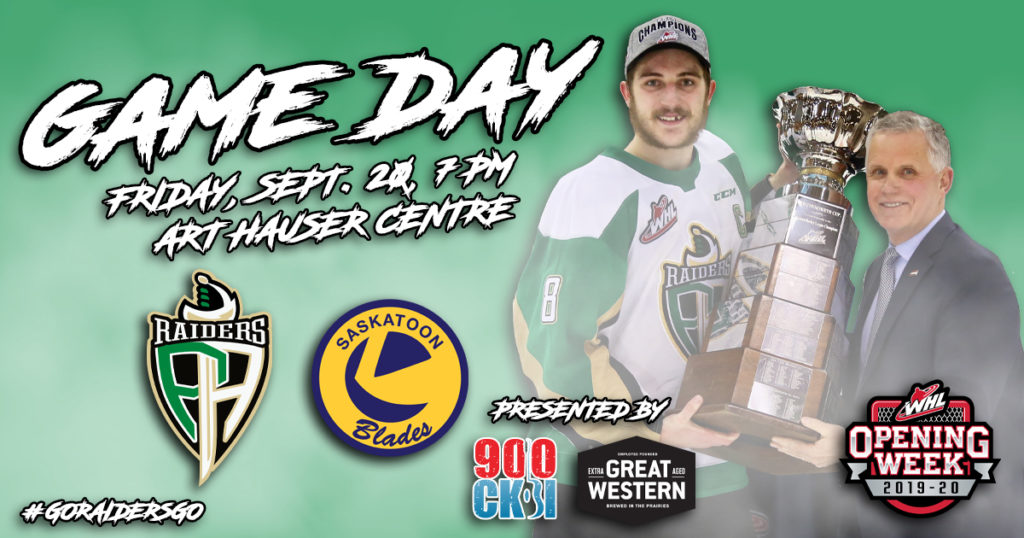 NEW SEASON: The Raiders begin the 2019-20 regular season as the defending WHL Champions after defeating the Vancouver Giants in a seven-game series in the 2019 WHL Rogers Championship. Tonight is the first of 10 meetings between the Raiders and the rival Saskatoon Blades.  New faces will populate the Raiders’ lineup this season as the Opening Night roster features 11 players designated as rookies, though seven have already played in a regular season game.

WELCOME BACK: Raiders forward Aliaksei Protas was returned to the team from the Washington Capitals on Thursday. Protas, who was drafted in the third round by the Capitals in June’s NHL Entry Draft, suited up in two preseason games with the Capitals, scoring once and adding two assists.

MOE’S MILESTONE: Spencer Moe played in his 200th career WHL game as the 2018-19 regular season came to a close. Moe, a second round pick of the Raiders in the 2015 WHL Bantam Draft, has 24 goals and 45 assists with the club. Last season, the Calgary, AB product tied his career high in goals (nine) and set a new career high in assists (24) and points (33).

PROSPECT WATCH: Raiders prospect Tre Fouquette was named to Team Saskatchewan for the upcoming WHL Cup on Tuesday afternoon. The defenceman from Warman was drafted in the fourth round of the 2019 WHL Bantam Draft and will play for the Prince Albert Mintos this season.

NEXT UP: The Raiders and Blades meet again on Saturday night in Saskatoon to close out the season-opening home-and-home series at 7 p.m. The next Raiders’ home game is on Saturday, September 28 when the Winnipeg ICE come to Prince Albert. Game time is 7 p.m. Tickets are available at the Raiders Office and online here.