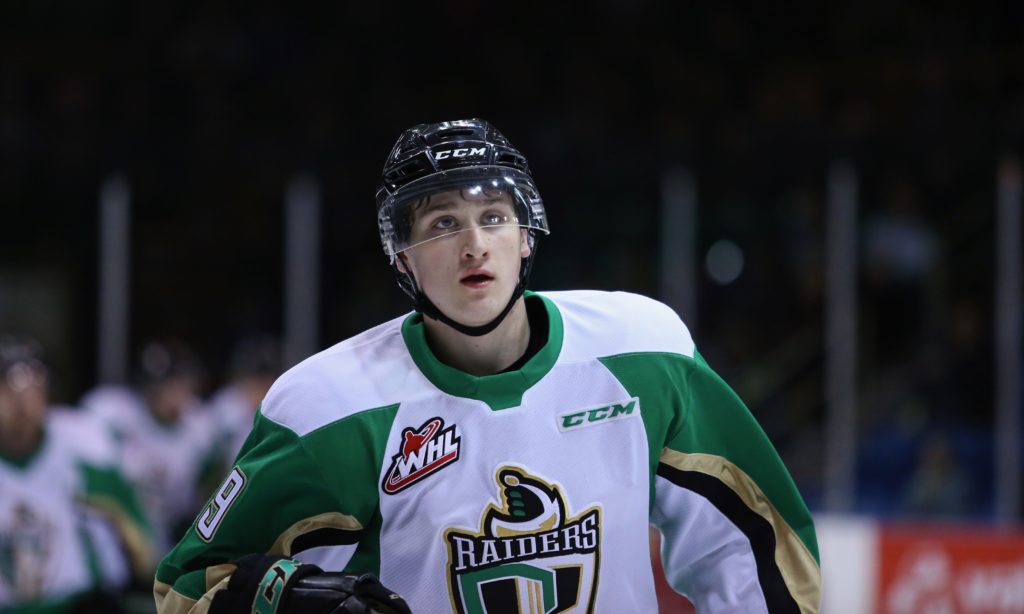 Regina, SK – Ozzy Wiesblatt scored his fourth and fifth goals of the WHL Pre-season and Ilya Usau tallied the shootout winner as the Prince Albert Raiders (3-1-0-0) picked up a 3-2 win over the Regina Pats (2-2-0-2) on Friday night at the Brandt Centre.

Wiesblatt has now scored in all four of the Raiders’ pre-season contests this year.

In the first, the Raiders killed off the first three penalties of the night. However, on their fourth penalty kill of the opening period, Austin Pratt opened the scoring for the Pats with 26 seconds remaining.

Wiesblatt levelled the score at the 7:43 mark of the second period. He beat goaltender Dean McNabb with an unassisted marker shortly after a Raiders’ power play had expired.

Approximately four minutes later, the Calgary product capitalized on a power play. Wiesblatt finished off a play with assists from Usau and Kaiden Guhle, giving the Raiders a 2-1 advantage after 40 minutes.

Early in the third, the Pats tied the game. Ty Kolle made it a 2-2 game with his third of the pre-season at the 2:01 mark.

That score held through the remainder of the game and through a five-minute, three-on-three overtime period.

In the shootout, Usau scored for the Raiders. At the other end, newly-signed Carter Serhyrenko stopped Kolle, Pratt, and Robbie Holmes to backstop the Raiders to the win.

Serhyenko was between the pipes for the third period and overtime. He stopped 14 of 15 shots to get the win in his debut. Boston Bilous played the first two periods for the Raiders. He turned aside 12 Regina attempts on goal. For the Pats, McNabb made 30 saves in a losing effort.

The two teams will meet again on Saturday night at the Art Hauser Centre. Puck drop is 7 p.m. Tickets are $10 for adults and students, and $5 for children 12 and under.

The 2019-20 Home Opener Presented by 900 CKBI and Great Western Brewing is Friday, September 20 when the Saskatoon Blades visit the Art Hauser Centre. Be in your seats for 6:55 p.m. for the evening’s opening ceremony. Single-game tickets are now available for purchase. Pick up your tickets at the Raiders Office and online here.