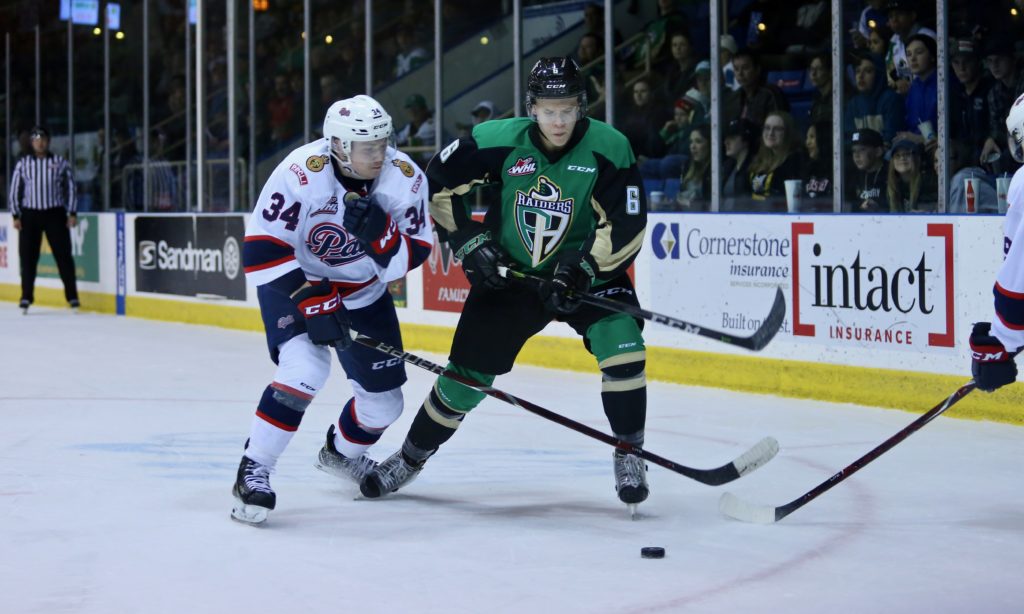 RAIDER REVIEW: The Raiders (2-1-0-0)  enter the final weekend of the WHL Pre-season tonight at the Brandt Centre as they face off against the Regina Pats (2-2-0-1). Last weekend, the Raiders beat the Moose Jaw Warriors 3-2 at Mosaic Place. Justin Nachbaur led the way with three assists. Evan Herman and Ilya Usau each had a goal and an assist. Ozzy Wiesblatt rounded out the scoring with a shorthanded goal. Boston Bilous got the victory with 24 saves.

ON THE LIST: Kaiden Guhle cracked TSN Director of Scouting Craig Button’s Top 31 players for June’s NHL Entry Draft. Guhle was ranked 22nd on Button’s list and was one of five WHLers to make Top 31.

ACQUIRED: On Wednesday, the Raiders acquired 2001-born defenceman Remy Aquilon from the Victoria Royals in exchange for a 2020 WHL Bantam Draft pick. Aquilon, a product of Kelowna, BC, is a veteran of 57 regular season games and an additional 15 WHL Playoffs contests over the past two seasons with the Royals.

NEXT UP: The Raiders and Pats close out their WHL Pre-season schedules on Saturday night at the Art Hauser Centre . Puck drop is 7 p.m. The Raiders open the 2019-20 WHL Regular Season on Friday, September 20 when they take on the Saskatoon Blades where the team will raise the 2019 WHL Championship banner prior to the game. Be in your seats by 6:55 p.m. for the opening night festivities.