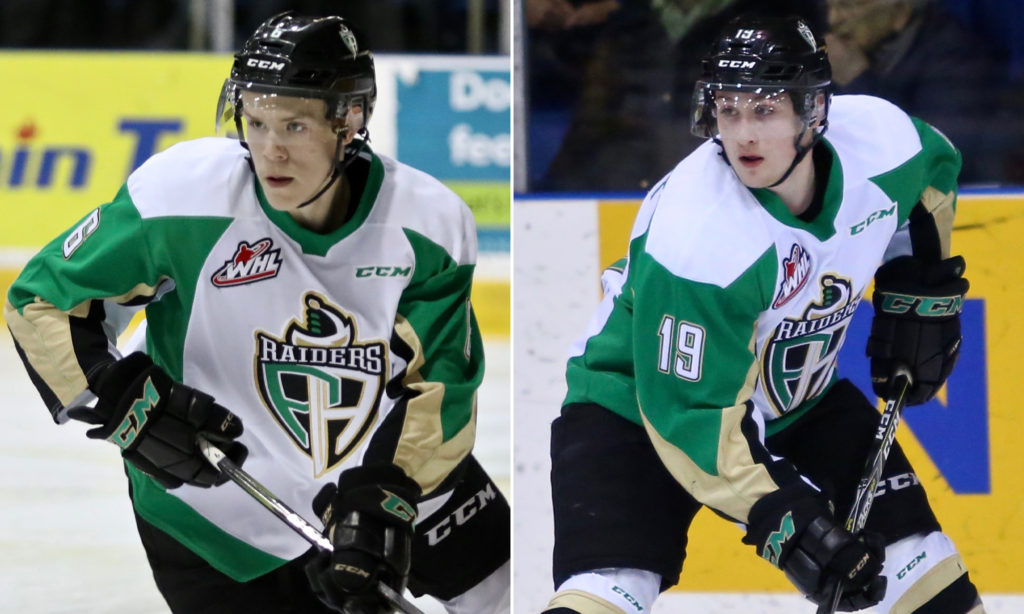 On Tuesday, defenceman Kaiden Guhle and forward Ozzy Wiesblatt were named to Team Canada for the 2019 Hlinka Gretzky Cup, which runs from Monday, August 5 to Saturday, August 10 in Breclav, Czech Republic and Piestany, Slovakia.

The duo are the first Raiders to be named Canada’s team for the tournament since Ian Scott stood between the pipes in 2017.

This will be the second time that Guhle and Wiesblatt have represented their country. This past November, both players took part in the World Under-17 Hockey Challenge. Guhle was named captain of Canada Red, while Wiesblatt was an alternate for Canada Black.

NEWS | 2️⃣2️⃣ players will wear the 🍁 in the Czech Republic and Slovakia as @HC_Men chases another gold at the #HlinkaGretzkyCup.

“We were pleased with the level of competition at selection camp, and our staff is confident in the 22 players that have earned their spot on Team Canada for the Hlinka Gretzky Cup,” said Brad McEwen, head scout for the Program of Excellence, in a Hockey Canada release. “The skill and intensity showed by all 44 players at camp made our decisions difficult, but we know our players and staff will embrace the opportunity to wear the Maple Leaf as we look to bring home a gold medal.”

Guhle and Wiesblatt completed their first season in the WHL as they helped the Raiders claim the Ed Chynoweth Cup as WHL Champions.

Guhle scored three goals and added 14 assists in 65 games with the Raiders in his debut season. He chipped in three assists during the Raiders’ playoff run.

Wiesblatt finished his rookie season with 15 goals and 24 assists in 64 games. In the 2019 WHL Playoffs, Wiesblatt scored five goals and added five assists in 23 games.

Before the tournament gets underway, Canada will face off against Slovakia in an exhibition contest on Saturday.

Canada opens the 2019 Hlinka Gretzky Cup on Monday morning against Finland. Game time is 7:30 a.m. CST. TSN will be broadcasting all of Canada’s games at the tournament. Canada will also square off against Switzerland and Czech Republic in the round robin.

Russia, Slovakia, Sweden, and the United States make up the other group at the eight-team tournament.

The Hlinka Gretzky Cup is an annual tournament which has been known as the U18 Junior World Cup and the Pacific Cup. In 2004, the tournament was renamed the Ivan Hlinka Memorial following the death of the Czech hockey star.

Canada has been very successful at the tournament, winning the gold medal 22 times in the 28-year history of the event. As the host nation last year, Canada defeated Sweden 6-2 in the gold-medal match.

Season tickets for the 2019-20 campaign are now available. Visit or call the Raiders Office for more information, or click here.